As we have discussed earlier on this blog, film ephemera have evolved from the simple stereotypical style when there were lots of strict conventions, such as presenting the film title and a close-up still of the lead actor or actress, to a variety of elaborate designs. Beginning in the 1980s, as all aspects of film diversified, film poster artists developed their own style. Today, film ephemera, the direct form of film promotion, are no longer merely commercial media; they have been established as a place for artists to display their interpretation of each film, beyond the movie screen. 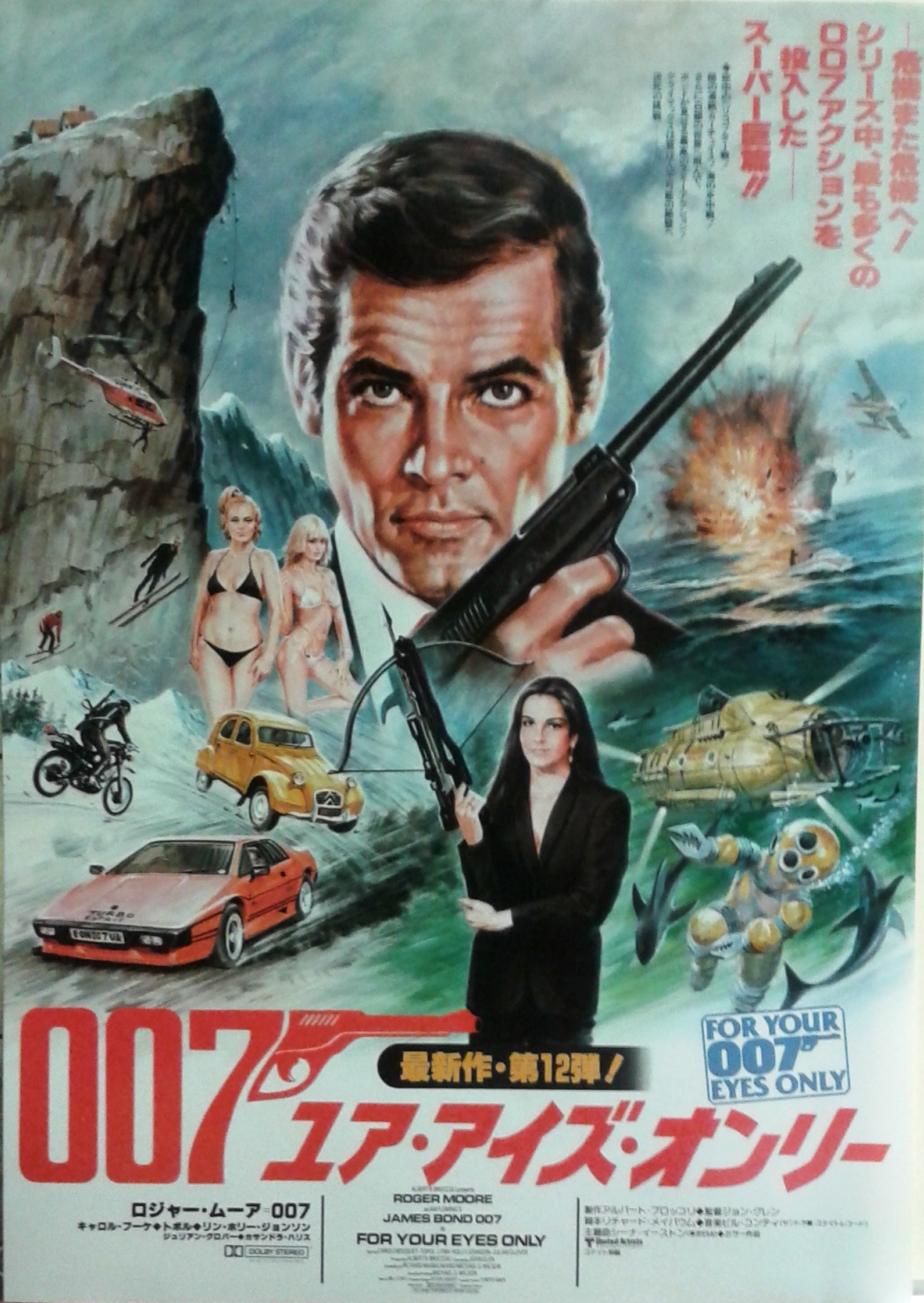 Japanese variant design by Noguchi. British film flier. FOR YOUR EYES ONLY (1981), directed by John Glen

Here is another interesting story about one Japanese artist and his work, who was supported by an innovative film company, caught the eye of one French filmmaker. The subsequent series of artwork was eventually highly received internationally.

Hisamitsu Noguchi (1909-1994), a graphic designer as well as a famous jazz and musical critic, was one of the notable cinema poster designers for pre- and post-war films in Japan.

Noguchi was originally a true film aficionado, and he belonged to a cinema club after joining the Tokyo School of Fine Arts (currently Tokyo University of the Arts). While he initiated lots of projects, including independent film productions, his interest in European films led him to design film posters rather than film production itself. The color, composition and typography of posters for European films, especially elegant designs by Soviet Union and German creators, genuinely influenced his esthetic and artistic sensibility, including those for Sergei Eisenstein’s Old and New/Старое и новое/Staroye i novoye (1929) and Aleksandr Dovzhenko‘s Earth/Земля/Zemlya (1930). Thus, Noguchi chose to design original posters for his graduation project. The project, consisting of seven posters, including Germany’s 1931 film Mädchen in Uniform/Girls in Uniform, was sublime in quality, and all the posters were purchased by the art school (Nemoto, 2011). 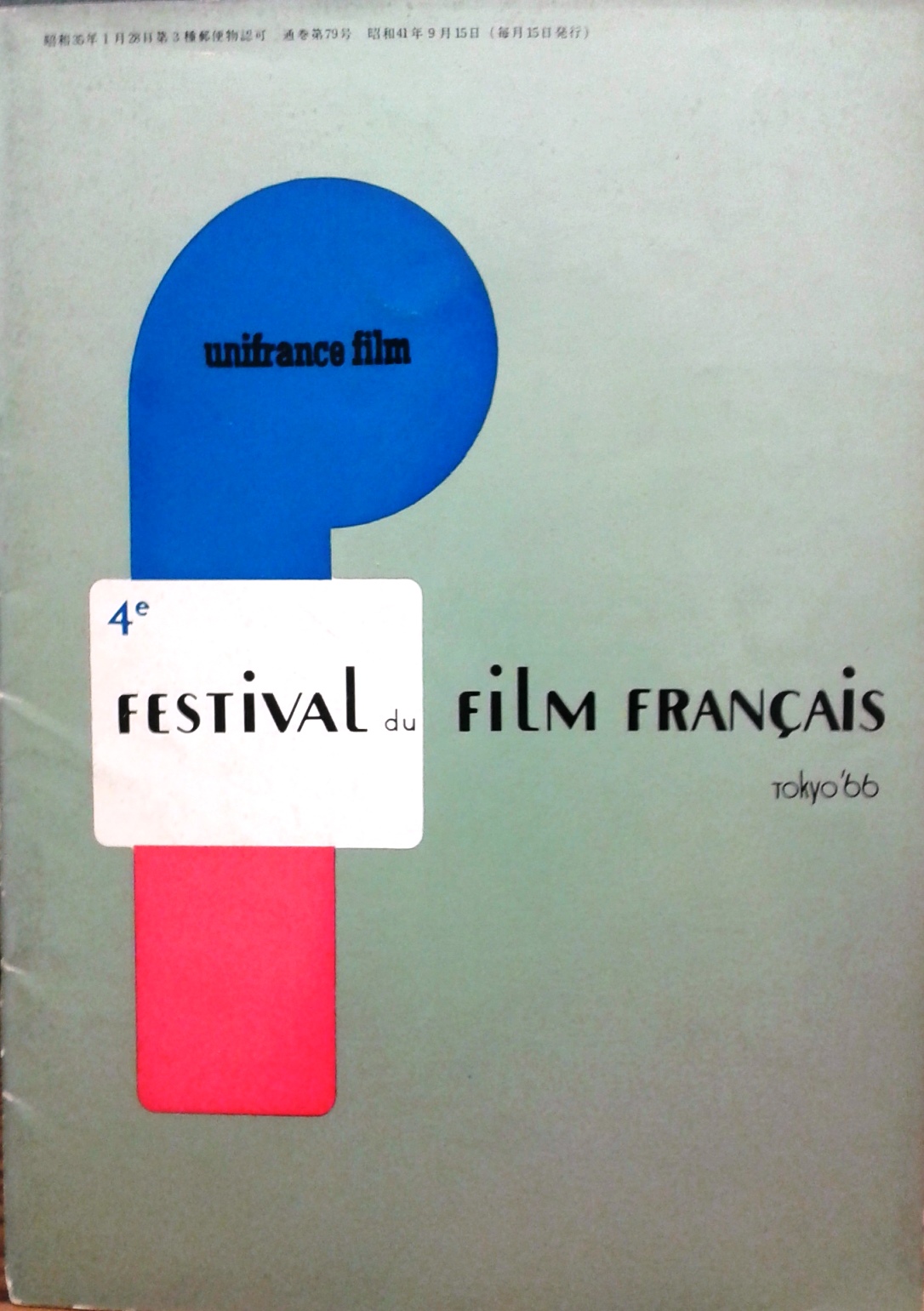 Designed by Noguchi. A program of French Film Festival in Tokyo ’66

Noguchi had long been wanting to join a film company as a creator, particularly Tōwa. Tōwa, the pioneer of European film distribution, was established by Nagamasa Kawakita (1903-1981), and it had long been Noguchi’s dream film company. In 1933, Noguchi had his dream come true; he finally joined Tōwa, after frequent visits to the company with his portfolio of original film posters. Soon after, this young man, who was just a big film fan, made it all the way to the top of cinema culture.

Following the influx of American blockbuster films, many European films were also imported after trade regulations were relaxed. Following these dramatic changes in film culture, Noguchi sought new means of expression within film posters, as design was no longer limited by firm conventions and directions regarding promotional materials. While Tōwa brought quality films in cutting-edge line-ups to audiences as works of art, and generated a movement of French cinema in Japan, Noguchi revolutionized film posters with his new style of expression, and elevated film ephemera to the realm of cinema art. 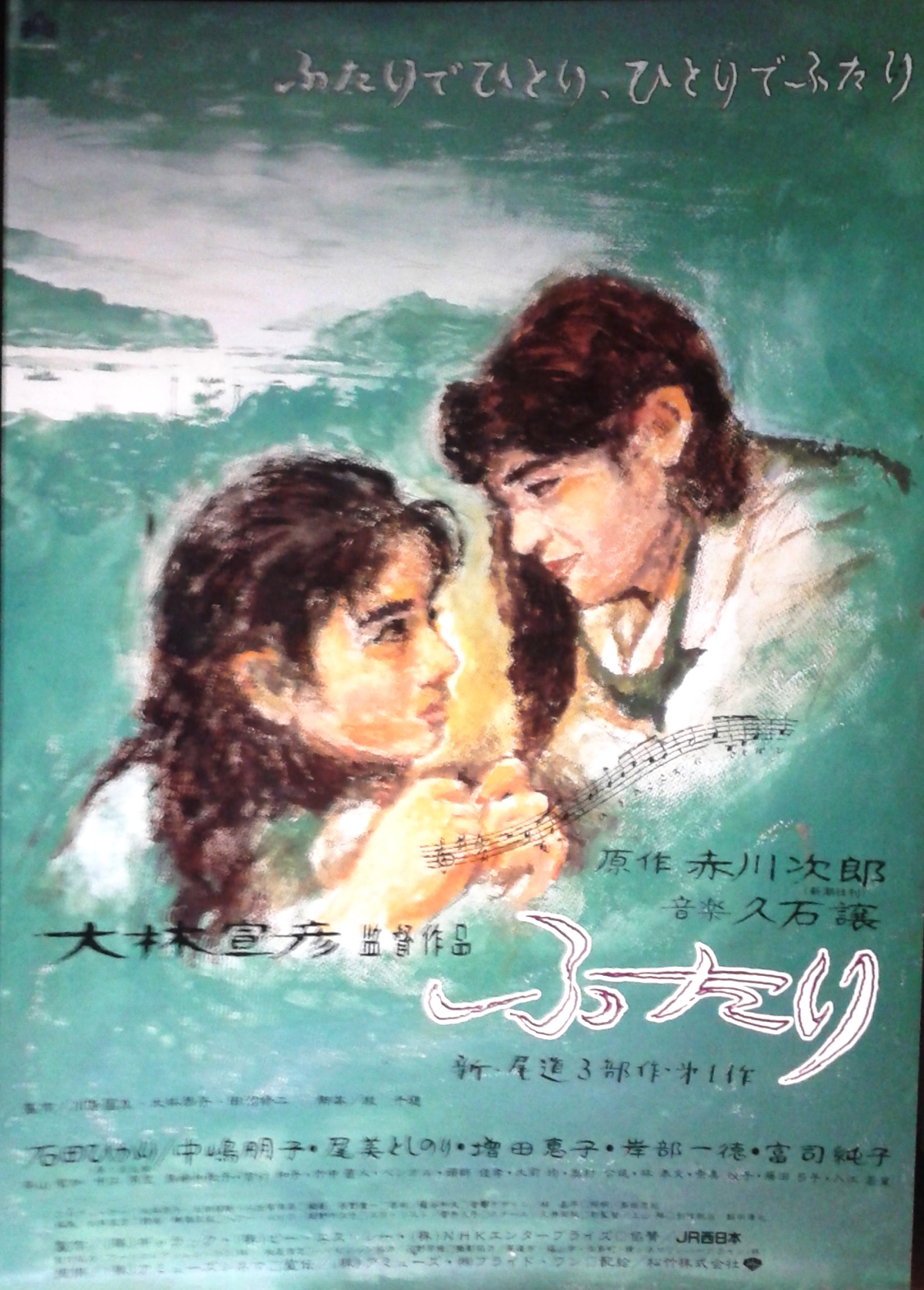 A great collaboration within Tōwa should also be mentioned. A film promoter named Tsuneo Hazumi (1908-1958), who worked together with Noguchi, played a significant role in producing innovative film posters. Most of the impressive slogans in Noguchi’s posters were created by Hazumi. Hazumi had a unique and insightful sense for quality film promotion, and his slogans for European masterpieces added a lovely essence to Noguchi’s posters.

– And the moment we saw one of Noguchi’s cinema posters, it reminds us that the movie had already begun (Tadanori Yokoo, Graphic Designer, 1936-)

– The films that Mr. & Mrs. Kawakita strived to introduce were truly a treasure box of European cinemas. The artist Noguchi’s origination of those works as artful posters was tremendous (Yoshiko Yamaguchi, Actress, 1920-2014)

– Whether one appreciates Noguchi or not reveals the level of the one’s film connoisseurship (Danshi Tatekawa, Rakugo storyteller, 1936-2011)

Meanwhile, one poster deeply caught one filmmaker’s attention in France. The renowned filmmaker from the French New Wave François Truffaut loved Noguchi’s poster, Les Quatre Cents Coups/The 400 Blows (1959) that was created for the film’s Japan release in 1960. This fact is well-known to film fans both in France and Japan. Truffaut sent a letter of appreciation to Noguchi, when he visited Japan on the occasion of the French Cinema Festival in 1963. In response to it, Noguchi gifted him with the original drawing of the film poster. 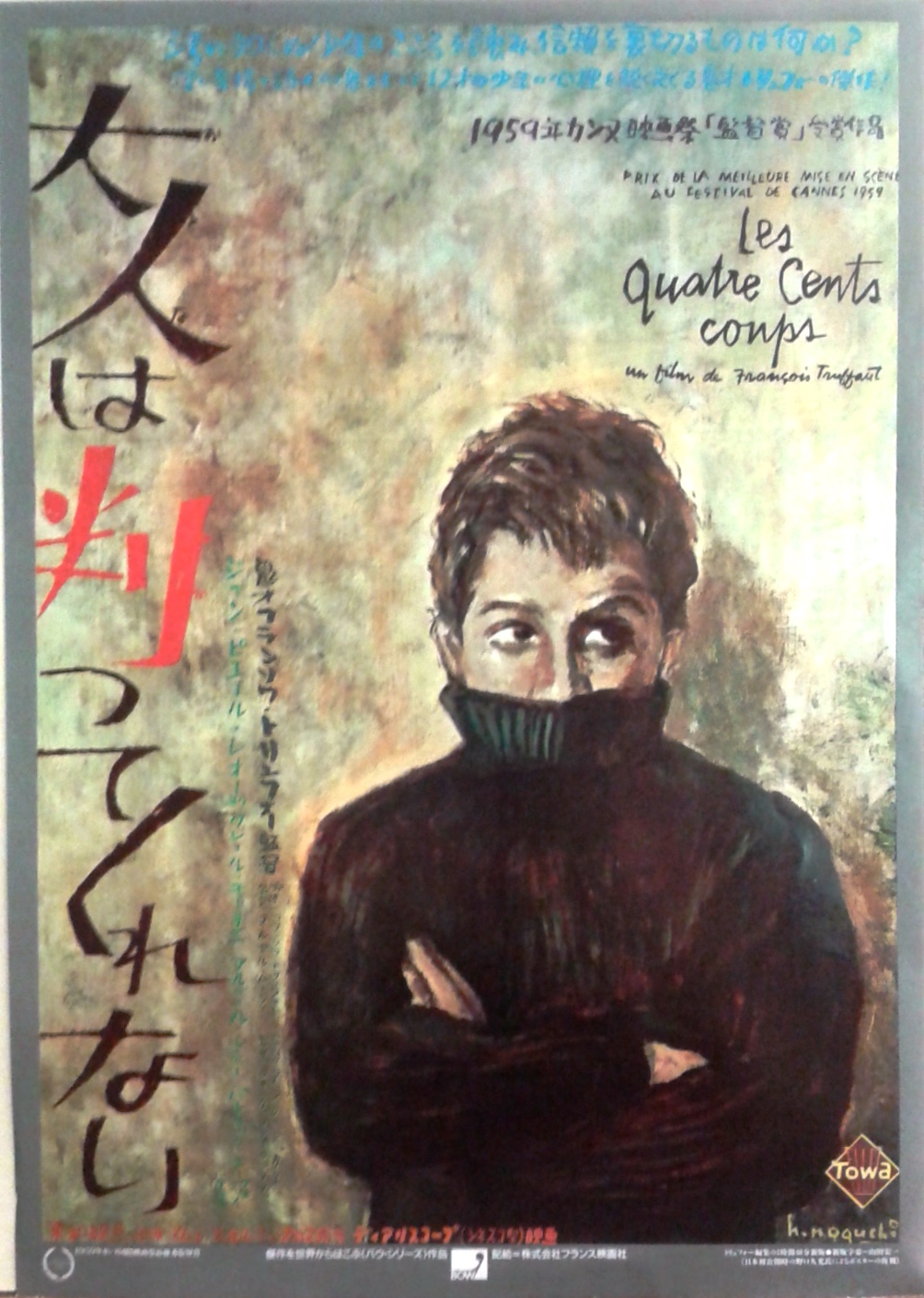 Truffaut’s love of the piece of Noguchi’s artwork extended to his film as well; Truffaut even used Noguchi’s original artwork as part of the decoration which was used in his films, including Love at Twenty/L’amour à vingt ans (1962/1963 in Japan). However, Noguchi gradually moved away from designing and shifted to being a jazz and music critic, leaving Truffaut’s wish unfulfilled as he aspired to have Noguchi’s work for a French poster of his new film.

Noguchi’s name and his artworks have been widely appreciated not only in Japan, but also especially in France. In 2014, one of the largest film archives in the world, La Cinémathèque française in Paris held an exhibition, Hisamitsu Noguchi: The Graphic Works. A number of his works have been housed at this film archives for permanent preservation, in the land of a foreign country. His powerful artworks not only went beyond the border of advertising, design, film, and art, but also represented cross-cultural borders.

Thus, some of the film poster creators successfully built up their own style within the small “film art” world, and have been very popular among cult collectors around the world. As mentioned, gorgeous artworks attracted not only film aficionados, but also film directors themselves. Japanese artists and their works have been and will continue to be adored by viewers due to the ample variant designs, quality, talented artists and unique creations.  A number of these masterpieces have been concentrated and preserved in the Makino’s ephemera collection.