The initial style of the film handbill, or flier, was seen in Japan before World War II. There were a limited number of movie theaters in Japan at this period, and films were promoted by theaters themselves. The pre-war handbills in the Makino Collection were printed on coarse paper and produced by the movie theaters, unlike the current Western style. The design uses traditional Japanese writing styles, such as inscribing phrases from right to left.

The original style of film programs began to be distributed as a free-of-charge weekly bulletin, which were published by film theaters just like film fliers. There was no boundary between flier and program at this point. 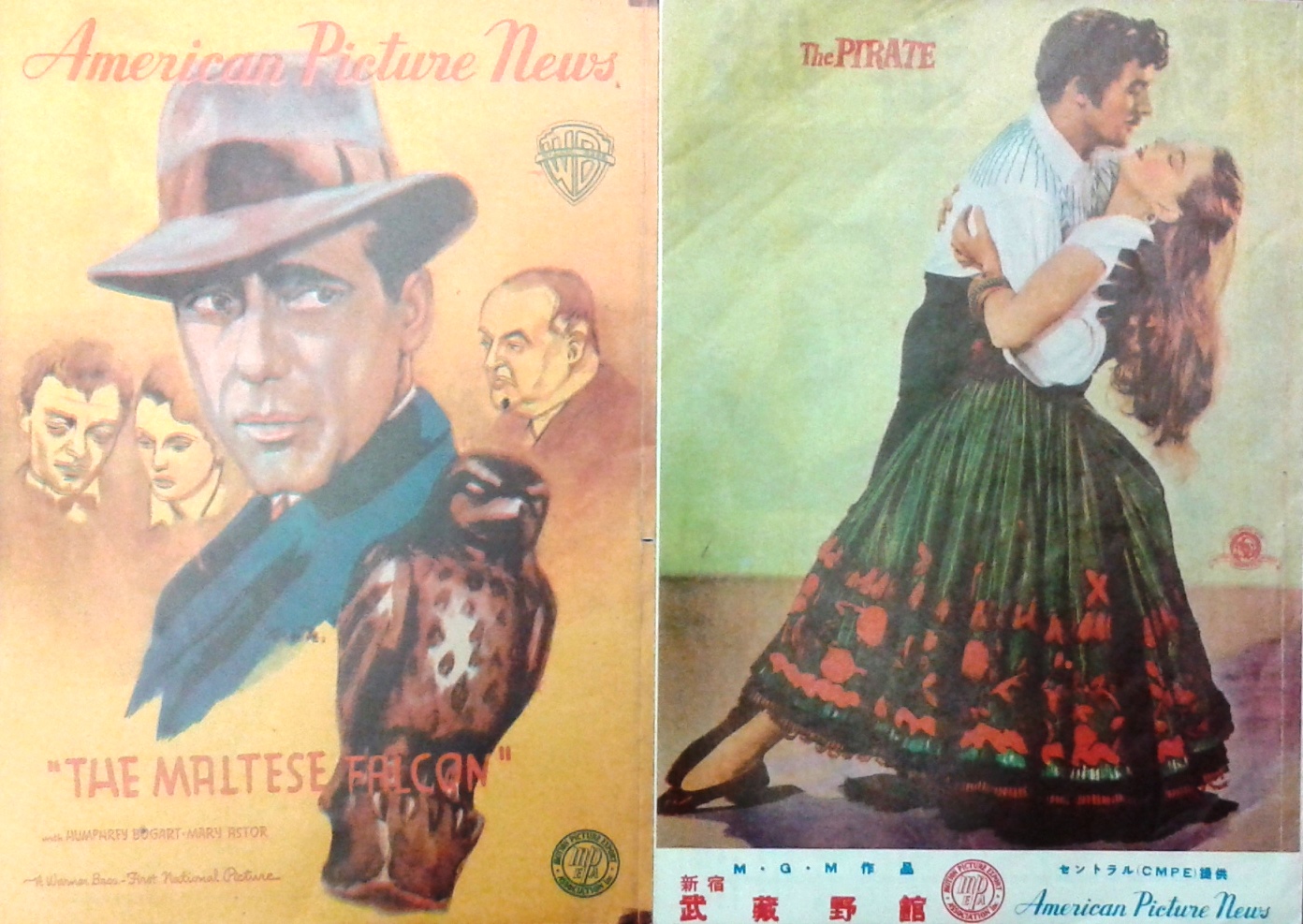 After the war, starting from Subaruza in the Yῡrakuchō neighborhood of Tokyo, the American style of roadshow theatrical release permeated all of Japan, which was led by the Central Motion Picture Exchange (CMPE). CMPE published and sold their own film programs for their distributed Hollywood films during the occupation period. Meanwhile, the number of theaters dramatically increased, reaching its peak in 1960.

* CLICK TO ENLARGE * Attendance at pre- and post-war film theaters, and the historical background in Japan. Source: Compiled by C. V. Starr East Asian Library, Columbia University in the City of New York, based on data from The Motion Picture Producers Association of Japan, Inc (2014); Senjika no Nihon eiga by Takahisa Furukawa (2003); the Cabinet Office, Government of Japan (2014)

END_OF_DOCUMENT_TOKEN_TO_BE_REPLACED

Playbill ephemera or what I refer to as handbills/programs/pamphlets/fliers (chirashi/チラシ) in the Makino Collection, are an interesting source for research on Japanese film.  They indicate what films were showing where and when, and may indicate cast and director/writer information. There is often a description of the film and advertisements. They enable scholars to find out what was popular at a certain time and location and the Makino Collection has a spectacular amount of these materials for both  the pre and postwar periods.

I recently added movie theater handbills/programs from China (including Manchuria) to the East Asian section of the Makino Collection (Series VII, box 609, 611, 634). These handbills from the 1940s are organized by city in Manchuria, with dates in Manchukuo calendar years (kōtoku/康徳), assuming that is what was written on the handbills. Cities include Hsinking/Xinjing/新京 (capital of Manchukuo), Dairen/Dalian/大連, and Tianjin/天津.  Some include tickets stubs which are kept with the handbill/program. Some have English, Japanese, and/or Chinese, and sometimes Russian text.  What do these ephemera have to contribute to our knowledge of the colonial period and Japanese Occupation?  Perhaps patrons of the Makino Collection will tell us in the future.

These handbills are a lovely addition to the more than 3,000 movie theater handbills from Japanese movie theaters that have already been processed in Series XII of the Collection (Boxes 124-139, 560, 612). The one below from Tokyo Eiga Gekijo has a ticket stub alongside it: 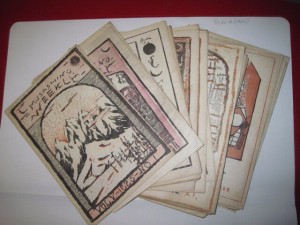 These are Musashino Weekly from 1925.

This set of handbills contains prewar fliers, pamphlets, programs, and weekly listings of film showings at movie theaters primarily during the prewar period. Also included with many of the programs are newspaper clippings or even ticket stubs for the particular film showings that appear in the programs. They are very well organized and we tried to include as much information as possible in the Excel file of holdings.  The first file contains early Meiji period handbills with some from the Taishō period (1920s) as organized by Mr. Makino. Files are then organized alphabetically by city, theater name, title (when known), and then number and date (This retains Mr. Makino’s organization by location and theater name). The majority of fliers are from theaters in Tokyo, more than 70 movie theaters in all. For these theaters, they are further organized alphabetically by location within the city of Tokyo: area of Tokyo, theater name, title, and then number and date. Some programs in this subseries are numbered and dated, while others are not numbered nor dated. The scope content/notes column includes the name of the film production company that managed the theater where known. In addition to the theater name, we have included the title of the publication, which means in some cases there are multiple folders per theater name.

Movie theater handbills can also be found in other parts of the Makino Collection. These include:
– handbills/programs distributed at multiple theaters and locations that were managed by the film production company Shōchiku.  They were were kept in 2 files by Mr. Makino (we have kept them together as well, also in Series XII).

– special film screening fliers/特別上映 and previews/試写会 (Series XII.14), which were kept in their original 2 file order.

– music fliers for films, and postwar fliers from the 1980s collected by Kobayashi Keizaburō/小林圭三郎 (kept in Series I.6: Director Files, Kobayashi).

– newspaper handbills for late 1930s films that are handbills but found with newspapers (Series XVIII: Newspapers)

In addition to the items processed thus far, there are 26 boxes of unprocessed postwar film programs that remain in the Collection. These complement the prewar movie theater handbills and offer a different perspective on film viewership in Japan.  Some of these may contain fliers acquired along with the movie theater programs, which in the postwar are programs that were purchased by patrons rather than freely distributed by the movie theaters, and are thus souvenirs.