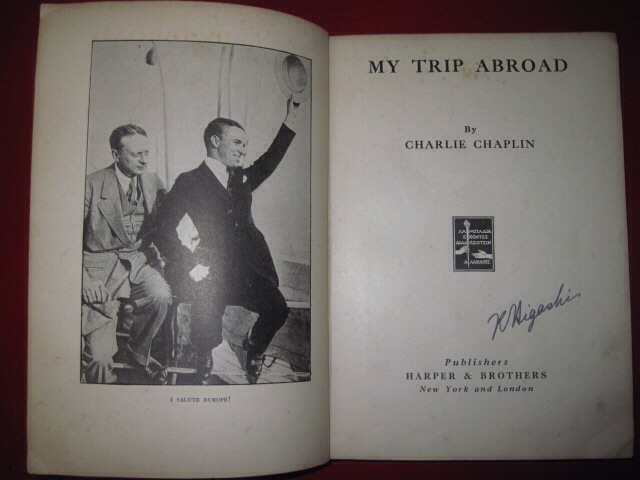 In addition to Japanese and East Asian materials in the Makino Collection, there are items related to Western film stars.  This includes materials related to Charlie Chaplin. Chaplin visited Japan four times in his life and was clearly a popular star there – as everywhere else in the world.  Chaplin was even in Japan in 1932 during the May 15th Incident when the Prime Minister was assassinated by young naval officers.  Chaplin happened to be with the Prime Minister’s son during the attack and was apparently a target of the original assassination plan.

Mr. Makino collected original editions of books by and about Chaplin including the one that Mr. Makino wrote was the inspiration for his Collection – My Trip Abroad (1922). Referring to this book, in "Chaplin Among the Ashes" (trans. by Joanne Bernardi), Makino writes that he had "no idea why I bought the book, or how I felt at the time.  Around that time I was absorbed in writing poetry. I often saw movies, but I doubt that I had an interest yet in buying books about film…. In my life with books ever since, I resigned myself to disposing of my library a number of times, but for some reason this one volume always ended up back on a corner of the bookshelf.  I realized that it was no ordinary book twenty years later, after I had entered the world of film production, and in due course began my research in film history."  (In Praise of Film Studies: Essays in Honor of Makino Mamoru. edited by Aaron Gerow and Abé Mark Nornes, Yokohama: Kinema Club, 2001, pp. 69-70).

Now this Chaplin book that inspired Mr. Makino in his youth, along with its translation into Japanese (1930), are in the Makino Collection at Columbia University!  See a photograph of the title page of the original 1922 book at the beginning of this post.

This book also spurred Mr. Makino’s interest in Chaplin’s long term Japanese assistant Kono Toraichi/高野虎市,who worked for Chaplin for more than 20 years, was eventually arrested by the U.S. government on suspicion of spying for Japan, was released, and then interned during the war. For an overview of Chaplin and Kono’s relationship in English, see Bruce Wallace, "Charlie Chaplin’s Japanese Connection," April 19, 2006. Ono Hiroyuki who is interviewed in Wallace’s article, wrote his own book on Kono and Chaplin, Chappurin no kage: Nihonjin hisho Kono Toraichi /チャップリンの影：日本人秘書高野虎市, Tokyo: Kodansha, 2009.  Mr. Makino also wrote about Kono in "Chaplin Among the Ashes" and gathered all sorts of materials about him.

The Collection materials include a karuta (card) game from the 1910s with images of Charlie Chaplin and Roscoe Conkling “Fatty” Arbuckle on it.  (Known endearingly as “Debu-chan” or "Fatty" in Japan – Arbuckle was another Western comedy star popular in Japan). There is also a Chaplin sugoroku poster game from 1922 (sugoroku is a kind of board game), a movie theater gift poster, programs and fliers for Chaplin films shown in Japan, several popular magazines special issues on Chaplin, bank, post office, and film study group fliers, a filmography, newspaper clippings, a still photograph of Chaplin with his one-time wife Paulette Goddard, items from a 1971 Chaplin film convention, as well as a scrapbook containing photocopied articles about Chaplin’s 1932 Japan visit, and 6 scrapbooks with articles from the 1930s and early 1940s about Kono. A portrait photo album once owned by the popular actress Kurishima Sumiko/栗島すみ子 has two photographs of Charlie Chaplin possibly taken during his 1932 visit as well. Sorry for the long list, but this is a really interesting assortment of items.