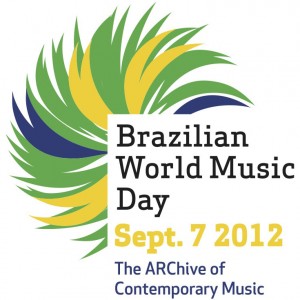 Resources on popular Brazilian music in all forms have been contributed by participants from around the world, to build what ARC describes as “a free, permanently available, online database of Brazilian recordings and their locations around the world.”

The site lists events and performances, as well, which are being held in association with Brazilian World Music Day, or feature Brazilian music.

Check out the website’s YouTube channel, for hours of Brazilian musical enjoyment!

There is an exhibition featuring the music of Brazil, including recordings, books, scores, and ephemera from our collections, on display in the main exhibition case of the Music & Arts Library (701 Dodge).  All of the featured recordings are available for listening in the Library. A research guide on Brazilian music prepared by library intern John Kroondyck, working with Latin American and Iberian Studies Librarian Sean Knowlton, is available at: http://library.columbia.edu/content/libraryweb/indiv/global/latam/guides/bwmd.html.

And, stay tuned! because WKCR will be featuring 12 hours of Brazilian music, to be broadcast on Friday, Sept. 7th, 2012, beginning at 1pm. The broadcast will feature several live performances on-air.

Also in conjunction with the event, Prof. Aaron Fox, from Columbia’s Music Department, will join other participants at a symposium on “Whose Music Is It, Anyway?: The Politics of Property and Archives in Brazil, the Americas, and at Columbia“.   It will be held at the Casa Hispanica on Sept. 28, 3-5pm

Put a little samba in your step with Brazilian World Music Day!