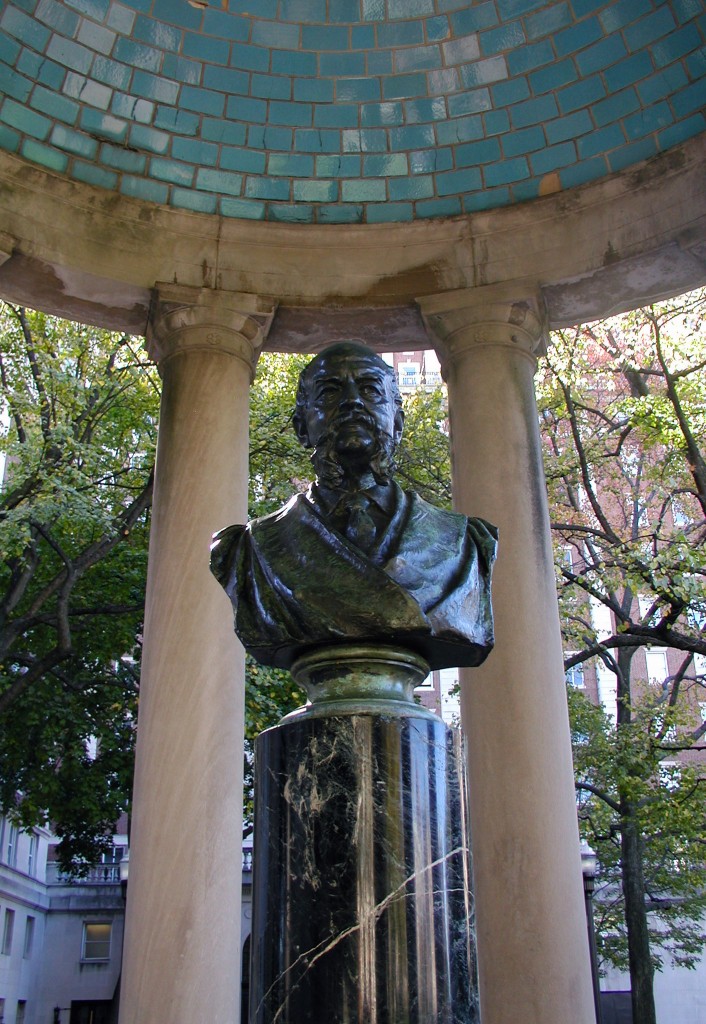 The face of John Howard Van Amringe (1835-1915), with his fashionable low-hanging whiskers, is one of the most recognizable in Columbia’s visual history. Van Amringe graduated from Columbia College in 1860 and began teaching courses in mathematics that same year. Fifty years later in 1910, he retired as the much-esteemed Dean of Columbia College and Chair of the Mathematics Dept. He was soon commemorated with a series of portrait busts by alumnus sculptor William Ordway Partridge (1861-1930). Two replicas of this bust were commissioned in bronze in 1912 and 1913 and were installed respectively in Hamilton Hall and the Columbia Club. A third, cast in 1922, was destined for the eponymous tempietto-styled pavilion that still exists outside Hartley and Wallach (formerly Livingston) Halls.

The Columbia Spectator reported on September 27, 1917, that work on the Van Amringe Memorial was underway and expected to be completed the following month. They described its design as “a circular structure containing a bust of Dean Van Amringe . . . . The quadrangle bounded by the double row of linden trees will be planted with shrubbery and evergreens to set off the monument to the best advantage.” The approved plan for the structure was described as “a stone building of classic design, consisting of a raised platform which will be a base for ten columns surmounted by a dome. It will be twenty-three feet in diameter and twenty-five feet in height.” (p. 4)

Subsequent articles reported on the need for further funding to complete the project, and the memorial was completed over the next few years. Finally, in June 1922 on Commencement Day, the third bronze bust by Partridge was installed on a marble pedestal designed by the architects McKim, Mead, and White. Inscribed on the ground around the pedestal was the following: “JOHN HOWARD VAN AMRINGE, 1835–1915 / OF THE CLASS OF 1860 / DEAN OF COLUMBIA MANY A DAY. / THE LIGHT HE LEAVES BEHIND HIM / LIES UPON THE PATHS OF MEN.”

On June 8, 1962, vandals reportedly toppled the bust off the pedestal and caused extensive damage. The bust was either repaired or replaced, and reinstalled in December of that year. In Fall 1987 the memorial underwent conservation efforts to refurbish the pavilion structure. Built to commemorate one of Columbia’s most important administrators, the Van Amringe Memorial and Quadrangle remains today one of the most popular areas for outdoor study and socializing on the grounds of the Morningside campus.

To read the Columbia Spectator in digital format, consult the Columbia University Libraries’ Digital Collections, or go to http://spectatorarchive.library.columbia.edu/.

Here are a few new photos of the some of the public outdoor sculptures on the Morningside campus, taken by Art Properties student assistant Michael J. Munro (GSAPP, Historic Preservation). If you want to send us your photos and possibly see them on the blog, email us at artproperties@library.columbia.edu. 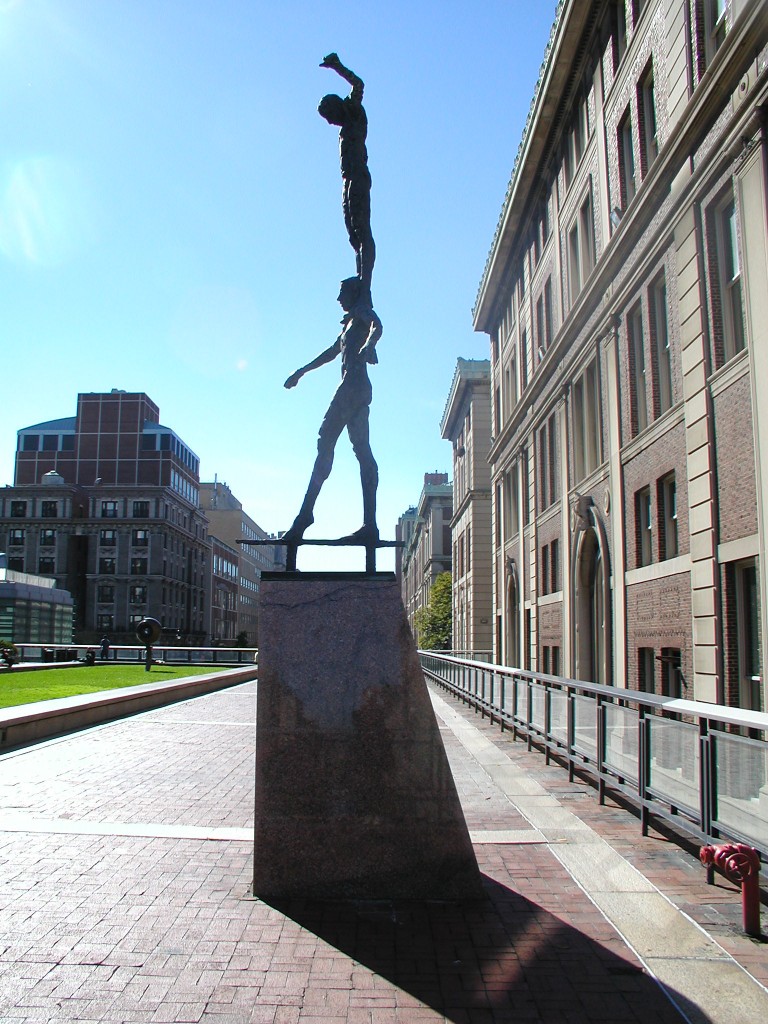 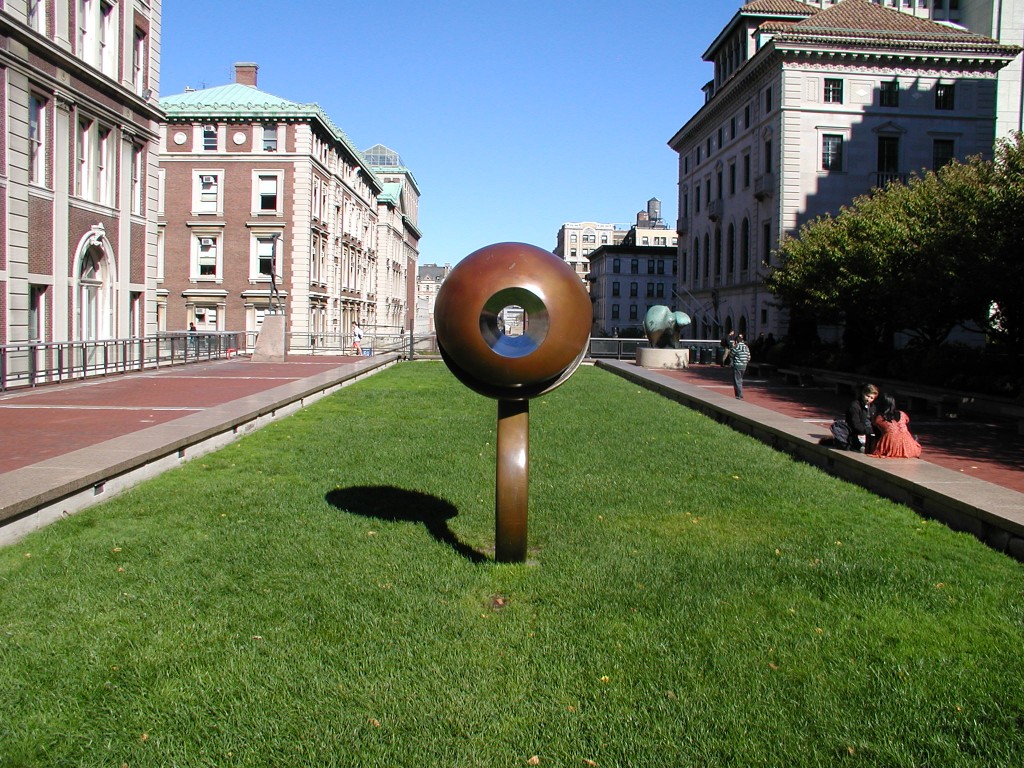 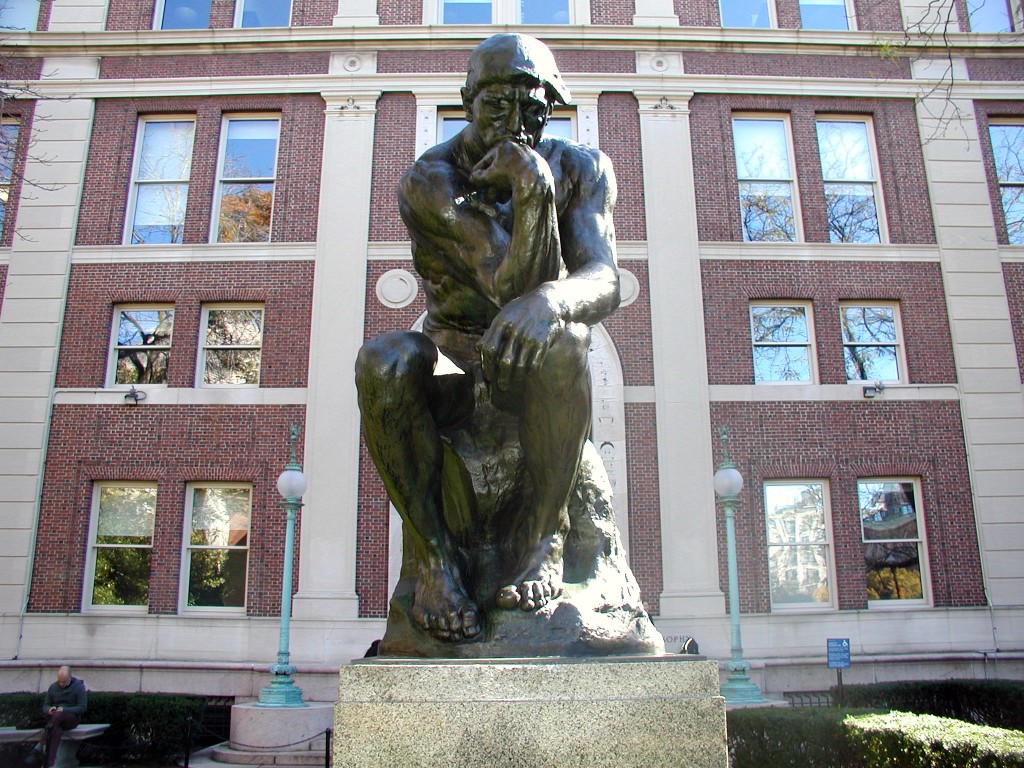 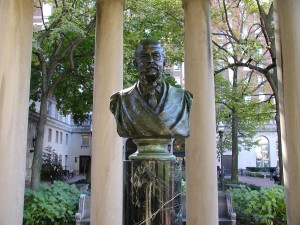