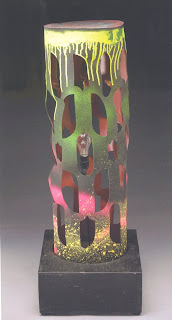 RBML collects more than just books and manuscripts; we also have a lot of what librarians call realia—real life objects. Pictured here is our Dream Machine, which comes from William S. Burroughs, via his collaborator & one time assistant Steven Lowe.

The Dream Machine is a simple device: a slotted cardboard cylinder is mounted on an old phonographic turntable, and sits like a lampshade over a lightbulb. Power it up and the spinning cylinder creates a flickering light that oscillates at a rhythm corresponding to alpha waves in the brain, thus creating a psychedelic effect for the observer.1

Brion Gysin & Ian Sommerville, two of WSB’s artistic collaborators, are credited as the Dream Machine’s creators. Ted Morgan, author of Literary Outlaw: Life and Times of William S Burroughs, writes that WSB “thought the Dream Machine was terrific, and had strange visions peering at it.”

As many Burroughs readers and scholars know, RBML is home to several significant Burroughs manuscripts—the Junkie typescript is here and so is the “Interzone” typescript, which WSB scholar Oliver Harris calls the largest and most significant Naked Lunch manuscript extant. In Fall 2009 our Dream Machine will exhibited alongside these manuscripts for the fiftieth anniversary of Naked Lunch. Stay tuned for details…

1 In the name of scholarship, one of our curators tested both the mechanical and visual integrity of this device, and we can report that sitting in front of a spinning Dream Machine, even with eyes closed, produced colorful flashes of dizzying effect.