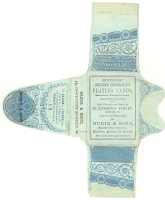 A discussion of early dust wrappers on books on the SHARP discussion list took a side turn when wrappers on playing cards came up as a possibly parallel phenomenon. The recently-publicized Field collection of playing cards — over 6,000 decks and a good bit of related material — has a number of these wrappers.
In England, the wrappers were apparently required from the 18th well into the 20th centuries as carriers for duty stamps (in fact, they were supposed to be destroyed when one opened the pack, to prevent re-use). Nevertheless, Mr. Field collected dozens of English examples alone.
I was taken with the example above, both because I hadn’t thought of Mudies’ (famous as a major circulating library) as a stationer, though it’s perfectly sensible combination in the nineteenth century, but more particularly because I find the concept of selling “Genuine Second-Hand” used playing cards at odds with my memory of my English grandparents.