For an archivist, everyday is a potential journey to the center of the earth. Open a box—any box—and you are instantly transported to another place and time. In most cases the creator of those records did not intend for this to be the case. But every now and then you stumble across a voice from the past who intended for you to hear it.

Such was the case in 2008 when I received a call from the Office of the Treasurer. The office was in the midst of a move when an envelope was found in the vault. “Do not open until October 31, A.D. 2000.” As with ancient curses of all sorts, the staff called the University Archives. “It’s some kind of time capsule. We were kind of afraid to open it.” 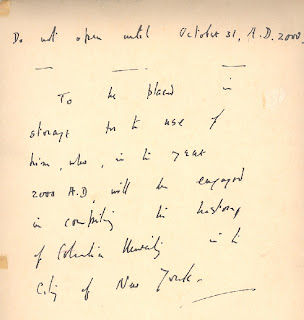 The package, I learned, was a 40 page observation on Columbia and its history sealed by one Roger Howson who, in 1948, was the University Librarian. Born in Overton, North Wales, and educated at Trinity College, Cambridge, Howson came to Columbia in 1922 as assistant librarian. In 1926 he was named University Librarian and by the time he retired in 1948, Columbia was the third largest university library in the country with well over 1,450,000 volumes. He had witnessed plenty and had more than a few words to say about Columbia’s history.

In his treatise, Howson recalls with good humor college spirit and student hi-jinx. Of sports he noted Columbia’s less-than-stellar reputation on the football field describing the school as the “graveyard of football coaches.” He wrote of the expense of the city, how New York “was generally more expensive than had been anticipated” for graduate students. Well, some things don’t change in sixty years.

Howson was critical toward discrimination against Jews, Irish Catholics, Armenians, and “coloreds.” Yet his most critical words were saved for Nicholas Murray Butler, president of Columbia from 1902-1945. “He was an intellectually illiterate man,” wrote Howson. “For him words were things out of which one made sentences, out of sentences one made speeches, and out of one’s speeches one compiled a career and a life.” Indeed, Howson asserted that the last thirty years of Butler’s administration was “one of the tragedies of American educational history.”

Roger Howson was, as Robert McCaughey described in his book Stand, Columbia, one of the least recognized historians of Columbia University history. His desire to capture the essence of time and place was deeply held and was, indeed, issued as a polite challenge in the closing paragraph of his letter to me, the University Archivist. “If I may make a suggestion it would be that you should follow my example and leave something similar for him who will follow you after fifty more years shall have passed.”