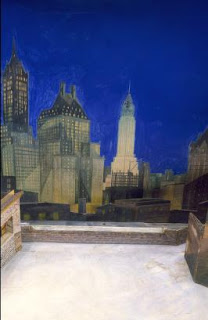 In an article in Sunday’s New York Times about David Rockwell’s designs for this year’s Oscar awards ceremony at the Kodak Theater (“The Little Gold Man In a New Blue World,” February 15, 2009), Patricia Leigh Brown writes: “This year the dominant color scheme will shift from red to a rich, deep blue, a shade inspired by Joseph Urban, the prolific stage designer of opera and the Ziegfeld Follies.”

The Urban blue! The most wonderful of all shades of blue, presented to the millions watching the Oscar ceremonies this Sunday! We thought it appropriate to present here one of Urban’s loveliest uses of his blue, as found in one of the set models held in the outstanding Joseph Urban archive in the Rare Book and Manuscript Library, Columbia University, namely for the musical “Flying High” that opened at the Apollo Theater on March 3, 1930.

As Arnold Aronson wrote in his Wallach Gallery, Columbia University, exhibit catalog “Architect of Dreams: The Theatrical Vision of Joseph Urban,”
“Joseph Urban, first and foremost, was a colorist. All of his innovations – on the stage, in architecture, and in decoration – can be tied to his unprecedented use of color, which was virtually unmatched in the twentieth century…Indeed a deep, rich, shimmering blue is his trademark…Only in the work of the Russian designers…for the Ballets Russes – at roughly the same time as Urban was creating his first stage designs – could one find such a brilliant use of color.” Stay tuned to this site for a future posting on the RBML’s forthcoming exhibit in honor of the centennial of Les Ballets Russes.