Inspired by my colleague’s post about bookplates, I thought I’d like to add a medieval example. Not that the Middle Ages produced bookplates, per se; the earliest one, ‘tis commonly said, is the angel holding a shield with an ox——the bookplate of Hilprand Brandenberg, who in 1505 donated his personal library of some 450 books to the Carthusian monastery of Buxheim in Germany. It is printed (if that’s a necessary component in the concept of “bookplate”), and it was applied to the front pastedown of books, and it did point to a specific owner. You can see a colored example of it at:
http://www.modernmicroscopy.com/article_pix/040420_bookplates/figure5.jpg

But the bookplate I’m talking about here would more usually be described as a historiated initial——an initial that contains a “story,” with human figures in it. No more suspense; here it is: 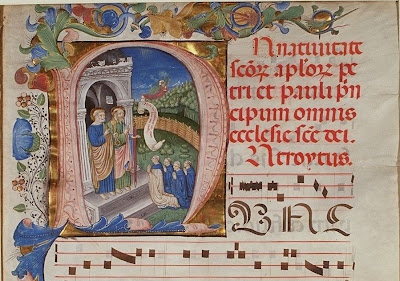 The initial is an N; two saints stand on a doorstep, admonishing a group of kneeling clerics, an angel flies above, the whole in a lovely verdant landscape. The N begins the mass for Sts. Peter and Paul, “Nunc scio vere …,” “Now I truly know ….” But all Columbia owns of what was once a very large choirbook is this single leaf, catalogued as Plimpton MS 040A. Where was it made? For whom was it made? Squawking birds’ heads (there are three in the foliage across the top margin) point to the Veneto; “broccoli” trees in the landscape suggest Lombardy. And the brilliant blue of the clerics’ robes can only mean one religious order: the Canons Regular of S. Giorgio in Alga whose nickname was “Azzurrini” for obvious reasons. Put it all together! The house of the Azzurrini in Brescia, in territory now Venetian and now Lombard, was dedicated to Sts. Peter and Paul. Is this historiated initial a bookplate or what?

There’s more. On the edge of one of the steps is a profile face of a man; he looks to me like a real man, as if this is a real portrait. I fondly imagine this man to be the artist who has “signed” his “bookplate.”