Today’s climactic moment as an RBML intern arrives at that time in the day when your fingers are beginning to tingle from the constant re-foldering and you start to question whether or not the demise of your career as an archivist will be the result of your enduring curiosity.  As my fits of laughter interrupt the silence resonating in the basement of the Lehman Library, I can’t help but share the contents of an impassioned fan letter addressed to Mr. Walter Farley, author of The Black Stallion series. I’d been waiting for this moment after spending the past two months assembling some order to approximately 22 boxes of Farley’s personal papers (only 22 or more to go) and now I am perhaps discovering more about the man’s shortcomings from his readers than from what I find to be often queer but informatively creative stories involving so far not only a Great Stallion, but also a Great Dane, and now a Girl.  Farley’s series has and continues to attract readers of all ages.

However, stumbling upon this particular correspondence between Farley and a devoted fan, who describes herself as, “ . . . a girl, a 13 year old girl in love with horses” deserves a second, third, and even fourth reading. Writing in a voice reminiscent of a youthful Cleopatra ready to wage war, the writer confronts and demands revision if not at least reconciliation regarding Farley’s decisions for the actions of his main character, Alec, (Farley’s leading man) who appears in nearly every book.

The Black Stallion and the Girl, one of his later stories published in 1971 received more attention than his previous works, according to my knowledge from his archive. For some, the book was considered sexist, for others, not sexist enough as was in the case of the letter you are about to read. 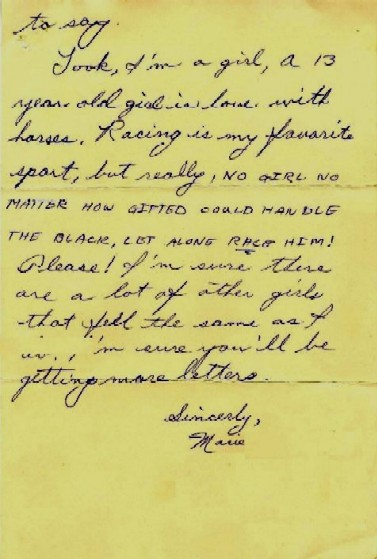 This fan letter prompted Farley to write a semi-curt reply, defending his book and encouraging the haughty youth to relax and reread the content due to her lack of fully understanding the context.

His reaction leads the girl to feeling remorse (unfortunately) which leads to her confession – the truth behind her angry words was her imagination and her desire for young love with ALEC, thus her impulsive jealousy of The Girl, Pam who gets to be with Alec prompted her war bent pen to the point of raising hell!

As a newbie archivist opening box after box of unsolved mysteries and untold stories, I will never know anything more about this reader or the influence Farley’s books may have had on her life, but I am certain the three of us in Lehman that day, including Chris, Carrie, and myself strongly identified with the spirit of the 13 year-old girl in love with a fictional character, sharpening her sword, wishing she was the one Alec loved, wishing she was The Girl.

C’mon, haven’t we all experienced or imagined we experienced unrequited love with a fictional character(s) or a living/dead author(s)? I know I have plenty of confessions . . .