In processing the records for the Committee to Protect Journalists (CPJ), I’ve found many files that document the challenges for journalists covering the war in the former Yugoslavia in the 1990s. For example, records relating to a project to create a safety handbook for these journalists provide additional insights into the dangerous conditions surrounding their work.

Founded in 1981, the CPJ works to promote press freedom and to defend the rights of journalists to cover and report the news around the world. The war in the former Yugoslavia inspired the CPJ to explore new ways to assist journalists.  In this case, the CPJ began a project to publish an advisory guide for journalists covering events there. CPJ had never issued such a guide, but felt that the unprecedented casualty rate for journalists covering the war created a need for reliable advice and safety information. The CPJ felt that its role as a monitor of press conditions put it in a unique position to fill this void by gathering such information and providing it to journalists.

As I continued processing, however, I discovered that the records included not only the guides, but also the correspondence and interview notes of CPJ Publications Director Greg Victor. Victor interviewed many journalists about their experiences in the former Yugoslavia, including Al Horne of the Washington Post, Jim Dutton of ITN, and several journalists at CNN. Notes below from an interview with Carol Williams and Al Horne illustrate  the working conditions 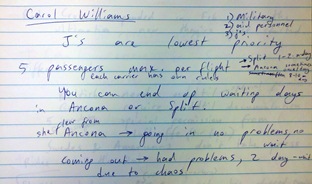 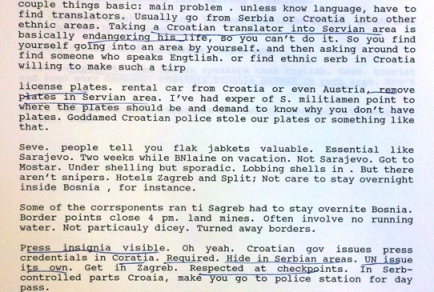 The guide went through at least four editions. I found the first edition, “Journalists Advisory on the Former Yugoslavia: How to Survive and Still Get the Story”, issued in November 1992, and an update, issued less than six months later in March 1993. These first editions were produced and printed on simple paper stock. Another edition, “Journalists Survival Guide: The Former Yugoslavia”, was reformatted and published in November 1994.

Made to fit easily into a pocket or case, these guides were widely used by journalists at the time. One additional edition was produced in 1999 by students in former CPJ Executive Director Anne Nelson’s Elements of International Reporting Class at Columbia University’s Graduate School of Journalism.

This project, in the end, did not remain an isolated idea. The idea of providing basic safety advice to journalists covering conflicts still remains important at CPJ, and the CPJ still produces a guide, entitled, “On Assignment: Covering Conflicts Safely”, which is available on the CPJ website.