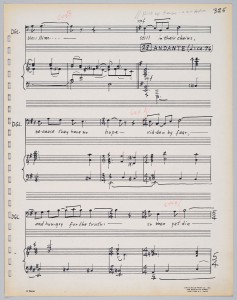 It also featured a performance by internationally-renowned bass-baritone Kevin Maynor, accompanied by Tuffus Zimbabwe.  Maynor joins the conversation at 41:50 and shortly thereafter sings the aria “Still In Their Chains” from Ulysses Kay’s opera “Frederick Douglass”.  Maynor had premiered the title role in the New Jersey Opera production of Kay’s last opera in 1991.

The Rare Book and Manuscript Library is home to the papers of Ulysses Kay, including the manuscript full score of “Frederick Douglass”.  A full Ulysses Kay web exhibition is forthcoming in the Library’s web exhibitions program.  Announcements about its launch will be posted here.