I’m currently working on processing the Dan Talbot Papers at the Rare Book & Manuscript Library at Columbia University. The Dan Talbot Papers were acquired by RBML in April 2009. Dan Talbot was the founder of New Yorker Films and a key figure in Art House and Independent cinema.  As described in the initial Columbia University press release, “The collection is composed of correspondence files that span more than 30 years, more than two decades of producer reports, contract files, files related to New Yorker Films, financial records, guest books dating back to 1960 and production related ephemera.”

It’s the guest books section of the collection that I’ve chosen to focus on first. These guest books are from Talbot’s New Yorker Theater which was operational from 1960 to 1973. The New Yorker Theater was an art house cinema that screened classic and foreign films, as well as Independent and avant-garde films of the day. The theater was the first of its kind to hit New York City and provided an outlet for many up and coming filmmakers such as Woody Allen and Martin Scorsese as well as notable film critics such as Susan Sontag and Andrew Sarris. Talbot established the use of guest books in his cinema so that patrons could state what they’d be interested in seeing.

The guest books yielded a variety of responses — from a few overzealous viewers who decided to draw guitars as their way of saying they’d like to see the Nicholas Ray film Johnny Guitar, to the cinephiles who take up an entire page with a few films titles because they were just that passionate. 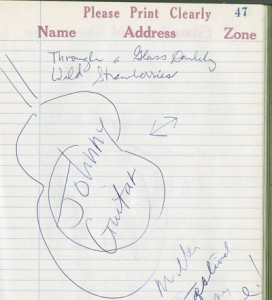 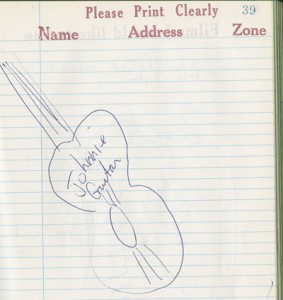 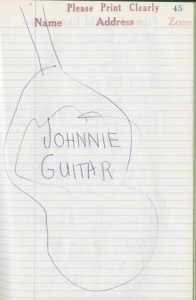 Some patrons didn’t leave their names; others did. A few notable individuals who attended the theater and suggested what they’d like to see were none other than Gene Wilder and Martin Scorsese. 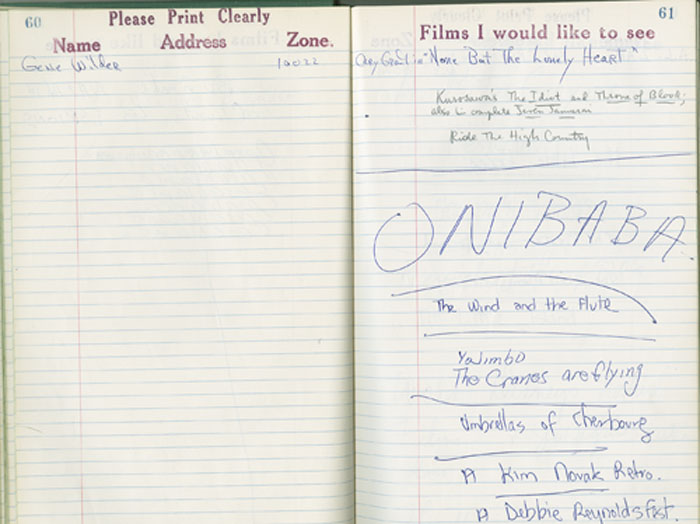 There is also an entry written by Gloria Swanson, and if it really was the classic actress then narcissism was rearing its head as her chosen film was — wait for it — Sunset Boulevard. 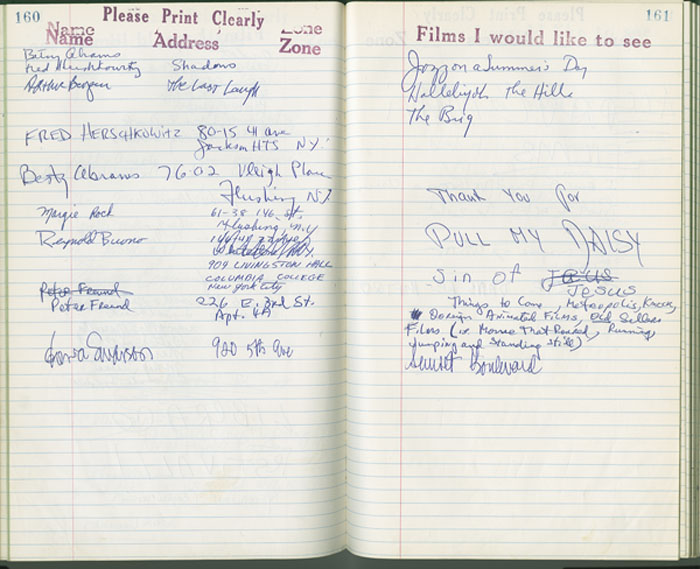 While it’s likely this amusing entry, complete with an address, was Swanson, there were quite a few patrons who did enjoy pretending to be people they were not. A few imposters spotted amongst the guest books included Groucho Marx, Judy Garland and Orson Welles.

The idea of guest books at a theater seems completely foreign to me today. We go to the movies and see what is offered because the majority of the movie-going public attends mainstream movie houses. Talbot utilized the guest book as a way of sussing out what his audience was really interested in and attempting to obtain those films because his goal was to bring Art House cinema to the foreground.  However, it was not always easy. Talbot’s own difficulty at obtaining foreign titles to screen at his theater was the catalyst that lead him to found New Yorker Films in the first place, in 1965.

The New Yorker Theater is no longer around and what we have left is several dozen guest books encapsulating a period of time that had New Yorkers excited and hungry for art and culture. Art House theaters do still exist, especially in the city. A notable one is the Film Forum, which showcases a variety of classic and foreign cinema and very often has retrospectives on certain genres or directors. Others include the Museum of Moving Image, the IFC Center, Landmark’s Sunshine Theaters and the Angelika Film Center.

Each of these theaters screens a variety of classic and foreign film selections in addition to current independent cinema. Talbot and his wife now run Lincoln Plaza Cinemas. It’s a small theater and very close to the Lincoln Center Loews, yet offers a variety of films that are usually not shown there. When a film says it opens in limited release in New York and L.A., you can bet that Lincoln Plaza Cinemas is one of the theaters in New York to screen it.

Having been at Lincoln Plaza Cinemas myself I did not see any guest books in the lobby. However, it would be wonderful to see the return of this outreach tool in one of these establishments to give cinephiles a voice for what they’d like to see. Dan Talbot had the right idea in the 1960’s with his New Yorker Theater and it was that cinema is a collaborative art between filmmakers, film distributors, and its patrons.