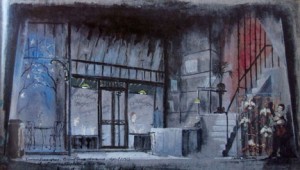 We are very fortunate that theatrical designer extraordinaire Peter Harvey has made a gift to RBML of his drawing for Tennessee Williams’s “Orpheus Descending,” produced at the Coconut Grove Playhouse in 1958. Tennessee was involved in the production and liked the set very much. Harvey graduated from the University of Miami, Coral Gables, in 1955. He was immediately hired as designer by the Coconut Grove Playhouse, a position that he held until the autumn of 1958 when he settled permanently in New York City with his partner, artist Peter Thek.

In New York, Peter Harvey created theatrical designs for George Balanchine and the New York City Ballet, including the spectacular “Jewels” of 1967 that he redesigned for the Company in 2004, and also recreated for the Marinsky in St. Petersburg, the Semperoper in Dresden and for La Scala Ballet in Milan. Other high-lights of his 30 years in the theater have been the full-length Balanchine ballet “A Midsummer Night’s Dream” for the Zurich Opera Ballet, the original New York and London productions of “The Boys in the Band,” and the hit musical “Dames at Sea.”