HarperCollins publishes Harper Lee’s novel Go Set a Watchman today, July 14, 2015.  With an initial print run of 2 million copies, this is the most highly anticipated book release of the year, carefully promoted by HarperCollins since their February 3rd announcement .

In The Washington Post, Neely Tucker questioned the timing of the decision to publish the novel sixty years after its composition and within months of the death of Nelle Lee’s protective older sister, Alice.  Alexandra Alter and Serge Kovaleski in The New York Times have pointed out discrepancies in the narrative about GSAW‘s composition and re-discovery given by HarperCollins and Lee’s current lawyer, Tonya Carter.  NPR books also reviews the debate about the novel’s genesis and the decision to publish.

The papers of Nelle Harper Lee’s literary agents, Annie Laurie Williams and Maurice Crain, held by the Columbia Rare Book & Manuscript Library, have factored in these debates.  The visitor cards kept by Williams track the submission of manuscripts by agency authors and provide a detailed timeline for the creation and eventual shelving of the manuscript for Go Set a Watchman. 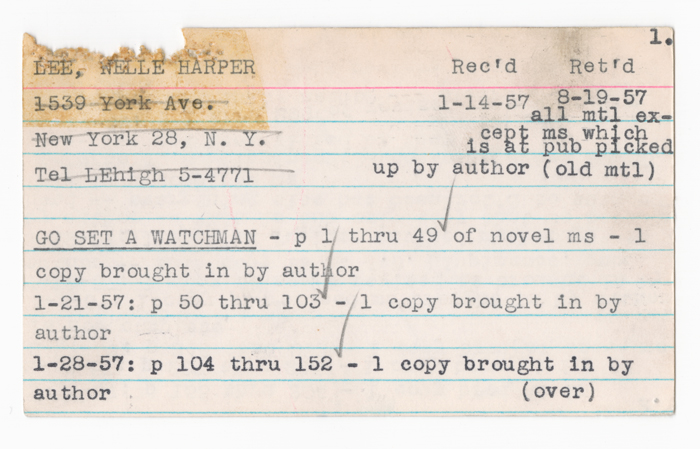 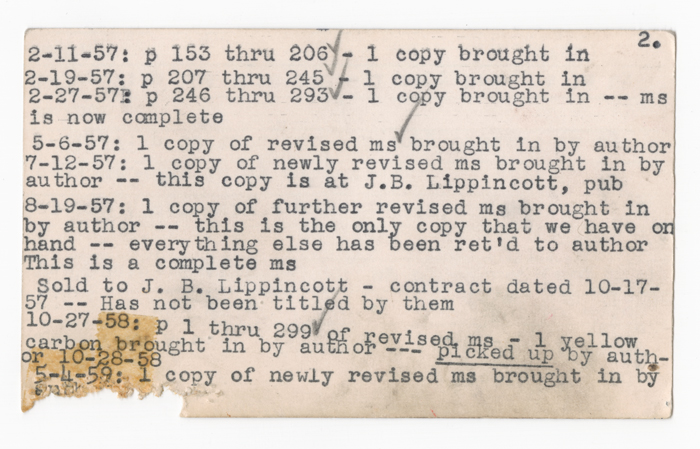 On the series of sequentially numbered cards above, one can see that starting on January 14, 1957, Harper Lee began delivering the pages of Go Set a Watchman at a steady pace of approximately fifty pages per week until it is noted as completed on February 27, 1957.  The manuscript then underwent editing, and by October 17, 1957, a fully edited manuscript was sold to J.B. Lippincott without a title, a fact corroborated by Maurice Crain’s facsimile of the contract in a contracts ledger, the first page of which is pictured below. 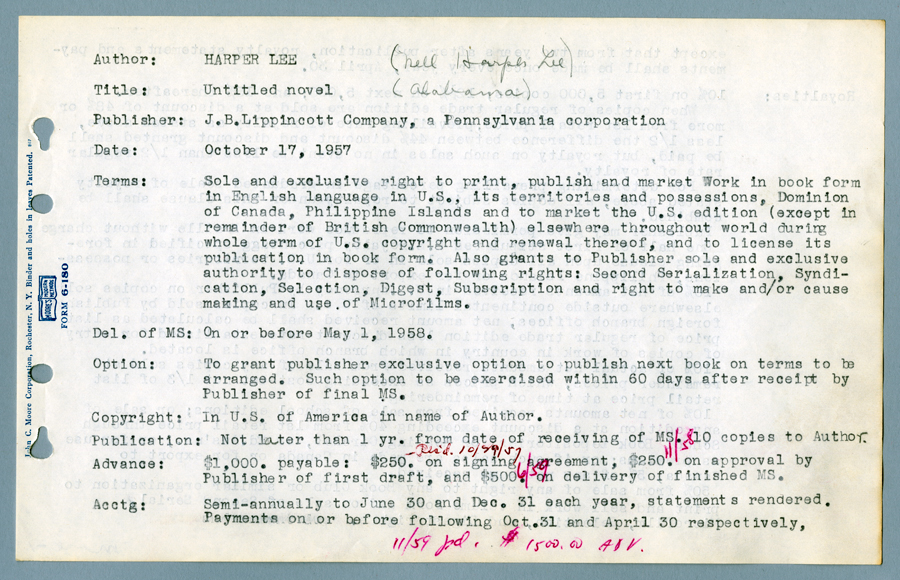 Lee then spent two years revising the novel. On the third of the sequential notecards pictured above (note the typed numbers in the upper-right corner of the notecards), a new title for the novel contracted by Lippincott emerges: To Kill a Mockingbird.  A separate card (below) from a file that Annie Laurie Williams kept for manuscripts also illustrates the change of title.  Filed under Lippincott, To Kill a Mockingbird appears above Go Set a Watchman, which has been crossed out. This emendation and the sequence of submissions noted in the visitor cards supports Nelle Lee’s comment that GSAW is the “parent” of TKAM, a novel set in Maycomb years after the plot of TKAM but drafted before. 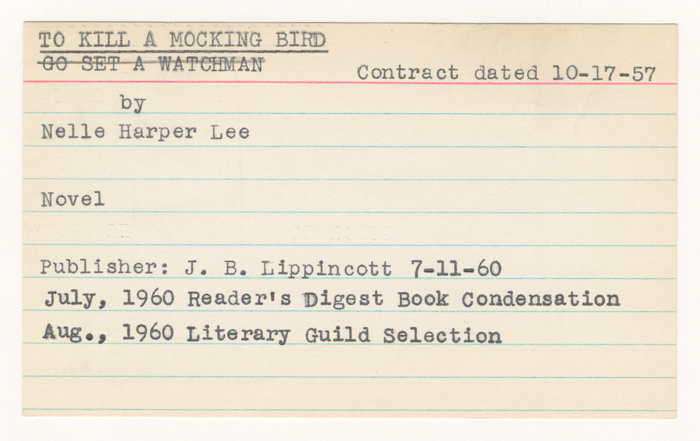 Annie Laurie Williams (1894-1977) was already a successful literary agent known for Hollywood successes such as Gone with the Wind (1939) by the time she and Maurice Crain teamed up as life and business partners. Together Williams and Crain handled the work of literary greats such as John Steinbeck and Nelle Harper Lee.  Williams donated her and Crain’s papers to Columbia University in 1971.

Nelle Lee first contacted the agents in 1956. The earliest visitor cards in the collection note that Lee first submitted short stories to her agents and that they first received her as a friend of Truman Capote. The papers of Williams and Crain show that they developed a close friendship with Lee, whom they often invited to join them at their weekend home in Connecticut. But documentation concerning Lee’s writing and revision process is scant, perhaps because so much of the discussion was conducted in person.

A statement published in the WSJ yesterday by Tonja Carter, as well as Jonathan Mahler’s New York Times article focusing on Lee’s relationship to her editor at Lippincott, Tay Hohoff, suggests that there is more evidence to consider as this newly visible work changes the conversation about one of the country’s most beloved novelists. Initial reviews of Go Set a Watchman (by Michiku Kakutani in The New York Times and Mark Lawson in The Guardian) have raised questions about the diverging racial politics of the two novels, for example. Hopefully access to a second work by Harper Lee will bring more critical and scholarly attention to her writing as well.

This blog post and a small exhibit of these materials currently up in the Columbia Rare Book & Manuscript Library were put together by Tom McCutchon and Karla Nielsen.