A sportising and betting tradition started on Staten Island by a barkeep, March Madness bracketology is upon us!  RBML Records Manager Joanna Rios shares key moments in a timely University Archives exhibition.

The Columbia University Archives has on view a small exhibition marking the 50th anniversary of Columbia’s best men’s basketball team. In 1967-1968, Columbia won 23 of 28 games, the most victories in school history, and finished the season ranked sixth in the nation. 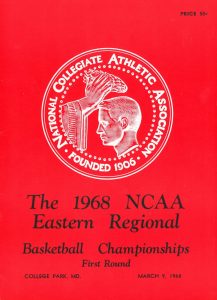 At the 1967 Holiday Festival, the most prestigious in-season tournament held at the World’s Most Famous Arena Madison Square Garden, the Columbia Varsity Basketball team defeated St. John’s to win their first and only Holiday Festival championship. This winter tournament victory was just the beginning. The Lions went on a 16-game winning streak (12 against Ivy League teams). They came into the last game of the season with the best record in Columbia’s history.

At the last game of the regular season, the Lions lost to the Princeton Tigers, 68-57. Both teams finished the season with identical 12-2 records in the Ivy League. In order to win the League and to advance to the NCAA tournament, Columbia had to face Princeton once more in a one-game playoff.

On March 5, 1968, the Lions and Tigers played in front of over 6,000 fans on the neutral St. John’s University court. In one of the greatest victories in Columbia athletics history, the Lions defeated the Tigers, 92-74, for the Ivy League championship and advanced to the NCAA tournament.

As a sophomore in his first year on the Varsity Basketball team, Jim MacMillan gained national attention when he was voted Holiday Festival tournament MVP.

An impressive scoring run during the last games of the season helped the Lions reach the one-game playoff against the Princeton Tigers. In the must-win game “Jimmy Mac” did not disappoint: he scored 37 points in the Lions’ 92-74 victory over Princeton.

The Lions’ 7-foot-tall center Dave Newark had missed the last two weeks of the regular season with a severely strained ankle. His availability to play was in doubt until the very start of playoff game.

Newmark not only started the game but he also won the opening jump from Chris Thomforde and scored the first basket of the game.

At the NCAA tournament, the Lions won their first game against La Salle, 83-69, at the University of Maryland. In the second round, Columbia faced “home” team Davidson in the East Regional semifinals in Raleigh, NC. The Lions lost the game in overtime, 61-59. Columbia won the last game of the dream season (23-5) against St. Bonaventure in the consolation game, 95-75. The Columbia basketball team ranked sixth in the nation. Jack Rohan was voted National Coach of the Year and both Jim McMillian and Dave Newmark earned All-American honors. McMillian also was ECAC All-East and the ECAC Sophomore of the Year, and won the Haggerty Award as the top player in New York City.