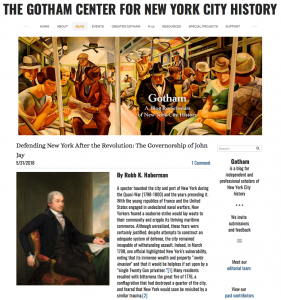 Robb Haberman, Associate Editor of The Selected Papers of John Jay, recently shared findings from his research with The Gotham Center for New York City History:

Recently returned from his mission in London to assume the role of New York’s chief executive, Jay perceived that revolutionary France posed an even greater danger to the United States than had monarchial Britain and he sensed that the political turmoil and warfare unleashed in Europe would envelop other Atlantic nations and therefore emphasized the necessity of military preparedness. “Imbecility invites insult and aggression,” he counseled the state legislature in his inaugural address, “and the experience of ages proves that they are the most secure against war who are the best prepared to meet it.

Read the full post,   “Defending New York After the Revolution: the Governorship of John Jay.”