Earlier this summer some of the items from our Tennessee Williams Papers made their way back to Morningside Heights after having been borrowed for the Morgan Library & Museum’s fantastic show No Refuge but Writing.

In the final weeks of the exhibition, its curator, Carolyn Vega, gave a tour to a group of local rare book librarians. She kindly pointed out the items loaned by Columbia, and it was striking how consistently Williams name-checked the poet Hart Crane, whose papers we also hold.

Tennessee Williams (1911-1983) never met Hart Crane, who passed away in 1932 at the age of 32. The two men had much in common and Williams identified strongly with Crane whose difficult lyricism he admired. Both Williams and Crane felt more at home in New York than in the Midwestern cities where they grew up. The city welcomed their literary ambitions and their homosexuality. Williams considered a stolen copy of Hart Crane’s poetry, also at Columbia, one of his most prized possessions.

The connection as such that Williams desired to be buried at sea, close to where Crane had jumped overboard to his death in 1932. In his Memoirs (first published in 1972), Williams mentions that “a codicil to my will provides for the disposition of my body in this way: ‘Sewn up in a clean white sack and dropped over board, twelve hours north of Havana, so that my bones may rest not too far from those of Hart Crane…'” But when he died in 1983 his family decided to bury him in the family plot in St. Louis. (Thank you to Carolyn for passing along this citation.) 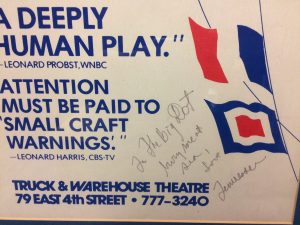 However–and this struck home as we put the materials on loan from the exhibition away–in an inner sanctum of the Columbia University Rare Book & Manuscript Library, the papers of Hart Crane reside a few aisles away from those of Tennessee Williams. Their literary remains if not their bodily remains are adjacent. And the poster pictured above hangs at the end of the aisle.