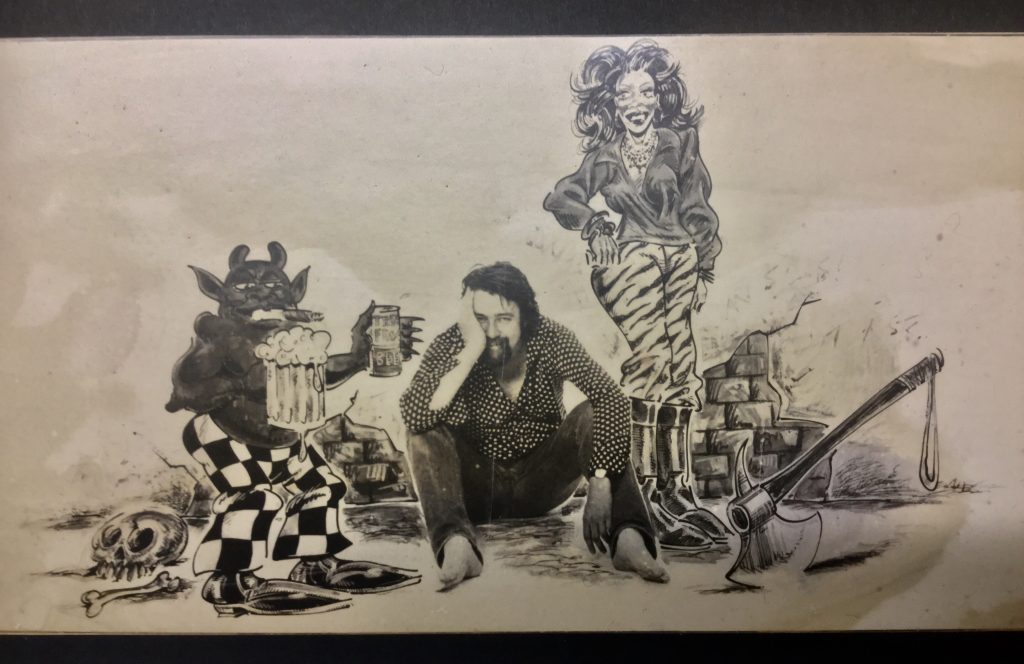 Columbia University’s Rare Book & Manuscript Library (RBML) has acquired the papers of artist S. Clay Wilson, a transgressive pioneer of underground comix, whose mark on creative movements extended from the Beats to punk.

Born and raised in Nebraska, Wilson lived briefly in New York in 1965, where he worked for the East Village Other. Fellow artist Robert Gustafson convinced him to head to San Francisco in 1968, where he drew for a number of underground publications before becoming known for his posters and comics. He would go on to become an icon of the counterculture, and a profound influence on his fellow underground artists, with R. Crumb going so far as to describe Wilson as the strongest and most original artist of their generation.

Wilson’s work appeared in Bill Griffith’s and Art Spiegelman’s Arcade, in R. Crumb’s Zap and Weirdo, in  Kim Deitch’s Gothic Blimp Works, and in a wide array of publications from Bay Area publishers such as Print Mint, Rip Off Press, and Last Gasp. He favored outlaws, pirates, and his own creation, the Checkered Demon, making him a champion to a variety of marginalized groups.

Denis Kitchen, founder of Kitchen Sink Press, offered an assessment of Wilson’s significance, saying, “S. Clay Wilson was the first, in the late ‘60s, to break every barrier that the Comics Code Authority had placed on the newsstand comics our generation of cartoonists was raised on. He not only broke the Draconian rules, his outrageous pirates, lesbians, and checkered demons shattered them. It was Wilson who inspired Robert Crumb to drop his inhibitions as well, and comic books have never been the same since. It took someone as depraved, twisted, and courageous as Wilson to establish comics as an artistic and literary medium that could express its unfettered First Amendment rights in America as much as its high-class cousins in the literary and film worlds.”

The collection includes juvenilia, notably a scrapbook kept by his mother featuring art made from the age of four onward; sketchbooks; extensive and extensively-illustrated correspondence; “jomos,” or small zines done in collaboration with other artists; original art and posters inscribed by fellow underground artists Trina Robbins, Victor Moscoso, Spain Rodriguez, and others; material documenting his work with collaborators from William S. Burroughs and Terry Southern to MTV; Wilson’s own comix collection; over 800 photographs; contracts, and much more.

Professor Jeremy Dauber, who co-teaches Columbia’s “American Graphic Novel” course with former DC Comics president Paul Levitz, notes, “Savage, offensive, uncompromising, Wilson was arguably the most important underground artist of the era, the one who illuminated the influencers … It’s impossible to tell the story of comics without engaging with his work, but for some, this may be insufficient, or faint praise. So let me put it another way. Anyone who wants to study and teach the history of outlaw culture in America, to understand the dark corners that lurk at the underbelly of American free thinking and radical imagination, has to grapple with Wilson’s work. This collection is essential.”

Wilson suffered a traumatic brain injury in 2008, bringing his creative career to a close, and making this collection a complete record.  As Karen Green, the Curator for Comics and Cartoons, says of the acquisition, “This is an almost unparalleled record of the arc of an artist’s career from childhood through maturity. To see well-known Wilson motifs, for example, such as pirates, appearing in his middle-school drawings, is just extraordinary. It’s also moving to witness evidence of his close relationship with his family, as evidenced by correspondence, homemade holiday cards, and his mother’s comprehensive record of his artistic development.”

The acquisition supports a growing collecting strength of the RBML: the history of comics and their creators, most notably with the archives of underground comix publisher Kitchen Sink Press, the comix collection of Roger Taft, and many of the titles in the Steven Boss humor magazine collection. It fits as well into a context in which one finds a collection of William S Burroughs papers as well as finding some common ground with the papers of controversial publisher Samuel Roth.

The Wilson archive will be opened to researchers in 2019.