The Columbia University Archive’s spookiest (and only) documented ghost story begins on a dark and dusty evening in 1945, when Professor Jeffery related to Columbiana curator Milton Halsey Thomas a harrowing tale that he had heard nearly a decade earlier from John D. Prince, a professor of East European Languages. Thomas took notes on the story, and later attempted to sleuth out the details as Jeffery had narrated them:

On the night of May 22, 1936, Prince was walking the lonely corridors of Philosophy Hall, en route to a meeting with President Butler. While descending a darkened stairway he experienced a distinctive but familiar feeling — “a smart pat on his kidneys” — that he associated with Richard Gottheil, a professor of Semitic Languages, who had long occupied the office next door to his, and who “used to deliver” that exact sort of friendly nudge “from time to time.” When Prince turned to look for his colleague, he found only an empty staircase.

A few minutes later, during Prince’s meeting with the president, secretary Frank Fackenthal entered the office to inform them of some sad, and — in the context — spooky news: Professor Gottheil had just died at his home on the Upper West Side.

Returning, shaken and saddened, to his office, Prince encountered a graduate student, Harriet Levy, “in hysterics.” She too had just had a spectral encounter with the deceased professor. She had been sitting at a desk that evening, and had seen him in the hallway. Since she had the key to his office, she got up and followed after him. As she went to unlock his door, Gottheil had glided by her in silence, “passed through the closed door, and disappeared.”

In the days after hearing Professor Jeffery’s dramatic narrative, the Columbiana curator worked to authenticate the story. He interviewed Frank Fackenthal, who would soon be named university president, about his memories of the incident. His terse summary of their conversation says only that “Mr. Fackenthal cannot confirm any part of this.”

But this non-denial denial only raises more questions about the “Ghost in Philosophy Hall.” 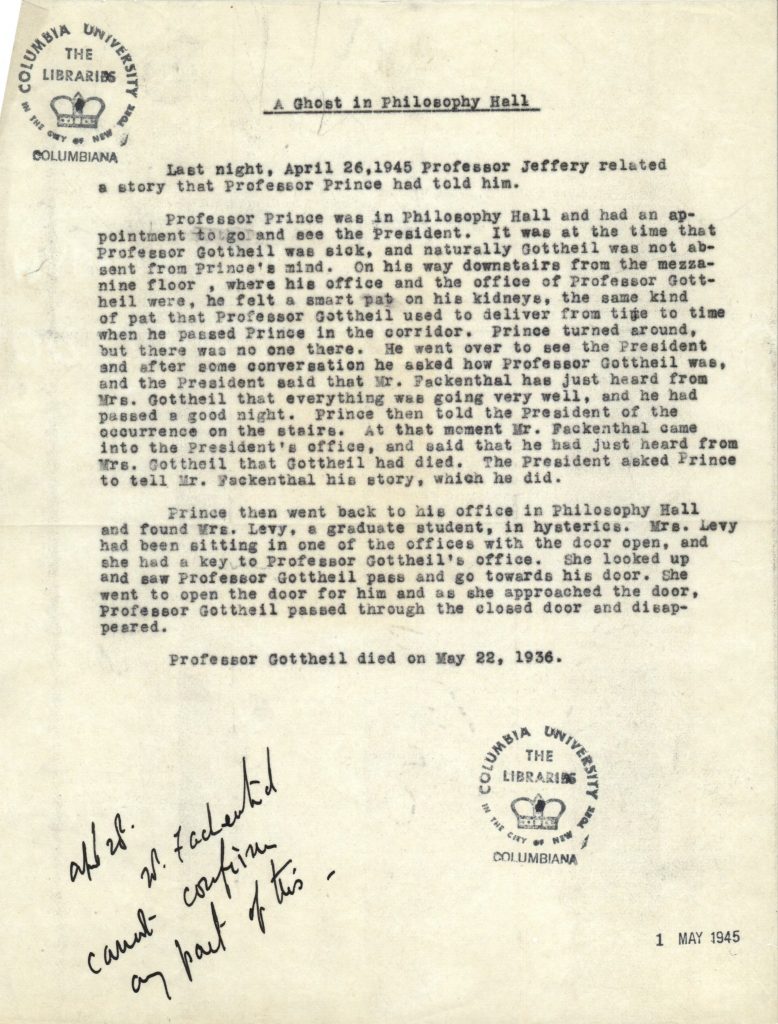