In 1927, an Italian medievalist and prominent Fascist named Piero Misciattelli gifted to the Columbia University Libraries an autograph letter written by Thomas Jefferson at Monticello in 1821.  Jefferson’s letter to Parisian booksellers DeBures Frères placing an order for his burgeoning library was, according to an extract from the Columbia Trustee Minutes of October 3, 1927, “hitherto unpublished and unknown.”

Such a remarkable gift prompts several questions: What was the connection between Columbia President Nicholas Murray Butler and a Fascist university professor? How did this Italian scholar of medieval mysticism and literature acquire an American president’s epistle sent to Paris in the 19th century? Why would Misciattelli, a loyal Fascist, express open admiration for an American champion of democracy like Jefferson? 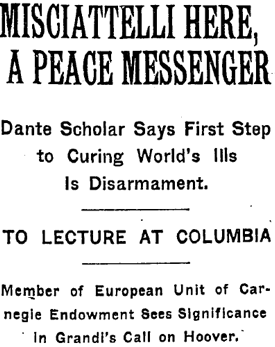 Though the letter’s provenance and its pathway to Misciattelli’s possession remain a mystery, the esteem for Jefferson and the relationship between Butler and Misciattelli hinges upon the Carnegie Endowment for International Peace (CEIP). An international think tank founded by Andrew Carnegie in 1910, CEIP was, and remains, dedicated to the cause of advancing world peace. While also serving as Columbia’s President, Nicholas Murray Butler steered the CEIP for 20 years, 1925-1945, through the entire Fascist ventennio and the ravages of WWII.  Misciattelli, a member of the European Committee of the Division of Intercourse and Education of the CEIP and thus known to Butler, shared Mussolini’s ironic Fascist policy of peace through disarmament. In a New York Times article from October 1931 announcing Misciattelli’s visit to New York to lecture on Dante at Columbia’s new Casa Italiana, he is quoted parroting Mussolini’s rhetoric:

“Disarmament is the first condition of peace, wealth and real progress for the whole world. Of course, no country can have social peace without order and discipline and all of the other old Roman virtues. Mussolini believes, as does bold young Italy, that the spirit of Roman laws, of Roman civilization, is immortal. …Mussolini is a sincere advocate of international peace.”

The NYT article also includes Misciattelli’s thinly-veiled attempt to assert a long-standing amicable relationship between Italy and the United States by referencing an 1853 message sent by President Abraham Lincoln to famed Italian physicist Macedonio Melloni. So perhaps it’s not surprising that Misciattelli would have acquired the Jefferson letter and then gifted it to a prestigious American university such as Columbia, particularly since Misciattelli and Butler were supposedly proponents of the same peaceful ideology.

Despite his status as a professor at the University of Siena, Misciattelli, also a Marquis, lists his address on the letter to President Butler as Piazza Venezia 5, in Rome. Piazza Venezia was the literal heart of the Fascist regime, as the Palazzo Venezia’s infamous balcony (located at number 10), was the site of so many impassioned Mussolini orations to the Italian people. If Misciattelli’s base in Rome was located just steps from Mussolini’s office then we can safely surmise that he was in favor with Il Duce, perhaps because of the inroads he was making in spreading Fascist ideology through his lectures, his work on the CEIP, and his strategic gifts of friendship to universities like Columbia.