Editor’s note: A few weeks ago, I had the pleasure of seeing a new documentary about Nobel laureate and novelist, Toni Morrison. In the film, The Pieces I Am, her editor, literary scholars and friends discussed Morrison’s unwavering commitment to writing about African-American life as quintessentially American life. Central to her writing life was not only her own work, but the care with which she stewarded other writers as an editor at Random House. This re-published profile takes look at one researcher’s work on Morrison’s editorship through the Random House Archives, housed here in the RBML. It’s both a pleasure and an honor to be the caretaker for knowledge that, in some small way, fosters work that makes lives richer as Morrison’s life and writing does in perilous times. Rest in Power, Ms. Morrison. – Kimberly Springer, Curator for Oral History

We see them every day, handing them a key as they walk in each morning, and receiving it back toward the end of the day. Most often they are hunkered down over a particular archive, getting to understand a portion of one of our archives better than anybody here. We await the longer scholarly projects that they are developing from this research but in the nearer term thought it would be interesting to give a preview of their work.
In this brief interview from August 2018, Curator for Literature Karla Nielsen, asked Dana Williams, Professor of African American Literature and Chair of the Department of English at Howard University in Washington D.C., about her research on Toni Morrison’s work as an acquisitions editor at Random House. Dr. Williams obtained her Ph.D. from Howard and first became interested in this topic as a graduate student. After completing several other book projects, Dr. Williams has returned to Morrison and to the Random House Archive at the Columbia University Rare Book & Manuscript Library, where she she has made several trips to the archive over the years to review Morrison’s editorial files.

What is your research project?

I’m currently writing a book on Toni Morrison’s editorship at Random House Publishing Company. For now, I’m calling it “Toni at Random.” The project involves considering Morrison’s role as editor of over 50 trade books in different genres–novels, short story collections, poetry collections, autobiographies, non-literary books, and a cookbook among them.

How did you become interested in Toni Morrison’s editorial work?

I first became familiar with Morrison’s role as an editor in a graduate seminar I took with Eleanor W. Traylor, who is a close friend of Ms. Morrison’s. In some ways, Eleanor read alongside Morrison as the books she edited by black women novelists especially were in production. When a book came out, Eleanor would be one of the people she’d send it to for a scholarly reading. Having taught at Howard together, too, they were fast friends who talked a lot about books, all kinds of books. So, in Eleanor, Ms Morrison found a kindred spirit and an insightful reader who had her finger on the pulse of African American literature.

In that graduate seminar, we read the fiction of Henry Dumas, Toni Cade Bambara, Gayl Jones, and Leon Forrest, all authors Ms Morrison edited. The idea of exploring the role Ms Morrison played as midwife to a generation of writers on the heels of the Black Arts Movement never left me. I’m only now getting back to it, years later, after writing a book on Leon Forrest and teaching these other writers over the last 10 years or so.

What are you finding in the archive that is relevant to your project?

I’m finding all kinds of gems (and new rabbit holes that could be projects in their own right). But I’m most interested mining the archive to provide a critical context for the pre-production side of the works Ms. Morrison edited. Some authors have more material in their files than others, and that can be frustrating when there is a single folder or two and rewarding when there are boxes of files for an author or a book.

There are things like the editorial fact sheets that give us hints about us how Morrison pitched the book to the editorial team, marketing documents that show how she promoted the book, and correspondence with the authors that show how she interacted with them to help improve the book. I’m also struck by the internal memos in the collection that show her personality and her role as a force to be reckoned with within the company. She held her ground as the only black woman senior editor at the company for some years. And she built a network in the industry to get her authors as much exposure as possible from the critics who could make or break a writer’s career with the right kind of or too little attention.

What is the most interesting thing that you have found in the archive?

That’s a tough question. It’s all so interesting, well except things like expense reports, but even those are telling. I think I’m most fascinated by how intimately involved she was in the process of making a book. From reading the manuscript and commenting on it extensively to securing a typist for a writer to choosing the color of the book jacket and ensuring that the book received as much critical attention as possible, she did it all.

I think I’m most surprised by how quickly she was able to build a community of writers, scholars, and critics when her work as an editor began with her as an unknown whose focus was to be textbooks for high school students. She must have had an incredible mind to learn so much so fast and to acquire so many pivotal authors on such a wide range of topics, all the while becoming an important writer herself. I wonder how she managed it all.

How do you think your project will change the way that we think about Toni Morrison?

I think knowing all that Morrison did as an editor will likely encourage us to think of her editorial work as being as significant as her fiction. As important as she is to American letters as a writer, she is as important as an editor. 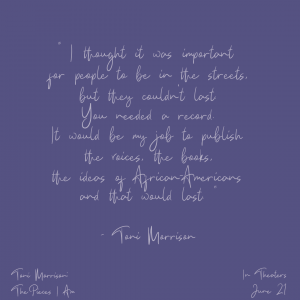