This month, on September 4, William Yukon Chang (鄭玉安), died at the age of 103. Born in Honolulu in 1916, Chang earned a B.A. in Journalism from St. John’s University, Shanghai. In 1947, he left his job as the editor and columnist of The China Press, a daily English-language newspaper, in Shanghai, and moved to New York City.

From 1955 to 1972, he almost singlehandedly wrote, edited, and published the Chinese-American Times (CAT), a monthly English-language newspaper that drew the world’s attention to what was going on in New York’s Chinatown. The newspaper also provided a venue through which Chinese American communities everywhere — from Maryland to Tennessee, from Oregon to Vancouver — could read and write about their own lives. 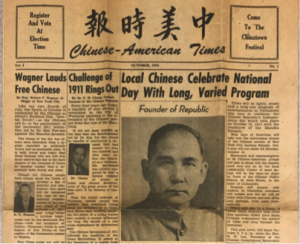 A typical front page of the Chinese-American Times.

The Rare Book and Manuscript Library’s recently acquired William Yukon Chang Papers contains a variety of rich materials on Chang’s extraordinary life and career. Chang’s grandparents emigrated to Honolulu from China. His family prospered from raising coffee and running a grocery store. They sent Chang to attend college in Shanghai after he had graduated from McKinley High School in Honolulu. Just before the Communist takeover, Chang left his job at The China Press and hitched a flight to the U.S. En route through Minnesota with an American friend, Chang met Tang Kou Mei (湯國梅), the first daughter of the Nationalist general Tang Enbo (湯恩伯) and an exchange student at St Mary’s College, Winona. The two got married in 1952 and raised three daughters, Dallas, Marina and Priscilla. 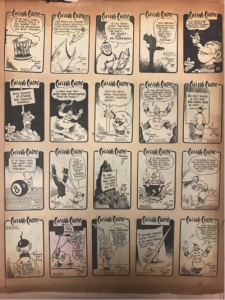 Ching Chow comics that were drawn by Stanley Link and published by News Syndicate Co. Inc in 1945 and 1946. The title character was a stereotypical Chinese man with slanted eyes and a big toothy grin and offers Confucius-style wisdom.

The collection holds many of Chang’s China Press columns and a fascinating scrapbook that Chang made using clippings from the Ching Chow comics published by the News Syndicate Co. Inc. The comics in the scrapbook date from February 1945 to July 1950.

The collection documents Chang’s personal life with its extensive holding of photographs and scrapbooks related to his family and life in Honolulu, Shanghai, and New York. There are also rare photos of the Tang family in different parts of China, as well as yearbooks and scrapbooks that pertain to May Tang’s travels and schooling in the U.S.

The collection’s CAT series consists of every issue of the newspaper (except February 1965), voluminous correspondence, photographs and subscribers index, and advertisement printing plates, checks and receipts. William Chang spent $150 of his own money to put together the first issue of CAT in 1955. Following the publication of the first issue, Chang began to compile news sent by correspondents in San Francisco, Boston, Philadelphia as well as many other cities in the U.S. and around the world. CAT focused on all subject matters, from the election of a Chinese-American candidate for public office, to celebrations of Chinese Lunar New Year, to talk of welfare projects in Taiwan. Letters to the editor aired concerns over everything, from the lack of recreational space for youths in Chinatown to the derogatory depiction of the Chinese in magazines and on television. Besides writing and editing articles, Chang oversaw the budget, managed a staff of volunteers, and distributed the paper with the help of his family.

The pages of the Chinese-American Times offer insights into myriad aspects of Chinese American life. Besides elections, immigration, housing, and health, the newspaper also covered topics including business, sports, arts, fashion, and religion. The letters to editors and subscribers’ index shed important light on the demographics and concerns of the papers’ audience. Besides Chinese American college students and professionals, the paper also attracted the attention of mainstream journalists, educators and civic leaders. 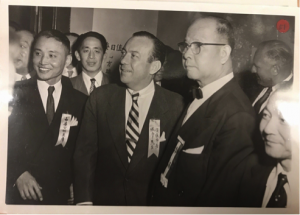 William Chang with mayoral candidate Robert F. Wagner Jr. during his visit to the Chinese Consolidated Benevolent Association in Manhattan, circa 1953

A fixture in New York politics, Chang worked to address the lack of Chinese American representation in the city’s administration. In the next three decades, he worked tirelessly on several fronts to project the community’s voice and increase its political power. Through publishing CAT, Chang hoped to draw more attention to the needs of Chinese American New Yorkers and to get out the Chinese-American vote. His service in local social and civic groups, including the Two Bridges Neighborhood Council, Hamilton-Madison House, and Manhattan Borough President’s Planning Board No.1 helped bring about improvements in education, health, housing, and many other areas in the Chinatown community. Chang’s writings and community work challenged perceptions of Chinese Americans as an oddity and empower them to demand help as deserving citizens. 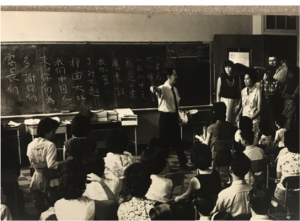 William Chang, Chinese Coordinator of the Two Bridges Neighborhood Council, speaking to immigrant Chinese parents at a meeting, circa 1966

In addition to Chinatown and Chinese American life, the collection also has rare holdings on social service and activism in post-World War II Lower East Side. A large influx of post-war migration, especially from China, made the neighborhood’s existing social and health services inadequate. Combining government grants with private donations, various social agencies and activist groups emerged to address the needs of the immigrant community. In 1966, William Chang worked as the Chinese Coordinator of the Two Bridges Neighborhood Council and helped to set up the federally funded remedial readings and adult education programs for Chinese immigrants. It also includes community studies and reports on issues such as education, housing, juvenile delinquency, mental health and substance abuse.

This collection will be opened to the public by mid-October, 2019. Please see Museum of Chinese in America’s William Yukon Chang collection, which is processed and open for research. Also see The New York Times obituary of Chang.