But that is not the only Columbia football-New York Yankees connection. During our research for the exhibition, we noticed that in the 1940s, the cover artwork on the football programs seemed not-Columbia specific. For example, the football player on this 1942 cover is wearing a red and green uniform and the photographs in the “V” shape include a stadium (not Baker Field) and marching band (!). 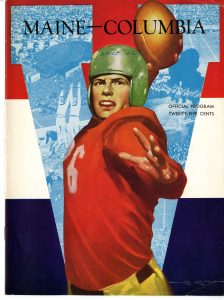 In fact, in 1943, we found the same cover image for a Columbia home game (against Princeton) as for a Cornell home game (against Columbia): both institutions licensed and featured the same artwork just a few weeks apart. The work was done by sports artist (and New York Sports Museum & Hall of Famer) Henry Alonzo Keller, or as he signed his name, Lon Keller. Keller’s work was featured in professional, college and high school program covers for football, basketball and baseball. But his best known work is the New York Yankees top-hat-on-the-bat logo, which first appeared in 1926.  Keller’s work appeared in Columbia football program and in Yankees programs during the 1940s and 1950s.

You can find the Columbia football programs in the University Archives’ Historical Subject Files and you can also view a gallery of Lon Keller’s work online at http://www.lonkeller.com.