The Chinese codebooks were essential tools for encoding and decoding confidential messages in the age of telegraphic communication under the Chinese Nationalist governance. Messages exchanged between high level officials were often encoded to prevent information leaks. Unlike the codes in English, one might wonder how the Chinese encoded telegrams as its writing system is entirely logographic.

During the processing of the Li Zongren papers and the Wellington Koo papers, Chinese telegraphic code books were found in the collections. Since these individuals were prominent statesmen during the Republic of China period, one would be curious to know how were these codebooks utilized by and how these codebooks are different compared to other telegraphic codebooks. 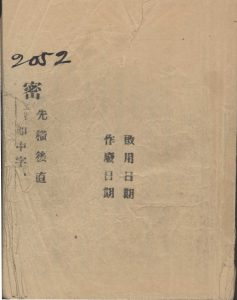 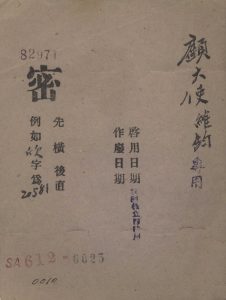 To understand how the Chinese created an intelligence network based on codebooks under the Chinese Nationalist governance, Kuzuoglu’s article on Chinese cryptography is very informative in describing how various codebooks worked and the history of cryptography during the Republic of China period. He notes that “since the use of ciphers was categorically impossible for Chinese characters, physical codebooks, which arranged Chinese characters in various ways, were of necessity the primary agents of cryptography. Chinese encryption did not use a “key,” typically found in ciphers, because a Chinese key could not exist independently of a codebook; the codebook, with different forms of indexical arrangement, was the key…”

As these codebooks were the “key” to decipher messages, they were customized and tailored specifically for their owner. The characters and words appear in the codebooks can be quite political and were carefully chosen based on the common words they use according to their role in the government. The characters and words in the pages were usually arranged in the order of the radicals. 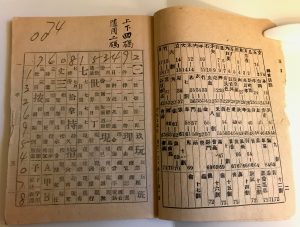 Inside pages and table of contents based on character radicals in the Li Codebook. 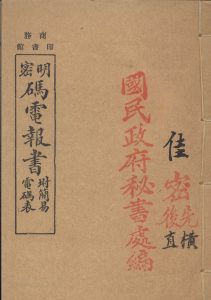 Instruction page from the Jia codebook on how to encode and decode messages.

A look inside the pages of the codebook, one would notice the instructions and the charts for encoding dates along with other supplemental information. Because Chinese writing system is logographic, each character is transcribed into a string of digits or alphabets. The digits come from the blocks with characters and words in the codebook: the first two numbers could be the page number, while the last two numbers are the 0-9 numbers in the first column/row (first horizontal then vertical, or vice versa), then the codes can remain as numbers or encoded into alphabets or go through a security algorithm for an extra layer of security. However, the arrangement of the numbers can change over time.

Occasionally, one might find irrelevant character in the beginning of a telegram. These characters could be significantly important in identifying the date which the telegram was created. During the early stages of telegraphic communication, it is known that “every character is gold” (字字是金) because the cost of the telegram depends on the number of characters in the message. Using two characters to replace the date was cost-efficient.

Earthly branches for month (代月份地數目) and Rhyme for day (代日期韻目) on the index pages of the Jia Code Plain-Cipher (佳密).

The system of encoding dates with two characters was invented by Hong Jun (洪鈞), a Chinese ambassador to Europe during the Qing dynasty. The system provides a new way of encoding the date and distinction of date from the contents of the telegrams. To encode the month, it uses the twelve earthly branches (十二地支), traditionally used to represent the month and the animal zodiacs as well as the time (two hours in one branch). For example, January is substituted by the first branch, zi (子); February is chou (丑), March is yin (寅) and so on… As for the day, the system is known as “rhymes for day” (代日韻目). The rhyming character used to replace the day comes from the Pingshui Rhyming Scheme (平水韻), a popular influential rhyming system in Chinese poetry after the Tang dynasty. The date encoding method also appears on the instruction and index pages along with other helpful supplemental information. 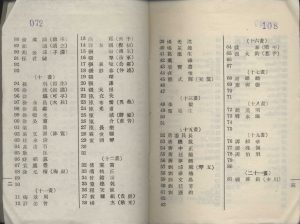 Pages from the Koo codebook index for Names and Locations. The index provides numerical codes for locations and major Chinese political figures as well as their courtesy names. Arranged by the number of strokes in their last name.

These telegraphic codebooks were not only useful tools for encoding and decoding confidential messages, but they also demonstrated how knowledge of culture, politics, and society was incorporated in the development of cryptography in China. The codebooks in the collections would most likely be of interest to scholars who conduct research on the history of communications and cryptography in China, specifically during the Republic of China period.