But Montgomery called the trick play and Barabas ran down 17 yards, crossed the goal line 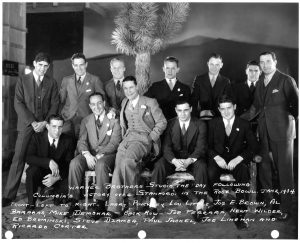 standing and scored the only touchdown of the game. After the game, the team went to Hollywood and Montgomery took a screen test and was offered a contract by Warner Brothers.

Coach Lou Little was able to convince him to return to Columbia for the spring semester and graduate. In another version of that story, Montgomery was prevented from having his screen test because of a black eye (or a black eye and a bruised nose) he received during the game. No matter, Montgomery was clearly a star.