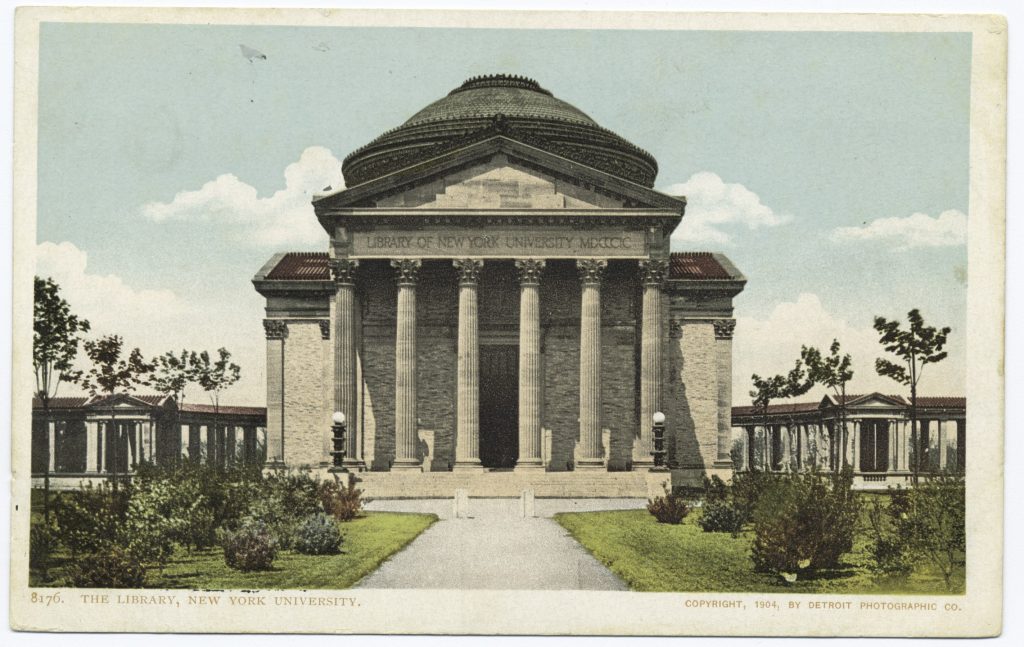 McKim’s plan for the Columbia campus featured a library as its center and that library, now known as Low Memorial Library, opened in 1897. But Columbia was not the only City university looking to build a new campus with a central, architecturally-significant library in the 1890s. NYU, or the University of the City of New York as it was known then, opened their own Gould Memorial Library in 1899.

Low Memorial Library was the first Columbia structure built on the new Morningside Heights campus. It was funded by Seth Low, a graduate of Columbia College Class of 1870, in memory of his father, Abiel Abbot Low. The building was designed by Charles Follen McKim of the firm of McKim, Mead and White. The library was modeled on the Roman Pantheon with its columned portico and a rising, central dome. There are balconies along the base of the dome, with the north balcony featuring four classically-inspired statues: Euripides, Demosthenes, Sophocles and Augustus Caesar. The two massive columns of Connemara green marble from Ireland at the entrance lead to the octagonal reading room surrounded by sixteen columns of green granite from Vermont.

Gould Memorial Library was the first NYU building in their new University Heights campus in the Bronx. It was funded by Helen Miller Gould, a graduate of the NYU Law School program for women in 1895, in memory of her father, Jay Gould. The building was designed by Stanford White of the firm of McKim, Mead and White. The library was also modeled on the Roman Pantheon, with a columned portico and a rising, central dome. There are balconies along the base of the dome, with 16 statues featuring the Muses: Polyhymnia (sacred poetry), Calliope (epic poetry), Mnemosyne (memory) and Urania (astronomy and the sciences). Sixteen columns of Connemara green marble from Ireland surround the circular reading room.

With the same inspiration and even architects from the same firm, the two libraries, however, went in different directions. McKim’s Low Library uses little ornamental decoration. For example, while Low’s center dome is simply painted blue, White’s Gould Library features intricate stucco carvings which lead to the center of dome, or the “oculus,” originally made of Tiffany glass. At Gould, there are also inscriptions of literary quotes and the names of great thinkers (as later featured in Butler Library) which include Cervantes but also Confucius, Mohammed and Isaiah.

Unfortunately, in 1969, an arsonist set fire to the Gould auditorium located beneath the reading room and the building suffered serious damage. In 1973 NYU abandoned its uptown campus. The site was eventually bought by CUNY and turned into the Bronx Community College. While Gould has not returned to its former glory, both buildings are worthy monuments.