Join the Lehman Center for American History for a talk by Geraldo Cadava (Northwestern University) on the author’s new book, The Hispanic Republican: The Shaping of an American Political Identity, from Nixon to Trump.

In the lead-up to every election cycle, pundits predict that Latino Americans will overwhelmingly vote in favor of the Democratic candidate. But because of decades of investment and political courtship, the Republican party has had a much longer and stronger bond with Hispanics. How is this possible for a party so associated with draconian immigration and racial policies? Intertwining the little understood history of Hispanic Americans with a cultural study of how post–World War II Republican politicians actively courted the Hispanic vote during the Cold War and periods of strife in Central America, historian Geraldo Cadava illuminates the history of the millions of Hispanic Republicans who have had a significant impact on national politics since the 1960s, shining a crucial light on a rapidly changing demographic that will impact American elections for years to come.

This Talk is Part of the Lehman Center for American History’s 2020-21 “American Politics, American Identities” series. See below for more information about future events. 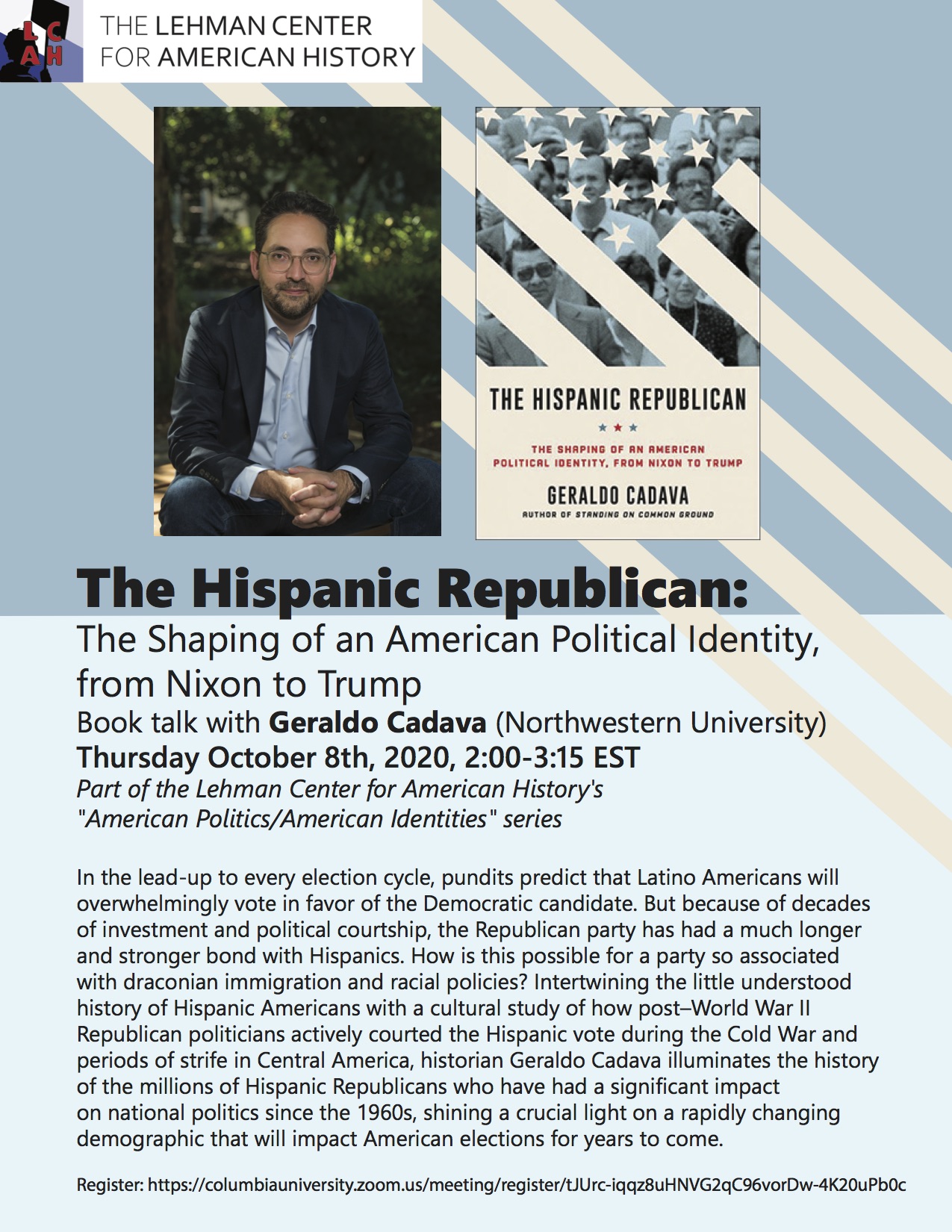 And Join Us Next Week:

Thursday, October 15th, 2020
Book Talk with Martha Jones (Johns Hopkins University)
Vanguard: How Black Women Broke Barriers, Won the Vote, and Insisted on Equality for All
Part of the Lehman Center for American History’s “American Politics/American Identities” series
12:00-1:15 PM EST, Zoom
https://columbiauniversity.zoom.us/meeting/register/tJwqdO2qrDIrEt0jANQHftWkPDQRc9St0ToDIn the standard story, the suffrage crusade began in Seneca Falls in 1848 and ended with the ratification of the Nineteenth Amendment in 1920. But this overwhelmingly white women’s movement did not win the vote for most black women. Securing their rights required a movement of their own. In Vanguard, historian Martha S. Jones offers a new history of African American women’s political lives in America. She recounts how they defied both racism and sexism to fight for the ballot, and how they wielded political power to secure the equality and dignity of all persons. From the earliest days of the republic to the passage of the 1965 Voting Rights Act and beyond, Jones excavates the lives and work of black women who were the vanguard of women’s rights, calling on America to realize its best ideals.