On March 22, 1933, not even three weeks after President Franklin D. Roosevelt (Law 1907) took the oath of office, he signed the Cullen-Harrison Act, authorizing the sale of low-alcohol beer and wine. This was the first step on the path to ending Prohibition. And Columbia College students rejoiced!

With headlines such as “Foam, Sweet Foam,” the reporters at the Columbia Spectator eagerly followed the return of low-alcohol beer to campus. They reported how area businesses prepared in anticipation of the rush of collegiate drinkers clamoring for the 3.2% beer. The local speakeasies were not too concerned about the change but one acknowledged that the price of beer would most likely have to be lowered. 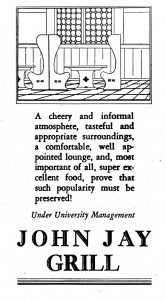 On March 23, the John Jay Dining Hall Committee quickly voted to recommend the sale of beer at the John Jay Grill. A few days later, the Student Board also voted on a “beer resolution” to be presented to the University Commons Committee. But the wheels of collegiate bureaucracy turn slowly. The Committee decided to defer action until the “problem” could be studied thoroughly. The persistent reporters continued their campaign with a series of editorials, “Still No Beer,” in which they claimed that “[a] nation is flooded with beer and the John Jay Grill looks on dryly.”

Looking at Central Files, the administrative records of the Office of the President, one gets a different perspective than what the student newspaper was reporting. President Nicholas Murray Butler was in favor of offering beer at the John Jay Grill. In a letter to James C. Egbert, the chair of the University Commons Committee, Butler says: “I see no reason why beer should not be sold, subject to the established legal restrictions, exactly as soda water and ginger ale are sold.” (May 22, 1933, CF Box 324, folder 11) Similarly, the University Trustees also supported the proposal. The Clerk of the Trustees, Marcellus Hartley Dodge, writes to Butler, “I have no hesitation in saying that I believe that the sale of beer should be permitted under the established legal restrictions on the campus.” (May 26, 1933, CF Box 323, folder 3) Fellow Trustee Archibald Douglas “heartily agree[d]” with Butler that they should “permit the sale of beer in the various dining rooms of the University.” (May 24, 1933, CF Box 76, folder 3) The University applied and received licenses to sell beer in John Jay Hall and Bard Hall, the dormitory at the medical campus.

When the John Jay Grill opened for the fall semester, there was a new bar. University Dining Hall Manager Mabel Reed recruited students as “beer-tasters” to determine which brands of 3.2% would be sold at the Grill. She had received samples from over 30 suppliers. The sale of beer began on Wednesday, September 20, 1933, and over 200 glasses were sold on that first day. Later, the Grill would average about 90 glasses a day, and especially after pretzels joined the menu later in the semester. It took until December 5, 1933 for the 21st Amendment to be ratified and for Prohibition to end.