For many years, the Rare Book and Manuscript Library has been working with the National Library of Israel’s Manuscripts Department to include our digitized Hebrew manuscripts in KTIV, the International Database of Hebrew Manuscripts.  In the 1970s, Columbia Libraries created microfilms for about 700 of the Judaica manuscripts in its collection as part of a joint project with the Institute for Microfilmed Hebrew Manuscripts (IMHM), which is now a part of the National Library of Israel. KTIV is the 21st century version of IMHM, and it provides access to nearly 85% of the world’s known Hebrew manuscripts. At present, there are 1547 records for digitized manuscripts from Columbia’s collections in KTIV.

A few years ago, Columbia Libraries decided to digitize the microfilm for these manuscripts.  While many of our Judaica manuscripts (in Hebrew and other languages) have been photographed in color from the originals and are available on the Internet Archive in addition to KTIV, digitizing these additional manuscripts (albeit in black and white) exponentially impacted access to the collections, in some unexpected ways. The manuscripts that had been microfilmed were not chosen due to their beauty or perceived importance for scholarship, but simply because they were written in Hebrew characters (and even then, some Judaic non-Hebrew character manuscripts crept in as well!).  The broad scope of the selection digitized meant that manuscripts that had been studied rarely or not at all could be made available to a global audience to the first time.

In reviewing some of the images from our microfilmed manuscripts, we found that six leaves of a printed book were included with a collection of manuscript leaves of Mordekhai ben Hillel ha-Kohen’s commentary on the Talmud. The printed leaves included text from  Yitshak Alfasi’s commentary on the Talmud, as well as additional commentary on Alfasi’s work by Nissim of Gerona.  The simple, sometimes uneven, type indicated that the book probably was produced during the first century of Hebrew printing.  A known first edition of Alfasi’s Halakhot was printed around 1480, but that edition only included Alfasi’s main text, without Nissim of Gerona’s commentary.  The second known edition, printed in Constantinople in 1509, has a more complicated layout than our leaves, with commentary on either side of the text.  This edition thus seemed to fall somewhere between the two, with a single commentary to the left of the main text. Conversations with some of the experts in the field of Hebrew printing suggested that the book was likely printed in Constantinople due to its typography.

A closer look at one of the leaves, the beginning of the section for the laws for the holiday of Rosh Hashana (based on the Talmudic tractate of the same name) shows a distinctive decorative mark on either side of the header, which may help to identify the printer in the future.

Another way to identify the date and place of early printed books is to look at watermarks in the paper.  Various papermakers had 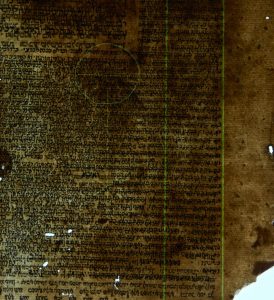 unique watermarks to tout their craft.  Unfortunately, since the leaves seem to have been used in book binding, they had residual glue on them that made it very difficult to see the watermarks under plain light.  The Libraries’ Conservation department placed the pages under special light and found a watermark: a circle with a line underneath. This mark has been dated and placed in various places in the early 16th century, including Venice as early as 1503. There is still more work to be done to identify these mysterious leaves, but one thing is clear: without digitizing the microfilm, the leaves may not have even been found for a few more decades!

There are many other cases of manuscript identification and use thanks to the microfilm digitization. An illustrated Haggadah was identified (and then digitized to show its red, greens, and golds) and described on the Jewish Studies at CUL blog. More recently, we learned of the production of a Yiddish-Hebrew commentary on the weekly Torah portion based on one of the manuscripts in our collection, available via its digitized microfilm on KTIV.

Scanning through the black and white images also helps to identify interesting artistic elements in the collection. A massive prayerbook for the high holidays from the 14th century had been featured in a 2012 exhibition of Hebrew manuscripts, but the delightful anthropomorphic images in the initial letters below were only identified upon scanning through the digitized microfilm.

As a general rule, color photography is considered vastly superior to microfilm for research purposes, but it is also much more expensive – and handling fragile materials too often can cause harm. In the case of the Hebrew manuscripts, digitizing the microfilm did lead to some additional color digitization, and probably will continue to do so.  More importantly, though, it enabled us to provide timely access to hundreds of manuscripts to people around the world who may otherwise have never had a chance to see these unique materials in our collections.