As former Professor of Greek Edward Perry once noted, “in the accounts of the early years of King’s College among the few subjects at first taught there were Greek and Latin.” President Samuel Johnson was the first instructor, assisted by his son, William Samuel Johnson. Classics has a long and proud history at Columbia and the department records are now available to researchers.

In July 1965, recently appointed department chair Gilbert Highet transferred 45 correspondence boxes to the Columbiana Collection, a predecessor of the University Archives. These letter files contained the department’s official correspondence from 1910 to 1955. It is a rich collection that captures the students, faculty members, course offerings, changing requirements, the larger University administration and so much more. In addition to the letter files, the Department of Classics records include the faculty meeting minutes (1903-1992), department by-laws, lists of graduate students, completed dissertations, bibliographies and even some “class books” from the 1880s to the 1930s. Class books are large ledgers used to record class attendance and student grades. 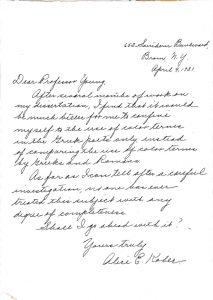 Alice Elizabeth Kober, who received her MA in 1929 and PhD in 1932, was a gifted Classicist with a very heavy teaching load at Brooklyn College in the 1930s and 1940s. She has recently received much deserved credit for her groundbreaking and painstaking work which led to the decipherment of the ancient script known as Linear B. In the Riddle of the Labyrinth, Margalit Fox introduces Kober as the unsung hero of this formidable achievement. Kober created thousands and thousands of homemade index cards to create an analog database via the use of perforations. [1] She collected characters and repeated clusters to detect patterns and variations in the unknown language. But what record of Kober is available at the University Archives? There are copies of her obituaries in the Historical Biographical Files but it was in the Department of Classics records that another glimpse of Kober emerged.

On January 19, 1931, Kober wrote to the Prof. Clarence H. Young, then the department’s Executive Officer, that with the help of Prof. Charles Knapp, she had “come to the conclusion that there may be a dissertation subject in the examination of the influence which the Greek poets – especially Homer and the dramatic writers – had on the use of color terms in the Roman poets of the Republic.” [2] After a few months, Kober realized that this was too ambitious a project to examine all the color terms in both the Greek and Latin authors. On April 9, 1931, Kober again wrote to Prof. Young: “After several months of work on my dissertation, I find that it would be much better for me to confine myself to the use of color terms in the Greek poets only.” [3] Her amended plan was approved by the department and Kober’s dissertation, The use of color terms in the Greek poets : including all the poets from Homer to 146 B. C. except the epigrammatist, completed in 1932 is available at the RBML. In the preface she states that while the work “is by no means exhausted…I have merely prepared a tool” to examine the ancients’ use of color terms. The dissertation’s subject may be unrelated to Kober’s most known-for interests in deciphering ancient scripts but the meticulous lists and the careful catalogues of terms and their usage are all there.

[1] The Alice E. Kober Papers (1932-1950) of the Program in Aegean Scripts and Prehistory (PASP) are available at the University of Texas at Austin.