Happy publication day to Angela Davis! A new edition of her Autobiography was released today by Haymarket Books. The book was originally published by Random House and Bantam Books in 1974, with Toni Morrison serving as editor.

Since it was a joint publishing venture, Bantam provided editorial input on the earliest version of Davis’ manuscript. Toni Morrison, however, strenuously objected to the Bantam reader’s suggested changes. She explained why in the following extraordinary memo to Jim Silberman, who was then editor in chief and publisher of adult trade books at Random House–at least one step above Morrison in the corporate hierarchy.

These materials are in Box 1268 of the Random House records, which are available at the Rare Book and Manuscript Library. Neither the “wholly useless” Bantam report nor Silberman’s response are included in Morrison’s editorial files for Davis’ Autobiography. However, given that Morrison remained the editor of the book, which was published in October 1974, I think we can safely assume that Morrison won this battle.

A transcription follows the images of the memo. Note that the text does include a racial slur. 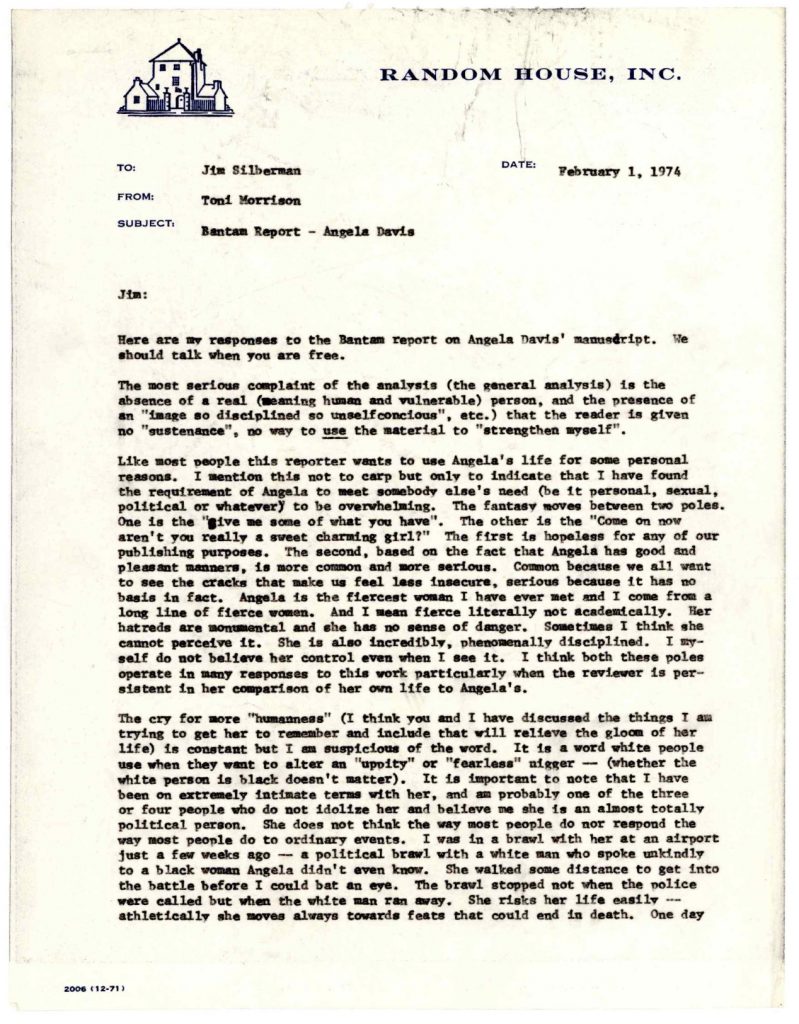 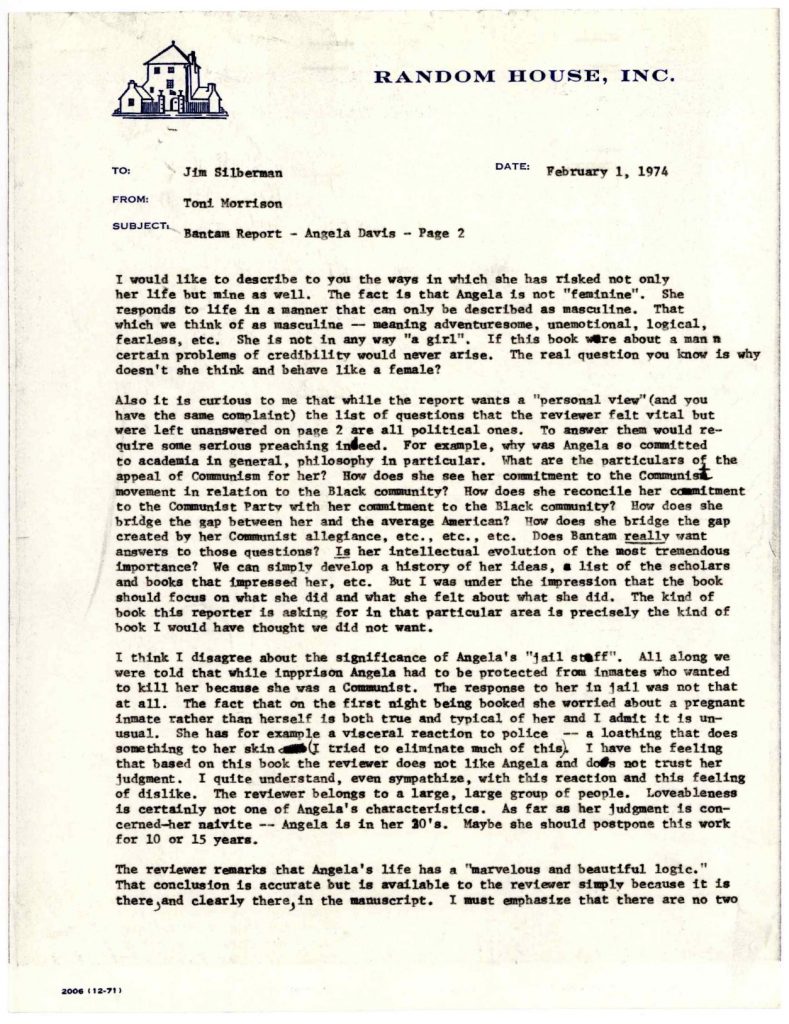 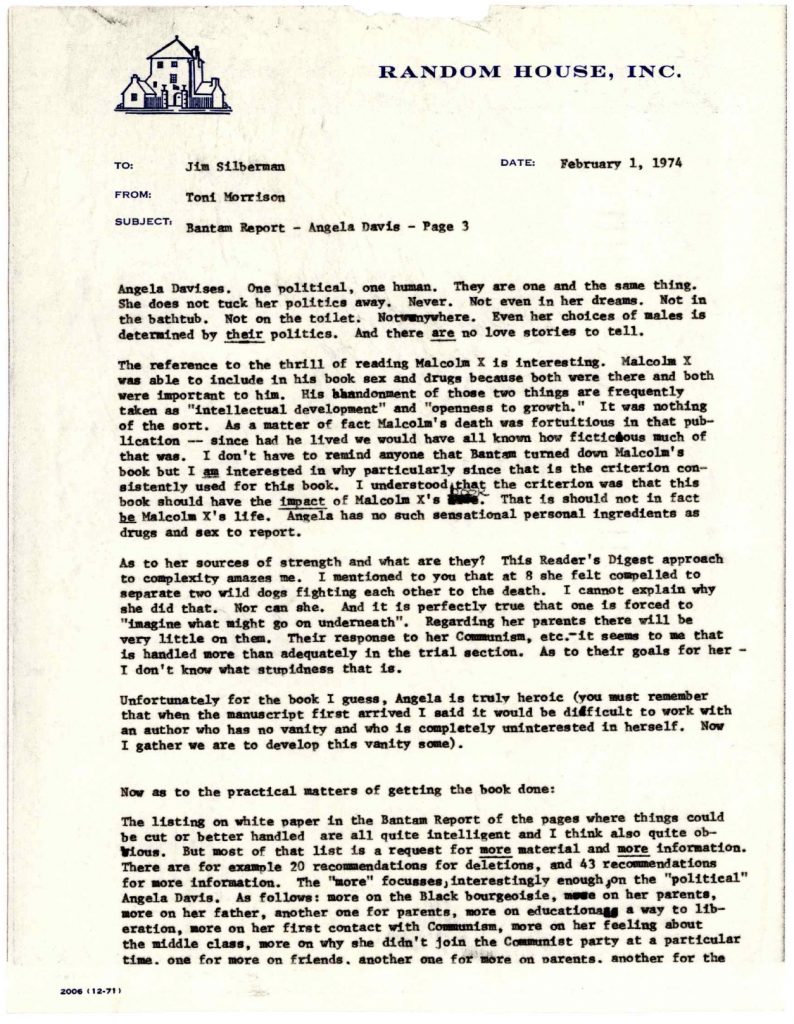 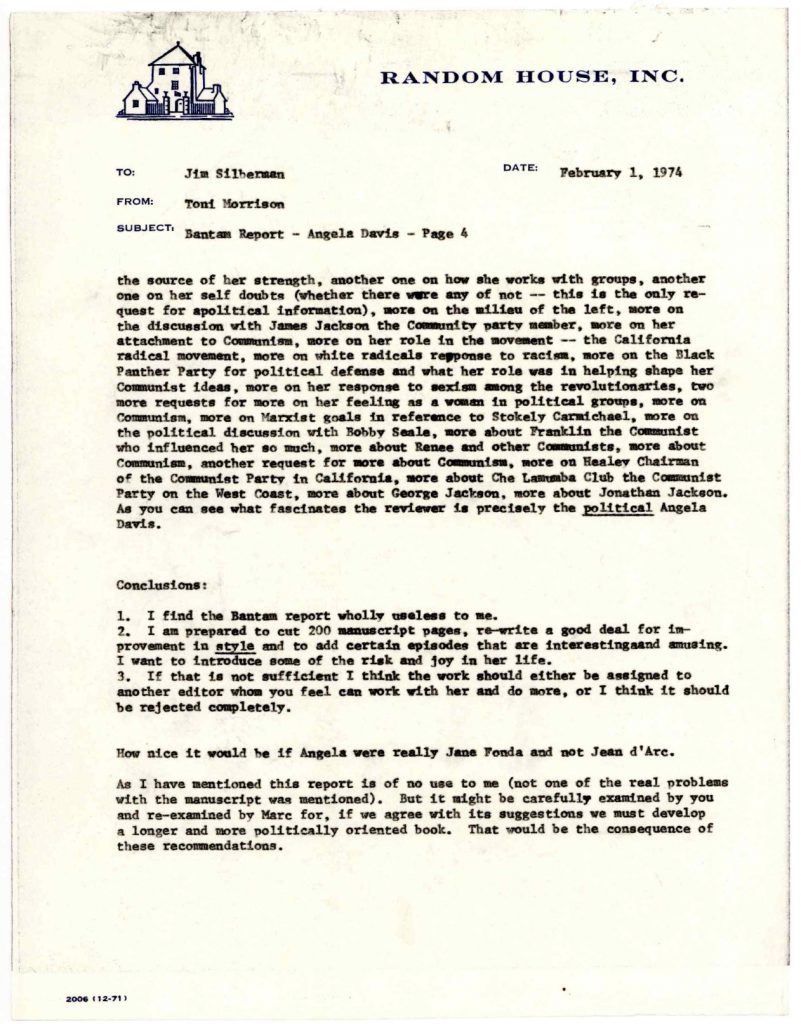 Here are my responses to the Bantam report on Angela Davis’ manuscript. We should talk when you are free.

The most serious complaint of the analysis (the general analysis) is the absence of a real (meaning human and vulnerable) person, and the presence of an “image so disciplined so unselfconscious” etc.) that the reader is given no “sustenance,” no way to use the material to “strengthen myself.”

Like most people this reporter wants to use Angela’s life for some personal reasons. I mention this not to carp but only to indicate that I have found the requirement of Angela to meet somebody else’s need (Be it personal, sexual, political or whatever) to be overwhelming. The fantasy moves between two poles. One is the “give me some of what you have.” The other is the “Come on now aren’t you really a sweet charming girl?” The first is hopeless for any of our publishing purposes. The second, based on the fact that Angela has good and pleasant manners, is more common and more serious. Common because we all want to see the cracks that make us feel less insecure, serious because it has no basis in fact. Angela is the fiercest woman I have ever met and I come from a long line of fierce women. And I mean fierce literally not academically. Her hatreds are monumental and she has no sense of danger. Sometimes I think she cannot perceive it. She is also incredibly, phenomenally disciplined. I myself do not believe her control even when I see it. I think both these poles operate in many responses to this work particularly when the reviewer is persistent in her comparison of her own life to Angela’s.

The cry for more “humanness” (I think you and I have discussed the things I am trying to get her to remember and include that will relieve the gloom of her life) is constant but I am suspicious of the word. It is a word white people use when they want to alter an “uppity” or “fearless” nigger – (whether the white person is black doesn’t matter). It is important to note that I have been on extremely intimate terms with her, and am probably one of the three or four people who do not idolize her and believe me she is an almost totally political person. She does not think the way most people do not respond the way most people do to ordinary events. I was in a brawl with her at an airport just a few weeks ago – a political brawl with a white man who spoke unkindly to a black woman Angela didn’t even know. She walked some distance to get into the battle before I could bat an eye. The brawl stopped not when the police were called but when the white man ran away. She risks her life easily – athletically she moves always towards feats that could end in death. One day [page 2] I would like to describe to you the ways in which she has risked not only her life but mine as well. The fact is that Angela is not “feminine.” She responds to life in a manner that can only be described as masculine. That which we think of as masculine – meaning adventuresome, unemotional, logical, fearless, etc. She is not in any way “a girl.” If this book were about a man certain problems of credibility would never arise. The real question you know is why doesn’t she think and behave like a female?

Also it is curious to me that while the report wants a “personal view” (and you have the same complaint) the list of questions that the reviewer felt vital but were left unanswered on page 2 are all political ones. To answer them would require some serious preaching indeed. For example, why was Angela so committed to academia in general, philosophy in particular. What are the particulars of the appeal of Communism for her? How does she see her commitment to the Communist movement in relation to the Black community? How does she reconcile her commitment to the Communist Party with her commitment to the Black community? How does she bridge the gap between her and the average American? How does she bridge the gap created by her Communist allegiance, etc., etc., etc. Does Bantam really want answers to those questions? Is her intellectual evolution of the most tremendous importance? We can simply develop a history of her ideas, a list of the scholars and books that impressed her, etc. But I was under the impression that the book should focus on what she did and what she felt about what she did. The kind of book this reporter is asking for in that particular area is precisely the kind of book I would have thought we did not want.

I think I disagree about the significance of Angela’s “jail st[u]ff.” All along we were told that while in prison Angela had to be protected from inmates who wanted to kill her because she was a Communist. The response to her in jail was not that at all. The fact that on the first night being booked she worried about a pregnant inmate rather than herself is both true and typical of her and I admit it is unusual. She has for example a visceral reaction to police – a loathing that does something to her skin (I tried to eliminate much of this). I have the feeling that based on this book the reviewer does not like Angela and does not trust her judgment. I quite understand, even sympathize, with this reaction and this feeling of dislike. The reviewer belongs to a large, large group of people. Loveableness is certainly not one of Angela’s characteristics. As far as her judgment is concerned – her naivete – Angela is in her 30s. Maybe she should postpone this work for 10 or 15 years.

The reviewer remarks that Angela’s life has a “marvelous and beautiful logic.” That conclusion is accurate but is available to the reviewer simply because it is there, and clearly there, in the manuscript. I must emphasize that there are no two [page 3] Angela Davises. One political, one human. They are one and the same thing. She does not tuck her politics away. Never. Not even in her dreams. Not in the bathtub. Not on the toilet. Not anywhere. Even her choices of males is determined by their politics. And there are no love stories to tell.

The reference to the thrill of reading Malcolm X is interesting. Malcolm X was able to include in his book sex and drugs because both were there and both were important to him. His abandonment of those two things are frequently taken as “intellectual development” and “openness to growth.” It was nothing of the sort. As a matter of fact Malcolm’s death was fortuitious [sic] in that publication – since had he lived we would have all known how fictitious much of that was. I don’t have to remind anyone that Bantam turned down Malcolm’s book but I am interested in why particularly since that is the criterion consistently used for this book. I understood that the criterion was that this book should have the impact of Malcolm X’s book. That is [sic] should not in fact be Malcolm X’s life. Angela has no such sensational personal ingredients as drugs and sex to report.

As to her sources of strength and what are they? This Reader’s Digest approach to complexity amazes me. I mentioned to you that at 8 she felt compelled to separate two wild dogs fighting each other to the death. I cannot explain why she did that. Nor can she. And it is perfectly true that one is forced to “imagine what might go on underneath.” Regarding her parents there will be very little on them. Their response to her Communism, etc. – it seems to me that is handled more than adequately in the trial section. As to their goals for her – I don’t know what stupidness that is.

Unfortunately for the book I guess, Angela is truly heroic (you must remember that when the manuscript first arrived I said it would be difficult to work with an author who has no vanity and who is completely uninterested in herself. Now I gather we are to develop this vanity some).

Now as to the practical matters of getting the book done:

How nice it would be if Angela were really Jane Fonda and not Jean d’Arc.

As I have mentioned this report is of no use to me (not one of the real problems with the manuscript was mentioned). But it might be carefully examined by you and re-examined by Marc for, if we agree with its suggestions we must develop a longer and more politically oriented book. That would be the consequence of these recommendations.