The John Jay Papers Project, The Rare Book & Manuscript Library, and Columbia University mourn the recent loss of our esteemed colleague and dear friend Jennifer E. Steenshorne. Jenn joined the John Jay Papers in July 2005 and worked as an associate editor on the project for the twelve years following. 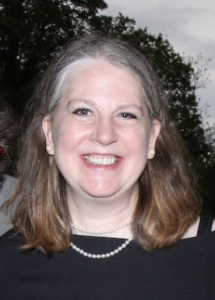 A devoted and highly accomplished editor, she left a distinctive imprint on each of the seven published volumes in the series and carried out with precision the myriad tasks associated with scholarly editing. Jenn particularly excelled in producing “crunchy essays,” a term we used at the Jay Papers to refer to annotation distinguished by meticulous research, lucid prose, and concise presentation.A fine example of Jenn’s literary talent is on full display in volume six, where she expounds on how John Jay’s social calendar proved essential to his diplomatic activity in London during the 1794 negotiations over the Jay Treaty.

Jenn’s contributions to the Jay Papers extended beyond formal editing work. During the completion of volume four, the project experienced a watershed moment—a virtual “stop the presses”—when Jenn confirmed the location of John Jay’s draft of The Federalist 2 in the collections of the Brooklyn Historical Society. Her effort ensured that at the last moment this historically significant document made it into the publication as an appendix. Later, when her tenure as associate editor came to a close in late 2017, Jenn nonetheless maintained her affiliation with the John Jay Papers and continued writing and proofing documents and headnotes for the project’s final volumes.

Jenn was a generous and caring colleague, as I learned firsthand. When I first arrived at Columbia to join the Jay Papers, she showed me how to navigate the office and RBML and helped me take new things in stride. I still have the reassuring message that Jenn sent me at the end of a particularly grueling day: “Thanks for being here! Remember—it’s a lot to take in. You’re doing great (and keep asking questions)!” In addition to inaugurating me into the fascinating world of Jay and Jay editing, Jenn shared her adoration of James Bond, horses and horse racing, Dublin, and decades of living in New York and New Jersey. By far, though, my favorite pastime was swapping cat stories with Jenn. I especially enjoyed hearing of the exploits and misdeeds of Lamont, her stunning Russian Blue.

We extend our deepest sympathies to Brant M. Vogel, Jenn’s spouse and fellow editor at the John Jay Papers. Although we sorely miss Jenn’s presence, her memory does indeed serve as a blessing.

Donations in Jenn’s honor can be made to WBGO Newark.