The University Archives gets plenty of offers of historical materials – some that we want and some that we are not so interested in obtaining. And sometimes, there is something totally unique that we are incredibly excited to add to our collections.  This was the case when we received an email this past summer from Neil Sachnoff, a former employee with a very unique and special jacket.

Back in the 1980s, Neil was director of support operations for the University Center for Computing Activities and headed up the selection and installation of what was then the first large scale IBM/ROLM college telecommunications system in the country. It was a 10,000+ line system with all new wiring and a new telecommunications room in Low Library to replace the old Centrex system supplied by New York Telephone. This was a major multi-million dollar university-wide project that took just over a year to complete. When it was finally completed in 1988, the main members of the team responsible for the installation were given commemorative, sateen jackets to mark their accomplishment. Neil’s Columbia blue “ROLM Phone” jacket is now, happily, part of our Academic Costumes and Textiles Collection. 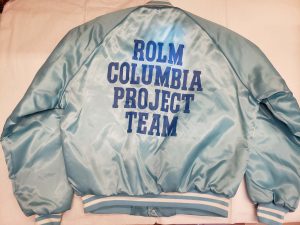 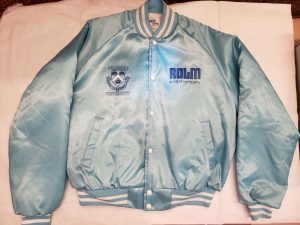 Until the recent transition to the internet-based RingCentral Unified Communications system, IBM/ROLM phones were ubiquitous in campus offices and dormitories for nearly 35 years. At the time of installation, this was cutting edge technology and provided users with new features such as voicemail (or “Phone Mail” as it was referred to on campus), a “camp” button (allowing you to get a call back when faced with a busy signal), call forwarding, call waiting, and single-button dialing of stored numbers. The installation of the IBM/ROLM system also anticipated the rising importance of computers, allowing students with personal computers to connect with the University’s computer facilities by way of “a special adapter.”

Fun fact: the 854 and 853 exchanges we are all familiar with today came into being when ROLM phones replaced the old Centrex telephone system in 1988.

Students were initially skeptical about this new system, especially “Phone Mail” as it meant the answering machines they’d invested in were suddenly not usable on campus. But in time, the system became such an integral part of the student experience that the student newspaper Spectator regularly featured articles about it, including this one from 1991 explaining all of the various features to new students and this one from 1997 about the real woman behind the mysterious “ROLM Phone Lady” – the voice heard on all university-wide broadcast messages.

And the ability to forward voicemail messages? That feature led to an infamous viral phone message in the early 1990s that anyone who was here at the time would know by two words: Little Mermaid. Curious to learn more? Take a listen to the first 20 minutes or so (or read the transcript) of episode 203 of This American Life.