Join the Lehman Center for American History, the Columbia Research Initiative on the Global History of Sexualities, the Institute for the Study of Sexuality and Gender, and the Center for Gender and Sexuality Law for a conversation with historian and author John Wood Sweet on his new book, The Sewing Girl’s Tale: A Story of Crime and Consequences in Revolutionary America (Henry Holt & Co., 2022).

“Excellent and absorbing … Sweet’s book … provides an opportunity … to reflect on the power we give today to legal authorities whose views about basic matters – like what it means for a man to sexually assault women – are so different from what we think, or want to think we think, now.” – New York Times Book Review

On a moonless night in the summer of 1793 a crime in the back room of a New York brothel transformed Lanah Sawyer’s life. It was the kind of crime that even victims usually kept secret. Instead, the seventeen-year-old seamstress did what virtually no oneOctober 6 – The Sewing Girls Tale else dared to do: she charged a gentleman with rape. The trial rocked the city and nearly 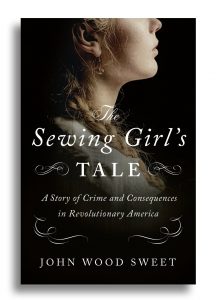 cost Lanah her life. And that was just the start.

Based on extraordinary historical detective work, Lanah Sawyer’s story takes us from a chance encounter in the street into the squalor of the city’s sexual underworld, the sanctuaries of the elite, and the despair of its debtors’ prison—a world where reality was always threatened by hope and deceit. It reveals how much has changed over the past two centuries—and how much has not.

John Wood Sweet is a professor of history at the University of North Carolina at Chapel Hill and former director of UNC’s Program in Sexuality Studies. He graduated from Amherst College (summa cum laude) and earned his Ph.D. in History at Princeton University. His first book, Bodies Politic: Negotiating Race in the American North, was a finalist for the Frederick Douglass Prize. He has served as a Distinguished Lecturer for the Organization of American Historians, and his work has been supported by fellowships from the National Endowment for the Humanities, the Mellon Foundation, the National Humanities Center, the Institute for Arts and Humanities at UNC, the Gilder Lehrman Center at Yale, the McNeil Center at Penn, and the Center for Global Studies in Culture, Power, and History at Johns Hopkins. He lives in Chapel Hill with his husband, son, and daughter.