Pedro Doreste is a researcher whose work on the lasting impact of educational cinema in Puerto Rico brought him to the RBML to investigate the papers of the documentary filmmaker David Flaherty. Doreste’s project, entitled, An Accented Seminar: Puerto Rico’s Division of Community Education at the Flaherty, 1955-1963, examines the seminars hosted by Frances Flaherty  that facilitated discussions both of Flaherty’s work and of the ambitions of 1960s documentary film making more generally. Below, Doreste shares some of his archival finds…

What brings you to Columbia’s Rare Book & Manuscript Library?

My project traces the transnational legacies of the Puerto Rican educational cinema produced by the island’s Division of Community Education (DIVEDCO, 1949-1968) by revisiting the foundational years of the Flaherty Film Seminar beginning in 1955. Held in their rural Vermont farmstead, the Flaherty Seminars were an educational retreat started by Robert Flaherty’s widow, Frances Flaherty, to examine the legacy of the famed documentarist in contemporary independent filmmaking. Joined by a shared investment in film pedagogy, the encounter between the DIVEDCO and the Flaherty participants constituted a unique cinematic contact zone between non-theatrical filmmakers of the hemispheric North and South, culminating in the landmark 1961 edition held in Puerto Rico. Fittingly, the Flaherty Papers at Columbia University were one of the main objects of my research trip. Columbia played a pivotal role in the development of the seminars, as many faculty and staff affiliated with the former Center for Mass Communication were part of the early Flaherty Foundation leadership. Not surprisingly given this relationship, the RBML houses some of the earliest archival material produced by the Foundation.

How long have you been using RBML materials (for this and/or previous research)?

This is the first time I do research at the RBML. This past visit would’ve occurred much sooner had it not been for the Covid-19 pandemic. That said, I’m confident this will not be the last time I visit. I’ve left more than a few relevant Columbia collections on my to-do list, such as those pertaining to DIVEDCO founder Jack Delano or to early Flaherty historian Cecile Starr. The measure of an archive’s promise lies in its capacity to defy exhaustiveness. Here’s a snapshot of one of the seminar meetings: 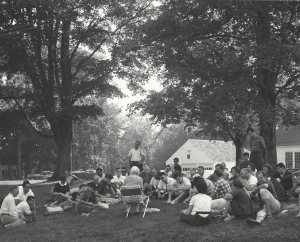 What have you found? Did you come here knowing this material was here?

Too much. The Flaherty Seminars have a long and storied history in the independent film community, but I knew from personal experience that its archival footprint was a bit lopsided toward more contemporary editions. Once I began my research at Columbia, I was surprised to see that the vast majority of the activities of the Flaherty Foundation were related to the planning, fundraising, and development of the seminars in their very first years, a concern reflected in the content of the Foundation’s boxes at the RBML. This included seminar programs, correspondence, opening speeches, enrollment forms, invitations to prospective seminarians, etc. I had to make another appointment just to be able to briefly look at all the pertinent material. The breadth of evidence—and, perhaps more importantly, the intimacy with which the two film-pedagogical institutions collaborated—has allowed me to more finely historicize the extent of Puerto Rican creative and intellectual participation in the seminar’s formative years. Here is a snapshot of an interview with one of the seminar organizers: 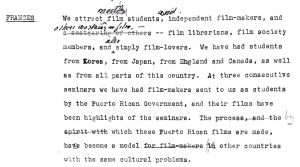 What have you found that’s surprised or perplexed you?

There is a verifiable stylistic and pragmatic similarity between the Robert Flaherty documentary film tradition and the educational cinema produced by Puerto Rico’s Division of Community Education. This link has been explored countless times in the historiography of Puerto Rican cinema. Less attention has been placed on the direct contacts between artists in the Flaherty circle and the founding filmmakers of the DIVEDCO. For example, Benjamin Doniger was an American filmmaker who worked as a sound technician on Robert Flaherty’s final film in 1948 and who would join the DIVEDCO only one year later, producing over a dozen films for the agency into the 1960s. I had intuited that it was through Doniger that the Puerto Rican filmmakers—then considered film apprentices—had been brought to the first few seminars. Through my research at Columbia, I discovered that Benji Doniger had actually never attended a single Flaherty seminar, much to the chagrin of Frances Flaherty, who had twice invited him and had hoped Doniger would bring some of his Puerto Rican “students.” In 1956, for the seminar’s 2nd edition, the first class of DIVEDCO seminarians arrived in Vermont, an inter-institutional collaboration that would continue into the 1970s. Had it not been for Benji’s perennial flakiness, then perhaps no Puerto Rican cinema may have ever graced the side of the Flaherty barn.

What advice do you have for other researchers or students interested in using RBML’s special collections?

I was in New York City for a little over a month. In that time, I visited six archival repositories—city, state, university, museum, and private collections across the city. The Rare Book and Manuscript Library was my favorite archival visit. Their ease of access and their overall generosity allowed me to conduct the most comprehensive review of their materials in the four short days I was there. For one, there are no limits on the number of boxes you can access in one day, provided you have requested them ahead of time. The reproduction policies are not as restrictive as other comparable collections, which is convenient for a transient researcher such as myself. Finally, the librarians and library staff were very accommodating of my hectic schedule, even adding on one impromptu appointment toward the end of my stay. For an out-of-town researcher, these details can mean the difference between a successful research trip and one that leaves you feeling unfulfilled. Archives can be opaque institutions at times, but the helpfulness and flexibility of the library staff made the task of archival research less daunting. Of course, many historians will likely pass through the RBML at some point given the quality of their collection. May prospective researchers be doubly encouraged by the nimble and thoughtful service of the collectors.