Since the New York Juvenile Asylum (NYJA) records were processed two years ago, the RBML has received many inquiries.  In handling these queries, I’ve become quite familiar with this collection and its wealth of information.

While many inquiries come from genealogists, the records also provide primary source material for historians interested in social institutions and the backgrounds and living conditions of orphaned children.

The NYJA was founded in 1851 to house, educate, reform, and find placement for poor, runaway, and homeless children in New York City. Some children came from families undergoing hardship, and were able to return home after a time. Many children, however, were ultimately placed in apprenticeships and sent west on “orphan trains”. The NYJA, in turn, kept a permanent agent in Illinois to arrange for their placement.

The case of a child can be traced through several types of records. To illustrate, information on new arrivals is found in the registers of the House of Reception, which includes basic data on the child’s age, reason for commitment, family, education level, health, and place of birth.  For example, a record for Martin Malone, who arrived in 1860, is shown here: 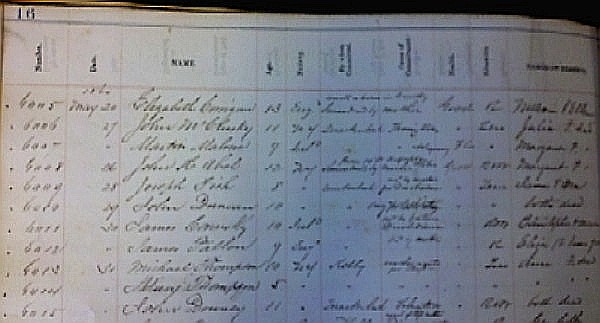 Martin, like many children, was ultimately apprenticed to a farmer in Illinois. The agent’s record includes his date of placement, age, and employer. In another record, case notes detail his difficulties in Illinois: 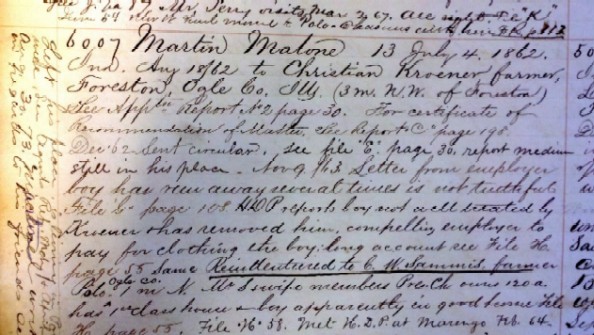 The records can also be used to look at several cases grouped by time or in some cases, by place. The agent’s record lists groups of children that were placed together in the same area, while the case notes are arranged in a roughly chronological order by the date of the child’s initial placement. This page from the agent’s record has basic notes on a group that was placed in Sterling, Whiteside County, Illinois, in December 1863: 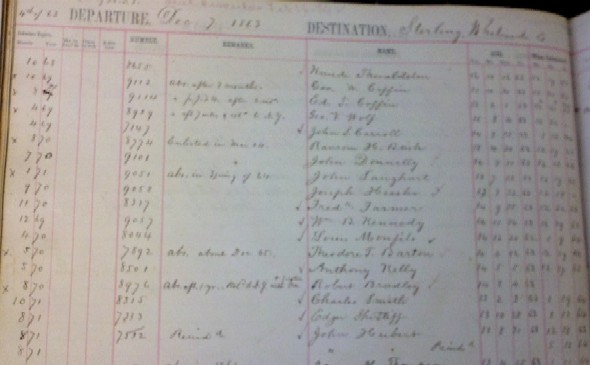 Placement did not mark the end of their relationships with NYJA, as the institution made efforts to track these children, sometimes arranging new placements, until they reached adulthood. The surviving records include an agent’s register (1862-1868) and case notes (1854-1906) that may detail the case of an individual child for several years. Although the related correspondence has been lost, these records still provide a wealth of information about the experiences of these children.

In all, researching genealogy requests in the NYJA records has helped me to become more familiar with the records and the possibilities for research. The collection also provides an interesting glimpse into the lives of poor and orphaned children, and their difficulties, in the latter half of the 19th century.