Allen Ginsberg, poet, activist, and spiritual seeker, attended Columbia alongside Jack Kerouac, who met each other through mutual friend Lucien Carr. Kerouac, at that point, had left Columbia earlier. William Burroughs came into the fray as well, joining the group of friends in New York City.

Columbia celebrates Ginsberg with the annual Columbia HOWL, a celebration of the Beat generation’s birth at Columbia University and Ginsberg’s continued legacy in the arts. 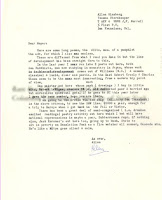 While at Columbia, Ginsberg took classes with Meyer Schapiro and continued correspondence with him after his school days at Columbia. Writing to Schapiro in the 1950s as a “Yeoman Storekeeper” from San Francisco, Ginsburg would say this about his artistic pursuits:

There has been a great deal of semi-organized (i.e. drunken excited readings) poetry activity out here which I bet will have national repercussions in maybe a year. Subterranean repr. if nothing else. Jack Kerouac’s out here too, going up to Wash. State to sit in povery on Desolation Peak as a fire watcher all summer, Cascade mts. He’s like a Mitya gone silent & calm.

If semi-organized means drunken excited readings, I wonder what an un-organized reading looked like? Hmm…that’s for another day.

In the meantime, you could probably get a better sense of mind altering poetry readings if you use one of William S. Burroughs’ Dream Machines, a flicker device that induces the viewer into another state of mind.

While you probably can’t officially use the Dream Machine for that purpose here at the RBML, you can certainly view one. The library holds one in the collection and you can read more about it here at the Curator’s Choice blog.

2 thoughts on “Allen Ginsberg and Howl”