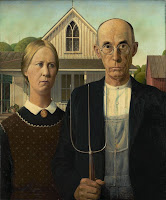 Perhaps one of the most parodied and iconic American images is that of Grant Wood’s American Gothic. The work was acquired by the Art Institute of Chicago after it was unveiled there to the public in 1930 to much scrutiny. Ever since, the painting has captured a certain resonance with the American public, but its historical reception has had somewhat of a turbulent ride.

As chronicled in the book American Gothic: a life of America’s most famous painting by Steven Biel, the painting has been redefined over the years ever since its initial unveiling in Chicago.

The painting began to gain traction as a viable American icon during the Depression, when the spirit of the times nurtured an environment of regional patriotism that dovetailed with the eras work ethic that rallied around the economic crisis. Alongside Thomas Hart Benton, another artist steeped in the artistic movement of Regionalism, Wood wholeheartedly embraced the ideal of capturing the American spirit through the arts. For the Regionalists, this was done by depicting everyday Americans stringently working for their country to better themselves and the nation.

But all was not so well on the home front for Mr. Wood.

According to a letter in the archive dated November 22, 1940, Lester Longman, head of the Department of Art at the State University of Iowa, wrote Meyer Schapiro the following:

The Art Department at the University of Iowa considers Grant Wood a very mediocre painter. Since certain members of the administration can’t understand how a professional judgment could differ from popular acclaim, I am having to get the opinions of a few authorities to present to the administration. I would appreciate it very much if you would write me a fairly complete statement of your views as one of the outstanding art historians and critics in the country.

Schapiro would respond to Longman:

Judging from these letters, one never really knows how history will write itself.

Wood’s pristine and detailed painting is stunning in its clarity and preciseness and, as an artist, his technique is quite extraordinary. Which begs the question: why would Iowa faculty members consider Wood a mediocre painter? One possibility is the backlash of the Regionalist movement that was fomenting at that time. As Abstract Expressionism slowly rose in prominence and international importance, Regionalism began to be eclipsed as a movement. The letter by Longman to Schapiro, however, came a little earlier in the decade. Nonetheless, it certainly gives a sense that a chapter was turning in American arts.

In a simple twist of fate, Jackson Pollack, Abstract Expressionist extraordinaire, was also a former student of Benton, the master of American regionalism.What’s interesting is that, in the end, the images of Wood and Benton are certainly as well known as a Jackson Pollack in capturing the look of a period: one from before the war and the other after.

In the end, Wood really did get the last laugh: his painting stands next to masterpieces like Leonardo da Vinci‘s Mona Lisa and Edvard Munch‘s Scream as truly recognizable and iconic across the world.