In anticipation of this weeks exhibition opening of “Looking In: Robert Frank’s The Americans” at the Metropolitan Museum of Art, I thought it a good moment to shed light on Meyer Schapiro’s role in helping Robert Frank with that particular photographic project, “The Americans.”

In the mid-1950s, Frank would travel throughout the United States to document the everyday life of Americans and would later publish those images as a publication: first in France in 1958 and then in the United States in 1959. The publication first premiered in France due to its raw and unflinching portrayal of an America that was a ethnically, socially, and economically diverse. It was as visually stunning as it was sociologically revealing, a combination that made The Americans an unrivaled artistic phenomenon. Jack Kerouac, then in his prime as a contemporary writer, wrote the introduction to the book and further cemented the publication as cutting edge.

For the publication’s 50th anniversary, the National Gallery of Art in Washington, D.C. organized the exhibit that will premiere at the Metropolitan this week. It later traveled to San Francisco’s Museum of Modern Art. I viewed the exhibit in D.C. and was stunned by Frank’s project as a whole and the process involved in getting it published. At that time, I wasn’t aware of Schapiro’s role in Frank’s project, as the exhibition didn’t mention his name directly (although the exhibition’s publication certainly does).

In 1955, Frank applied for the John Simon Guggenheim Memorial Foundation for a fellowship to “photograph freely throughout the United States” and “make a broad voluminous picture record of things American.”

For the application, Frank asked photographers Walker Evans and Edward Steichen to write a recommendation. He also turned to Meyer Schapiro, albeit in a hasty manner.

In a letter from October 24, 1954, Frank would write to Schapiro: “A few days ago I have sent in an application for a Guggenheim Fellowship. I have given your name as a reference. I have meant to call you and ask your permission. I am sorry that I have not done that and I only hope that I am not too optimistic when I ask for permission of a ‘fait accompli.'”

Two years later, Frank’s fellowship was renewed by the Guggenheim to continue his work on what would become The Americans and he would write Schapiro an appreciative letter: “I am very happy to write to you that I have been given a renewal of my Guggenheim Fellowship. This will permit me to conclude my project. Upon my return to New York I will be pleased to show you the results.” 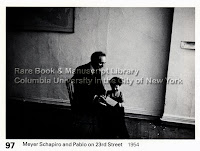 Meyer Schapiro would show up in Frank’s oeuvre under the title “New York Photographs.” The picture, to your left, was taken in 1954, the same year as Frank’s application to the Guggenheim Fellowship, and was exhibited at the Sidney Janis Gallery in New York City in 1979 alongside “The Americans.”

For a nice overview of Frank’s journey in publishing The Americans, visit this site created by the National Gallery in conjunction with the exhibition “Looking In.”