Meyer Schapiro, known as a prominent art historian, was also an artist. In a previous post, I wrote about Schapiro’s own art work housed in his archive and about the publication, Meyer Schapiro: His Painting, Drawing, and Sculpture, which illustrates a range of his artistic endeavors.

Given his fondness for art practice, it is no surprise that Schapiro was also very interested in individual artist’s methods. Apart from frequenting New York City art galleries and museums, Schapiro also visited artist’s studios. Frequently, he was given specific invitations or was requested to view an artist’s exhibition at a gallery. 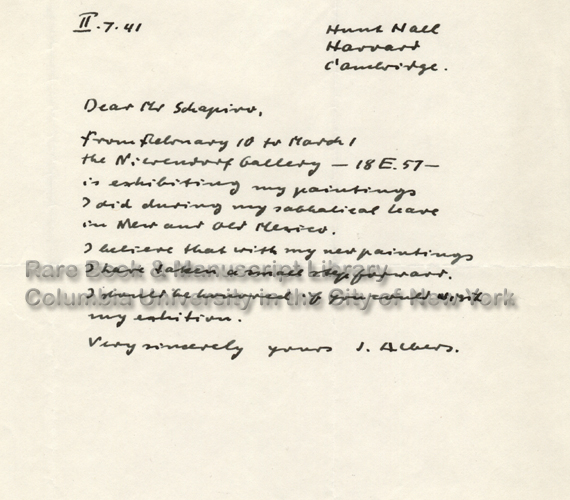 Take for instance this one personal invitation from the artist Josef Albers. Writing from Harvard University where he was teaching, Albers requests that Schapiro visit his exhibition in 1941 at the Nierendorf Gallery in New York. He writes:

"From February 10 to March 1 the Nierendorf Gallery-18 E. 57-is exhibiting my paintings I did during my sabbatical leave […]. I believe that with my new paintings I have taken a small step forward. I would be honored if you could visit my exhibition."

In another example, the artist Piet Mondrian invited Schapiro in March 1944 to view his works at his studio on East 59th Street of Manhattan. 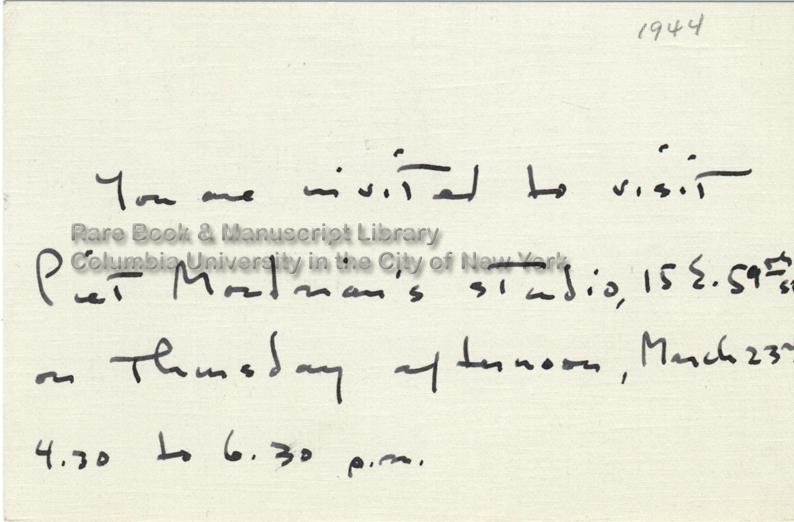 Another artist’s studio Schapiro visited was that of Fernand Léger in 1942. 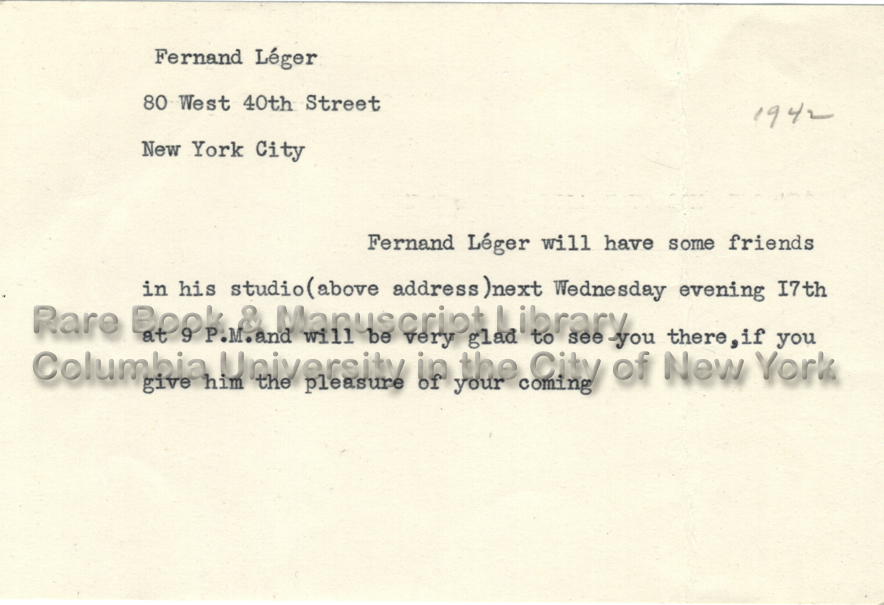 Schapiro met Léger seven years earlier in 1935 and wrote an extensive essay about their encounter.

This unpublished essay gives an insight into how Schapiro discussed and looked at paintings with artists. The act of looking, as is evident in many of Schapiro’s writings, is a central part of his scholarship.

Schapiro and Léger met at the Museum of Modern Art by appointment, where Léger was to accompany Schapiro through his exhibition.

Schapiro wrote: "He asked me what questions I wished to ask …, whether I had a questionnaire -as if I were a journalist. It was a little difficult to make clear to him that I had no prepared questions in mind, but simply wanted to look around with him and discuss things as they came up." 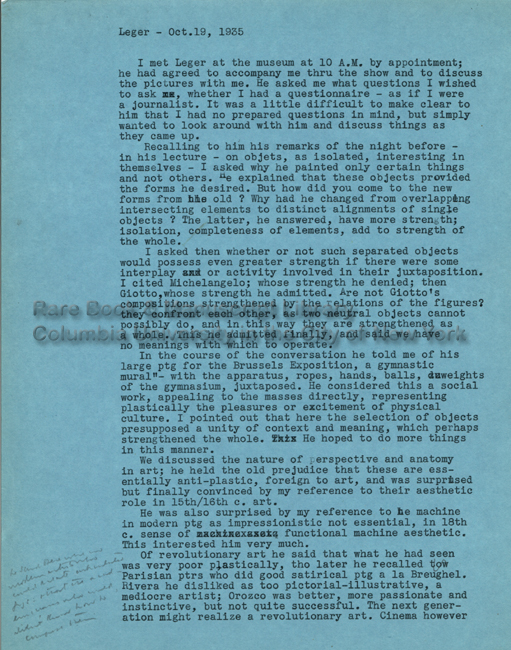 Looking is one exercise Schapiro was passionate about and the above excerpt gives a glimpse of its importance. The act of looking preceded the questioning. Questions, and the theories they sprouted, were to be deftly constructed after the process of looking. A common thread in Schapiro’s writing is that looking and perceiving both unlock potential stratagems from which to understand the visual.

And Schapiro’s visit with Léger is no different. Schapiro writes:

"Recalling to him [Léger] his remarks of the night before–in his lecture on objects, as isolated, interesting in themselves–I asked why he painted only certain things and not others. He explained that these objects provided the forms he desired. But how did you come to the new forms from the old? Why had he changed from overlapping, intersecting elements to distinct alignments of single objects? The latter, he answered, have more strength; isolation, completeness of elements, add to [sic] strength of the whole.

I asked then whether or not such separated objects would posses even greater strength if there were some interplay or activity involved in their juxtaposition. I cited Michelangelo; whose strength he denied; then Giotto, whose strength he admitted. Are not Giotto’s compositions strengthened by the relations of the figures? They confront each other, as two neutral objects cannot possibly do, and in this way they are strengthened as a whole. This he admitted finally, and said we have no meanings with which to operate."

This conversation must have been as intellectually vigorous as it was animated and gives a nice picture of Schapiro’s interactions with artists. Of course, while I have kept my above references to the 1940s, Schapiro was extremely active interacting, discussing, and engaging with artists throughout his life.

One such artist is the photographer Robert Bergman, whose exhibitions are now currently at the National Gallery of Art and MoMA’s P.S.1. In an interview with the "Brooklyn Rail," Bergman captures Schapiro’s enthusiasm for art when he says: "Meyer’s intellect was driven by fire. We all know genius level IQs who bore us. Meyer was driven by fire. I used to think of the closing stanzas of the Divine Comedy ‘my will was moved by the will that moved the sun and all the other stars.’ His interest in art was moved by will, not by arid intellect; his intellect was only in the service of the fire inside him, the passion for art."