The Columbia University Libraries are pleased to launch a new online exhibition, "Frances Perkins: The Woman Behind the New Deal." Frances Perkins (1880-1965) is no longer a household name, yet she was one of the most influential women of the twentieth century. Government official for New York State and the federal government, including Industrial Commissioner of the State of New York from 1929-1932, Perkins was named Secretary of Labor by Franklin Delano Roosevelt in 1933. As FDR’s friend and ally, Perkins would help the president fight the economic ravages caused by the Great Depression and make great strides toward improving workplace conditions. 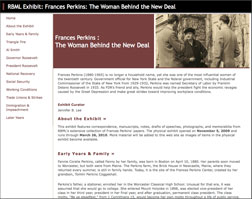 This online exhibition complements the physical exhibit running through the end of March in the Rare Book & Manuscript Library (RBML). Both exhibits feature correspondence, manuscripts, notes, drafts of speeches, photographs, and memorabilia from RBML’s extensive collection of Frances Perkins’ papers. Material is continually being added to the website as images of items in the physical exhibit become available.