On Monday, December 3, Sharon Marcus, Orlando Harriman Professor of English and Comparative Literature, Columbia University, will be presenting a lecture on "The Golden Age of Theatrical Scrapbooks, 1880-1930." The event is free and open to the public and will take place in 523 Butler Library at 6pm. 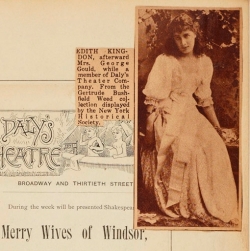 Theatrical scrapbooks are some of the least utilized documents in theater history archives, yet also among the most useful, replete with cast lists, advertising imagery, ticket stubs, theater programs, seating charts, and clippings of reviews and articles.  This talk provides a history of the theatrical scrapbook in the United States during the golden age of theater, 1880-1930, as well as a formal analysis of the traits that define theatrical scrapbooks as a genre distinct from other kinds of albums popular during the nineteenth century.  These materials illuminate a few key problems in theater studies, including the status of the dramatic author; the relationship between theater and film; and the notoriously elusive bond between stars and fans, actors and audiences.

Sharon Marcus is the author of Apartment Stories: City and Home in Nineteenth-Century Paris and London (1999) and Between Women: Friendship, Desire, and Marriage in Victorian England (2007), which won the Perkins Prize for best study of narrative, the Albion prize for best book on Britain after 1800, the Alan Bray Memorial award for best book in queer studies, and a Lambda Literary award for best book in LGBT studies. With Stephen Best, she edited a 2010 special issue of Representations on "The Way We Read Now."  This talk comes from her current book project on theatrical celebrity in the nineteenth century.