The Columbia Spectator Archive now includes content from 1953 to 1992, totaling nearly 50,000 pages.  The website, initially launched in Fall 2012,  represents the first phase of a multiyear project to digitize the full run of the Columbia Spectator, Columbia's student newspaper and the second-oldest college daily in the United States. When completed, it will include issues from the paper's beginnings in 1877 to the present. 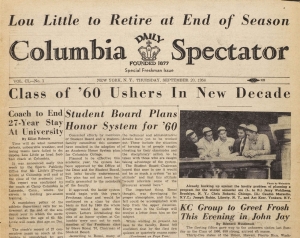 The goals of the Archive are to provide a public resource for Columbia University history and to preserve the Spectator's past work. Whenever possible, Spectator issues were scanned from the original paper versions, and high-quality, color digital reproductions were generated.  State-of-the-art optical character recognition, automatic text parsing software, and a powerful search and display system, provided by Digital Data Divide and Digital Library Consulting, respectively, allow for article-level access as well as full text searching of the entire Archive.  The project, which is being jointly funded by the Libraries and the Spectator, has been challenging as many of the original volumes required paper repair and conservation due to their fragile condition from years of use.