Almost two years ago, on Dec. 11, 2012, immediately after the New York Times reported that Mo Yan received the Nobel Prize in Literature, Jim Neal, Vice President for Information Services and University Librarian, asked me if we could invite Mo Yan to lecture at Columbia and I told him I will try.  Since then, I worked on this issue with the Chinese Consulate General in NY, the Office of the President, and Prof. Lydia Liu, Wun Tsun Tam Professor in the Humanities, Department of East Asian Languages and Cultures and the Institute for Comparative Literature and Society.  Finally, an invitation letter signed by President Bollinger, was sent to Mo Yan through Mr. Cai Wu, the Minister of Culture, People’s Republic of China.  Mo Yan agreed to come to give his first lecture in North America after receiving his Nobel Price on Nov. 7, 2014.

Mo Yan with Provost Coatsworth and departmental and library representatives

Mo Yan’s lecture was held in Columbia’s most prestigious venue, the Rotunda of Low Memorial Library, with a complete full-house of 400 enthusiastic audience members, while more than 600 additional people remained on the waiting list.  John Coatsworth, Provost of the University and Professor of International and Public Affairs and of History introduced Mo Yan before his lecture, and Lydia Liu, Wun Tsun Tam Professor in the Humanities, Department of East Asian Languages and Cultures and the Institute for Comparative Literature and Society moderated the dialogue between Mo Yan and the audiences following the lecture.  Later in the day, James G. Neal, Vice President for Information Services and University Librarian hosted a lunch at Faculty House, to welcome and thank Mo Yan and his daughter Guan Xiaoxiao, with 21 EALAC and WEAI faculty members,  administrators, students, library staff and donors present. 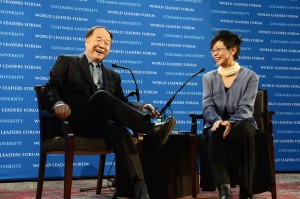 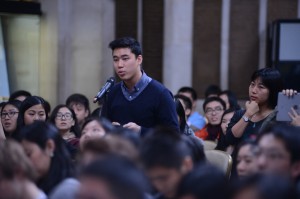 A student asks a question 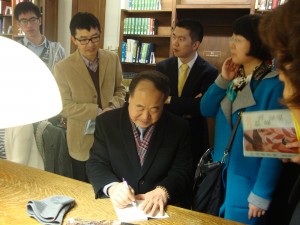 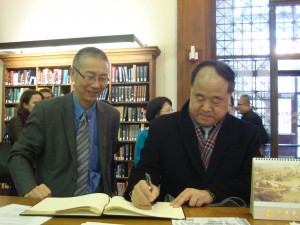 Based on my search, a total of 136 titles of Mo Yan’s works in different languages are held in Columbia University libraries.

Following are links to video recordings of Mo Yan’s lecture at Columbia: