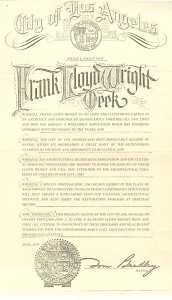 In 1978, June 2-9 was proclaimed as Frank Lloyd Wright Week in Los Angeles! Clearly his influence spreads all over North America. This document was found among Tafel’s papers, although there are no surrounding documents (so far!) to suggest who influenced the creation of Frank Lloyd Wright Week. Have a great one and do, as the proclamation states, ‘re-acquaint’ yourselves with Wright’s many contributions to modern day lifestyle.