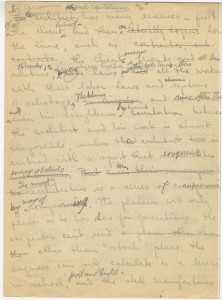 The Tafel blog is back after a short break after I was visiting ancient architectural ruins in Peru. And now back to contemporary architecture!

Edgar Tafel was a prolific architect who was very active in his field. Aside from seeking out building projects, Tafel also sought out publishers with book ideas in mind and completed manuscripts. The Writings series in Tafel’s archive sheds new light on this side of his professional life. The Writings series is split up into Tafel’s General Writings and his two books:

His second book, About Wright: An album of recollections by those who knew Frank Lloyd Wright, was published in 1993. For this book, Tafel contacted friends, family, and past apprentices for their personal memories of Frank Lloyd Wright and life at Taliesin. Tafel always valued opinions and memories of Frank Lloyd Wright from those who either personally knew or worked with him. Tafel worked on compiling and editing this book for over a decade: there is evidence in Tafel’s archive for the idea of this book germinating in the early 1980’s. The Writings series in Tafel’s archive also contains some recollections that were never published in About Wright including those by Theodore Baird (client of the Baird Residence, built in 1940), William B. Fyfe (an apprentice from 1932-34), Harwell Hamilton Harris (an architect and admirer who recalls meeting Wright when he was a student), and Iovanna Lloyd Wright (Wright’s daughter).

Aside from writing and editing his own books, Tafel was a frequent contributor to architectural journals and newspapers. He reviewed many books on Frank Lloyd Wright and was not afraid to voice his opinion on architecture in New York in letters to the editor columns. Writing seems to have been an early passion of Tafel’s; he also contributed to the Madison, Wisconsin newspapers during his Taliesin times. Wright also encouraged his apprentices to write: in 1934 he edited Tafel’s first architectural review “The Palace of the Soviets,” a critique of the Lenin Memorial and the International style. Pictured above is the first draft of this essay. Also included in the General Writings section of the archive are pieces about Tafel’s Hank Bookstaber House (finished 1950), William Wesley Peters, the importance of fireplaces, churches, and Wright projects such as his windows and residences.