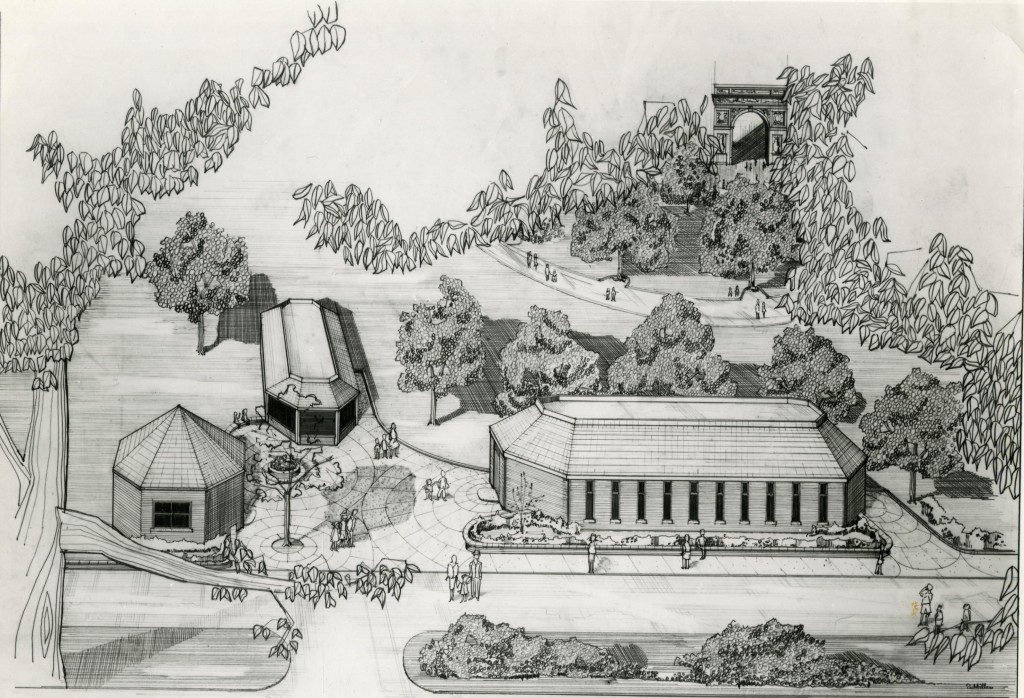 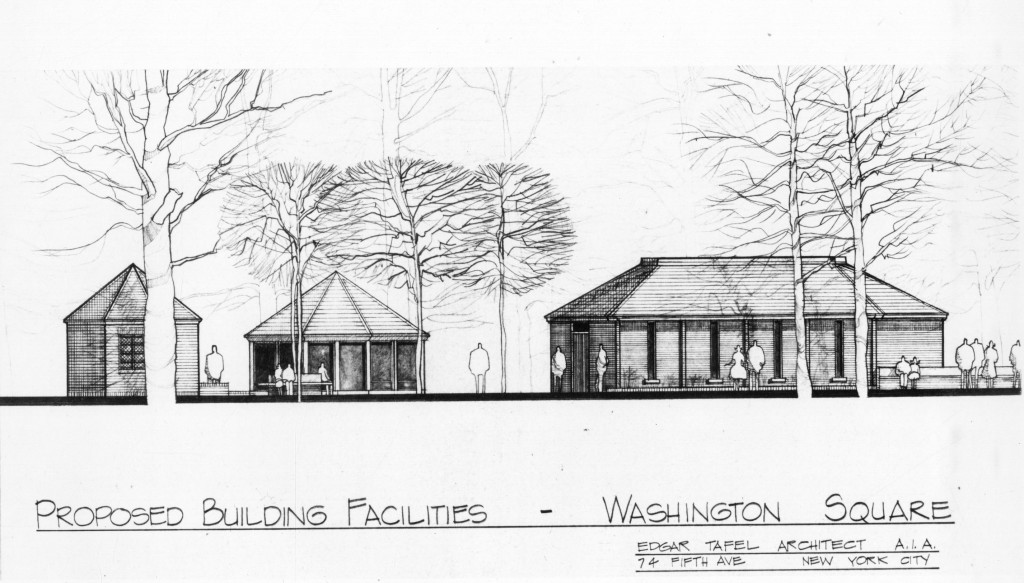 As can be seen in the archive, Tafel was mostly designing private homes, churches, and school buildings during his early career in the 50s and 60s. However, Tafel did work on some projects that were out of his usual scope. For example, in the early 1970s, the City was looking to revitalize Washington Square Park. Tafel’s drawings for three public buildings were chosen as the winning designs and can still be seen in the Park today.

Below is a drawing for Scottsdale Inn, a design for an unbuilt project in Scottsdale, Arizona. The design looks to have taken some inspiration from Taliesin West, which is also in Scottsdale. 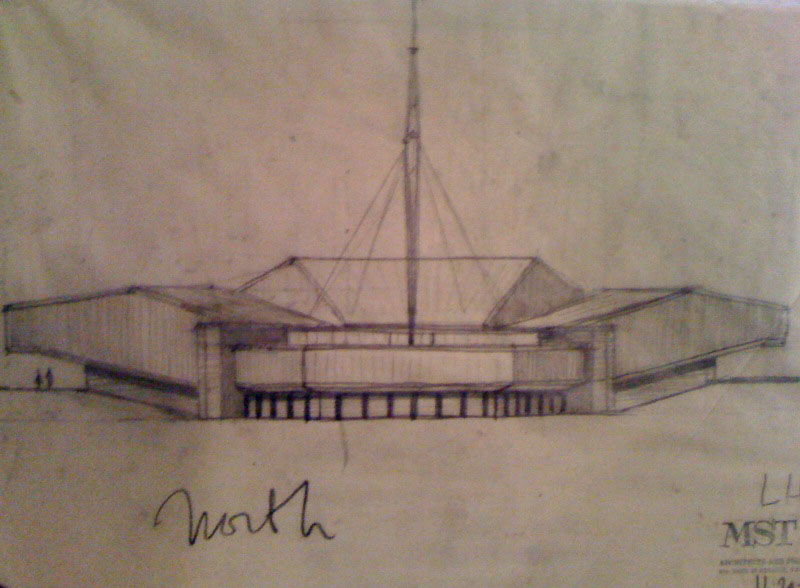 Pictured above is an elevation from 1963 of the lecture hall center at the State University of New York at Geneseo. The lecture hall center is now named Newton Lecture Hall. Tafel designed campus plans and several other buildings including the fine arts building (Brodie Hall), the administration building, the student union building, and several dormitories in a team with other architects including Rolf Myller and Richard Snibbe between 1963 and 1974. The plans for the University are among one of the projects that are very well-documented in the archive. As an architectural archivist, I have noticed that government projects and universities are the types of projects that have the most number of drawings saved by an architectural office. This is probably because of the large scope of the project and the large number of clients and stakeholders invested in the project! Nevertheless, both well-documented projects and smaller-scale projects are fascinating to look at, both from an archival and a scholarly point of view. 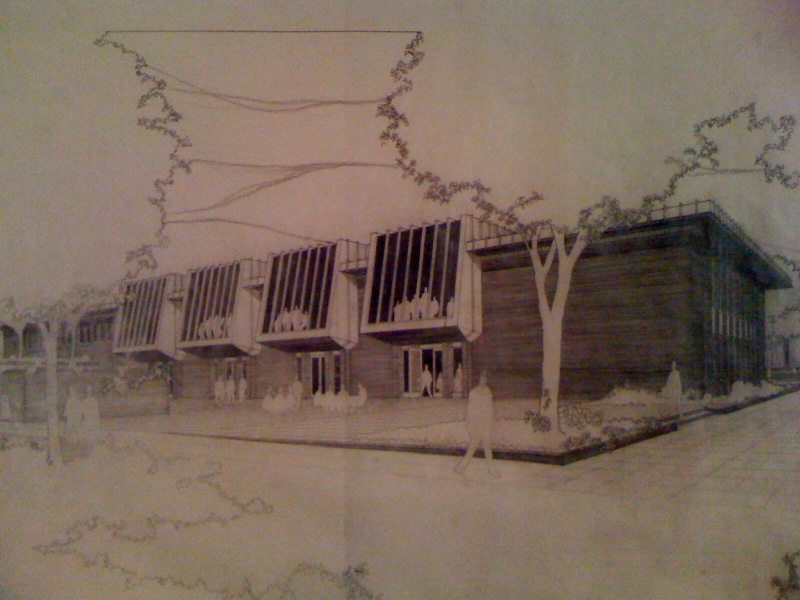 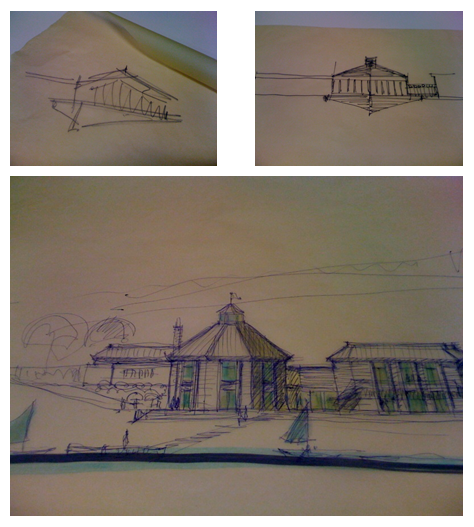 Edgar Tafel designed many projects including churches, colleges, and residences. Included in Tafel’s archive are drawings showing the progression from initial conceptual sketches to as-built drawings of both his completed and unbuilt projects. Pictured above are three sketches from Tafel’s project, the Twenty-First Century Institute in Vermont, drawn in 1974. The three drawings show the development of the main facade of the Institute which was meant to be a conference centre and office building. The sketches are very small but get larger as the idea for the building is fleshed out. These three drawings are only a selection of this project!  More of Tafel’s projects, both well-known or unbuilt, are to be featured on the blog soon. 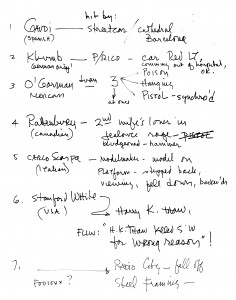 Edgar Tafel was a man of many interests and not just an architect, a writer, a public speaker, and a community activist. And even though the archive is cohesive as whole, bringing together what one would normally expect of an architectural archive (project records, office files), Tafel’s archive also reflects his many interests, especially in the Writings section and the Reference files section.

Alexandrina Buchanan in “Cardiff and Miller’s Road Trip” says that the material fragments of archives are “crying out for human interpretation, which represent creative starting points rather than the closed records of completed actions” (Archivaria 73, pg. 21). If we apply this to Tafel’s archive, one can see the records of his completed actions –his architectural projects, his books- but also interesting are the incomplete fragments of projects or research that demand attention.

We can see in Tafel’s archive which architects he was interested in: Tafel collected research on Louis Sullivan and Stanford White. He also collected architectural postcards from places he visited and lectured at, including India, England, and Italy. One curious fragment of Tafel’s research is pictured in today’s post: a list of 7 architects’ unusual deaths. Perhaps Tafel was interested in the uncommon because he had been surrounded by exciting and sometimes controversial events at Taliesin and those connected to Frank Lloyd Wright’s life.

END_OF_DOCUMENT_TOKEN_TO_BE_REPLACED

The Tafel blog is back after a short break after I was visiting ancient architectural ruins in Peru. And now back to contemporary architecture!

Edgar Tafel was a prolific architect who was very active in his field. Aside from seeking out building projects, Tafel also sought out publishers with book ideas in mind and completed manuscripts. The Writings series in Tafel’s archive sheds new light on this side of his professional life. The Writings series is split up into Tafel’s General Writings and his two books:

His second book, About Wright: An album of recollections by those who knew Frank Lloyd Wright, was published in 1993. For this book, Tafel contacted friends, family, and past apprentices for their personal memories of Frank Lloyd Wright and life at Taliesin. Tafel always valued opinions and memories of Frank Lloyd Wright from those who either personally knew or worked with him. Tafel worked on compiling and editing this book for over a decade: there is evidence in Tafel’s archive for the idea of this book germinating in the early 1980’s. The Writings series in Tafel’s archive also contains some recollections that were never published in About Wright including those by Theodore Baird (client of the Baird Residence, built in 1940), William B. Fyfe (an apprentice from 1932-34), Harwell Hamilton Harris (an architect and admirer who recalls meeting Wright when he was a student), and Iovanna Lloyd Wright (Wright’s daughter).

Aside from writing and editing his own books, Tafel was a frequent contributor to architectural journals and newspapers. He reviewed many books on Frank Lloyd Wright and was not afraid to voice his opinion on architecture in New York in letters to the editor columns. Writing seems to have been an early passion of Tafel’s; he also contributed to the Madison, Wisconsin newspapers during his Taliesin times. Wright also encouraged his apprentices to write: in 1934 he edited Tafel’s first architectural review “The Palace of the Soviets,” a critique of the Lenin Memorial and the International style. Pictured above is the first draft of this essay. Also included in the General Writings section of the archive are pieces about Tafel’s Hank Bookstaber House (finished 1950), William Wesley Peters, the importance of fireplaces, churches, and Wright projects such as his windows and residences.

A house designed by Edgar Tafel between 1948-50 is being threatened to be demolished. The house was originally designed for Carl and Marie Albert and is found at 4945 N. Main Street, in Racine, Wisconsin.

Read the original article here. A correction to the article states that the house may have been a collaboration between Tafel and others.

The Tafel archive contains his project files and drawings. The project files are in cue to be processed; it is possible that more information on the Albert House will be found!

Any updates on the house will be posted!