Since the presentations got cancelled a couple of weeks ago, I thought I might share my presentation in a blog post and summarize what I was going to say for each slide. 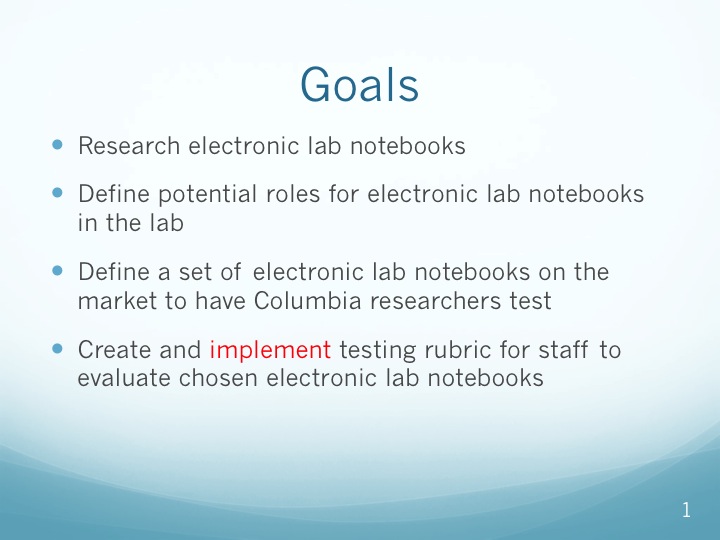 This outlines some of the major goals of my project.  Overall, I wanted to research some of the electronic lab notebooks on the market that had free trials, with the ultimate goal of getting faculty involved in testing the notebooks and giving me their feedback.  “Implement” is in red here because we’ve created the rubric and have chosen the notebooks, however, we are still waiting for faculty to test them out for us. 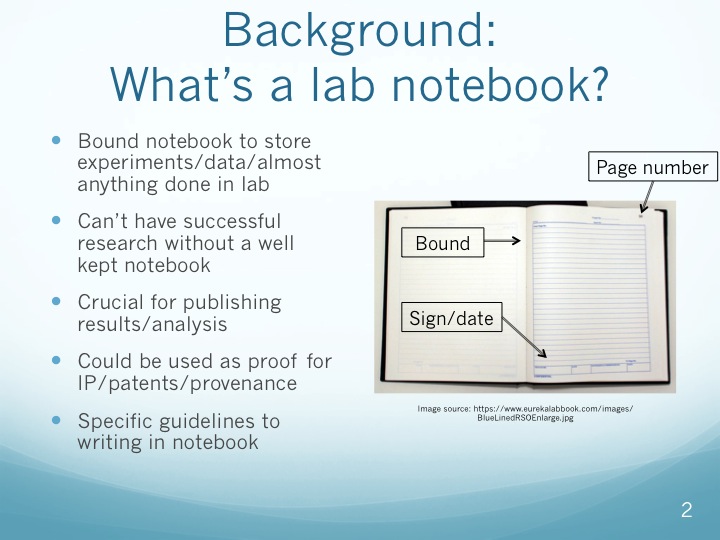 So what is a lab notebook?  A lab notebook is essentially the main documentation for most labs in terms of results, experiments, and analysis.  They are typically bound, and because they contain so much pertinent information, it is hard to be successful in your research if your lab notebook isn’t well kept.  Furthermore, the lab notebook could be used for things such as publishing your results, as well as proof for intellectual property and patents.  Because your results could be communicated through the notebook, there are specific guidelines that need to be followed to ensure all data is valid.  This includes, but is not limited to, having the notebook be bound, having the page number on each page, and signing/dating the bottom of each page. 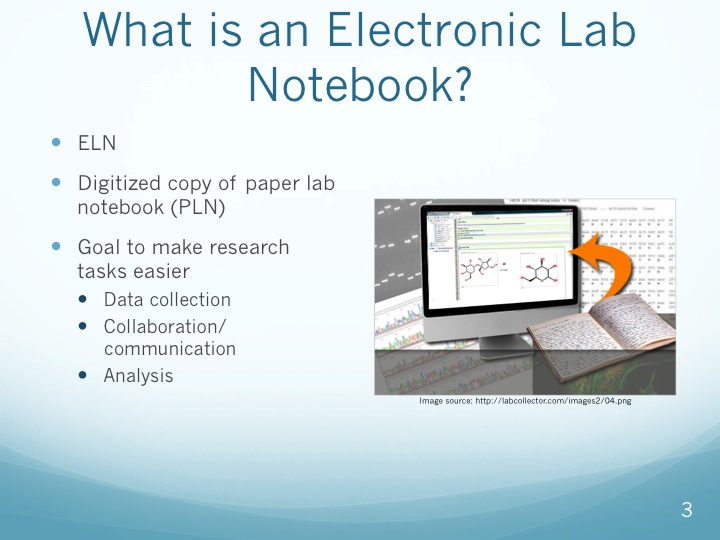 So, now that we have a general idea of what a standard laboratory notebook should contain, we can talk a bit about electronic lab notebooks.  From here on out I will be referring to electronic lab notebooks as “ELNs” and paper lab notebooks as “PLNs”.  An ELN is essentially just a digitized copy of a PLN that is designed to make research tasks easier.  These tasks range from automated data collection from devices, easy collaboration and communication, and the ability to analyze data quickly and efficiently. 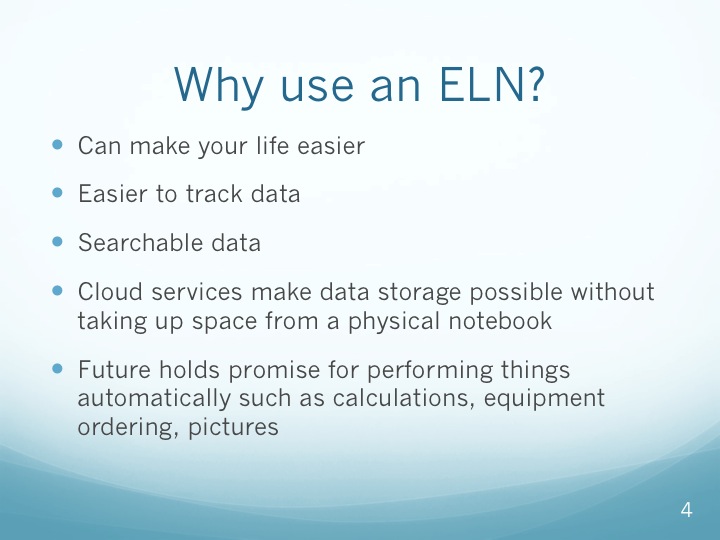 Why would we want to use an ELN?  As previously mentioned, it can make it much easier to not only add data to a project, but also track it as the project moves forward.  Because the notebook is digitized, all data that has been submitted to it can be searched and would allow you to search for the name of a reagent you used in an experiment 10 years ago.  ELNs also offer cloud storage that helps to eliminate the clutter that may be caused by a collection of PLNs.  The future of ELNs also looks promising for performing a lot of tedious things automatically such as simple calculations, ordering commonly used equipment/reagents automatically for you, and inserting data such as pictures. 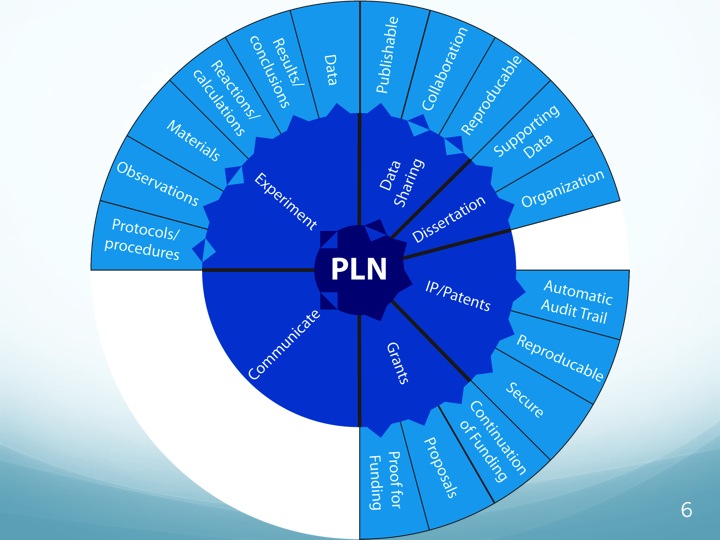 Before testing out some of the ELNs, I wanted to visually determine what specific differences were present between ELNs and PLNs.  To do this I made a chart that highlights 6 specific sections of lab notebooks, each of those sections splitting up into various sub sections.  The arrows represent the flow from one section to another.  For example, within your PLN you will have experiments.  These experiments will have protocols and procedures.  Now, coming back in, say you have an idea for an experiment.  You would create a protocol and procedure for that experiment, which would ultimately go into the PLN.  After making this graphic, it was pretty apparent that PLNs lacked a communication piece, as is illustrated by the blank section after communication. 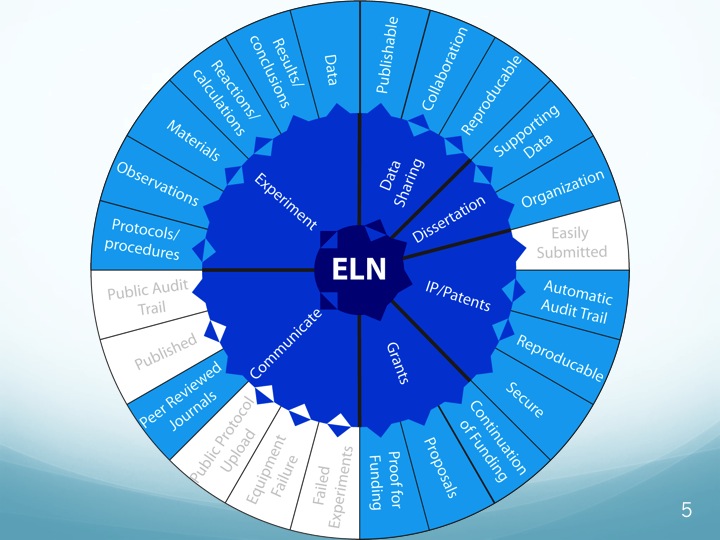 Now, if we display the ELN properties in the same graphic, you’ll notice that the communication section starts to become filled in.  The new white sections with grey text represent the potential attributes that ELNs could have in the future.  This successfully illustrates the importance of ELNs for research communication, which is extremely important to not only present the work you’ve done, but also collaborate for future and current work. 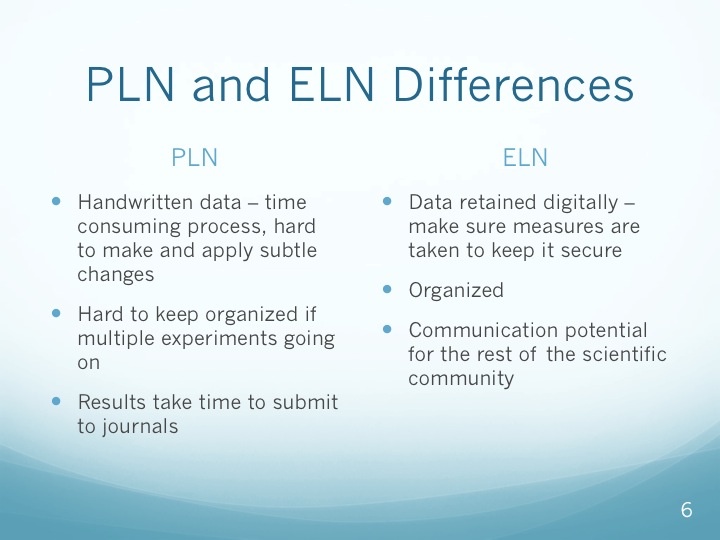 Here is a side-by-side comparison of some additional differences between PLNs and ELNs.  First, and most obvious, is that PLNs require you to handwrite most of your experiments, which could be time consuming and frustrating if a minor change needs to be made.  ELNs, on the other hand, retain all of your data digitally, making it easy to not only add data, but also make changes if necessary.  Because the data is stored digitally, this can make the notebook much more organized and allows you to separate your experiments easily, instead of trying to keep track of each experiment and which PLN/page number it is in.  Finally, as mentioned earlier, the communication aspect of ELNs make it appealing in terms of time taken to submit/share data.  Imagine if there was some sort of social networking site for researchers where they could publish any result directly from their ELN and get feedback.  This is one thing that isn’t possible with PLNs, resulting in more time spent actually asking for advice or publishing data as opposed to continuing research. 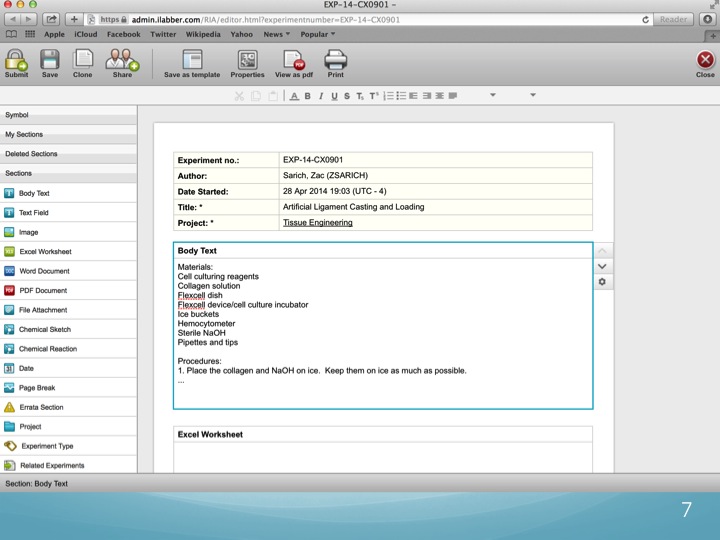 Here is a screenshot of one of the ELNs we chose.  Most of the other ELNs were set up like this, where there are widgets on the side that can be dragged into a continuous document.  You can see here, I have a body text widget with some materials and the start of the procedures, and below that I have an Excel worksheet.  The widgets make it very convenient to add new things or go back and change new things that you wouldn’t be able to do in a PLN.  For example, if I make a mistake in analyzing my Excel data, I can simply change it directly from within the ELN, whereas in a PLN, I would have to open up Excel on the computer, change the data, print it out, and replace the old data by cutting and pasting the new data on top of it.  This saves an incredible amount of time in the long run and makes it easy to ensure that all of the correct and necessary data is present in the ELN. 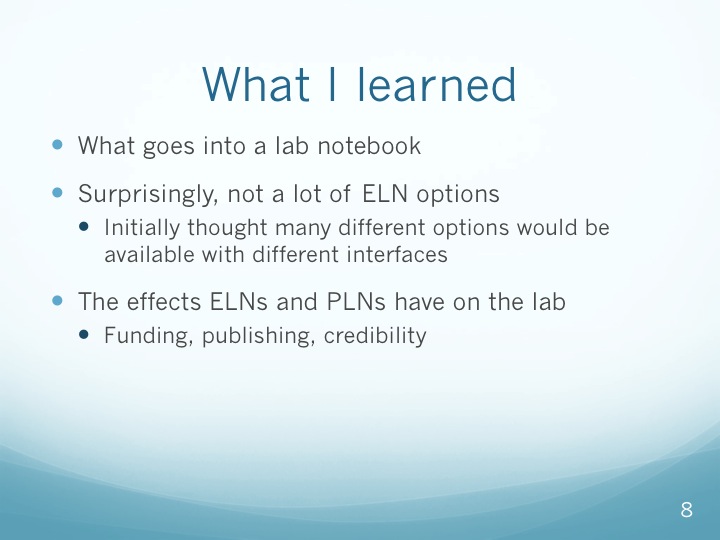 So what did I learn from this project?  First off, I learned about what types of data would go into a lab notebook, from graphs, to calculations, to materials, as this could have an impact on which ELN a professor would decide to use.  Second, I was surprised at the lack of ELN options.  Coming into this, I assumed there was some sort of iPad/stylus interface that could be written in like a regular lab notebook, but also had some of the widget capabilities explained earlier.  However, I found that most ELNs are web-based programs that need to be run on a computer and don’t quite have the portability I was expecting.  Finally, I learned about how any lab notebook can have a great impact on the lab, and it’s important that it is not only easy to maintain, but can be done in a way that will be able to support the experiments performed. 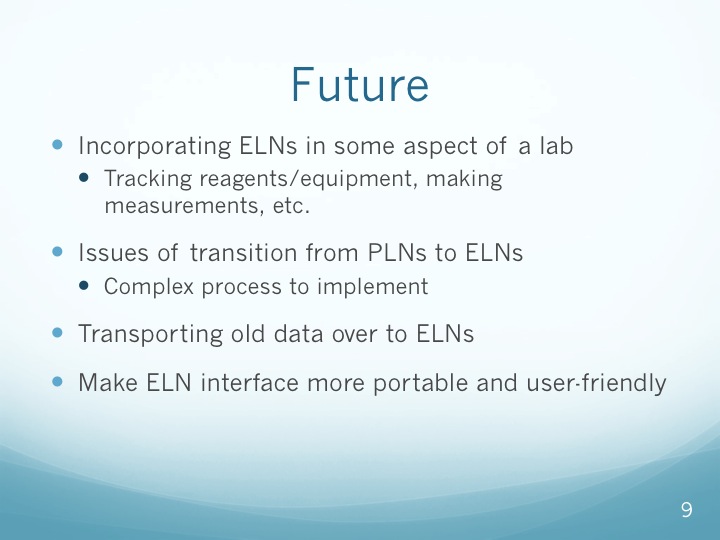 While ELNs still aren’t the primary use for a lab notebook, I think that there is a potential future for them in the lab.  First, I believe that at some point, most labs will adopt ELNs to take care of certain tasks, whether it’s simple things like tracking reagents/equipment, or something more intricate like keeping all of the data and making measurements.  However, one thing I think that’s holding people back from this is the complex process that is required to transition from PLNs to ELNs.  This would usually involve a company representative training the staff on how to use the notebook, as well as implementing a server to aid in cloud storage.  On top of that, if an ELN is going to be adopted university-wide, it could take months to actually get the system up and running since more people would need to be trained.  Furthermore, the process of transporting the old data from PLNs to ELNs would take time, and many researchers might not be willing to put in that much effort to make everything digital.  Finally, if companies would like to see more incorporation of ELNs, I would suggest trying to make them more portable and user friendly.  As I mentioned before, most of the ELNs now are web-based apps and can be somewhat cumbersome and slow to work with; therefore, a cross-platform, stand alone app might be a better option.

I’d be happy to take any questions anyone has.  Just post in the comments and I’ll try to get back to you!